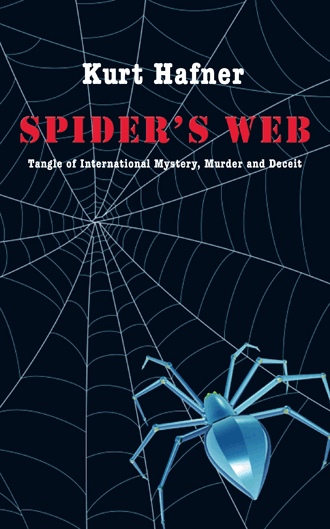 South West Florida The night was dark, like velvet, peaceful and almost silent except for the rhythm of the waves that lapped the beach just beyond the last buildings of the resort. A gentle breeze fanned the shards of palm trees in the neat and tidy grounds. An occasional raccoon scurried amongst the bushes and investigated the vicinity of the barbecue areas which had been used the previous evening. All of the apartments were in blissful silence and darkness except for 7c where the window was partially lit and enlivened by the flickering of the television which illuminated the surroundings with the various colours, shades of darkness and light of the transmission. Rolf Brenner was awake and had been for hours, unable to sleep, unable to concentrate, restless and oblivious of any details of the programmes being screened at this time of the night. His emotions were volatile and his mind in turmoil, switching from excitement to doubt, from determination to concern, from confidence to guilt and yet were full of anticipation and pleasure of what this challenging day might bring. Sabine and the children were blissfully unaware that he was wide awake and they were undoubtedly dreaming of another magical day on the island. The family had enjoyed a wonderful week of leisure, swimming, bike rides, excursions and boat trips since their arrival just over a week ago. The beach was just perfect and they appreciated an opportunity to read and to reflect after a really busy summer. Their home in Hampshire now seemed much further away than the actual mileage between South West Florida and England, because they had quite simply switched into island mode as they did every year with only occasional thoughts about their business, their home, the schools and the many details of everyday life. It was the call that Rolf had intercepted quite late last night, that might now change their lives forever, a life that had been shaped by his privileged background and enhanced by so many positive elements that only the brightest and most perfect future seemed destined for him and his family. That was until a few hours ago! As he poured himself and quietly sipped another glass of Californian Merlot, he felt slightly more mellow, comfortably reflective and his mind wandered back to how it all started and to the many important stages in his life which had brought him and his family such happiness and success. His German parents had arrived in England just shortly after the second World War and developed a prosperous jewellery business in Farnham, Surrey's charming old town situated on the Hampshire border. Growing up as part of a close family with loving parents and his two younger sisters was a perfect start and his progress through school, college and university where he was well liked and popular, proved to be an exciting adventure. He achieved excellent grades and ultimately a degree in electronics. Most of all he cherished the memories of his early relationship with Sabine, a fellow Student whom he had met during his period of post graduate placement in Germany. His thoughts flowed back to the cold and windy October day eighteen years ago, when he had got to know her by pure accident on the bridge that crossed the moat of the ancient town of Waldshut in Southern Germany, not far away from the Swiss Border. Sabine carried a tray of confectionary that she had purchased in the specialist bakery and pastry shop where an enticing display of gateaux, chocolate creations, specialties and pastries offered delicious temptations which were impossible to resist, just round the corner from the mighty tower which dominated the entrance into the town. As she walked through the portal of the ancient building she was caught by a gust of wind which blew her scarf across her face and momentarily blinded, made her collide with an oncoming pedestrian who just managed to steady her and to secure the delicious goods whilst allowing her to recover and regain her composure. Rolf was immediately attracted to this lively, fresh faced, blond girl with such an unspoilt complexion, dark violet eyes and her fair hair worn in a neat single plait. Her profuse apologies were met with a smile and a suggestion that a cup of coffee or hot chocolate might be just the perfect remedy, prior to venturing out into the inclement weather once more. Sabine Herrberger accepted without hesitation, was intrigued by this handsome young English man, consumed several cups of coffee in addition to two giant portions of delicious gateau and chatted non stop until the clock on the old town hall struck five and reminded her how very late and overdue she was to return home and to prepare dinner for her family. Rolf was simply smitten, arranged to meet Sabine the following Wednesday and as he drove back to his apartment just outside Koblenz on Lake Constance he was unable to concentrate on anything other than his new acquaintance. What a lovely, lively girl and so natural and animated with happy, sparkling eyes he thought and a most enthusiastic way of chatting and telling him about her background that was quite different to his own but full of exciting challenges and characterized by the young woman’s determination to succeed despite the early difficulties that she had encountered. Rolf recalled every detail of what he had learnt about Sabine's childhood as the oldest of seven children which was quite different to Rolf’s safe and comfortable background. She led a demanding life because of her mother’s serious illness and early death when she was still in her teens. Her father's modest income as a farm labourer made it difficult for the family to survive but Sabine was determined to succeed and in order to improve the fortunes of their meagre existence, she embarked on an ambitious plan to create a better future for them all.

Intrigue, Greed and Murder culminate in a dramatic Conclusion to this International Web of Mystery and Deceit Rolf and Sabine Brenner’s company and its USA subsidiary are flourishing as the Millennium approaches but their holiday on the Gulf Coast of Florida is marred by a terrible accident. - At the same time an ambitious and ruthless social climber is developing his predatory plans in England in order to acquire wealth and power in a vicious game of removing anything that may stand in his way. A mysterious suspect is being tracked on his way to Miami by a young woman who is already an expert in fighting organised crime but unaware of the danger that she will meet after her arrival in the United States. A highly respected Aristocrat and powerful business investor travels by Concorde to New York in order to protect Brenner Inc. from collapse where he teams up with his celebrated and glamorous lawyer to face the subversive elements at large. A brilliant police graduate with roots in the Bronx mounts a major campaign to identify, hunt down and eliminate the gang that has invaded Manhattan and caused major problems in Chicago. - A Harvard Professor and his family become embroiled in the fall out of intrigue and duplicity until their daughter Fiona decides to fight back and to confront the dark forces involved. The action moves from an idyllic island off the West Coast of Florida to the English countryside until an attack takes place in Switzerland. New York, Miami and Chicago provide the background to an increasing number of sinister incidents until their dramatic conclusion is reached and the different pieces of the puzzle finally fall into place - But is the Spiders Web complete?

Kurt Hafner Kurt was born, educated and trained in his native Switzerland where he demonstrated creativity and imagination from an early age - His first romanticised novel of ‘Two School Boys Stalking Wildlife’ was published shortly after his 16th birthday. His career as a Senior Manager with global responsibilities for one of UK’s premier companies flourished including the Chairmanship of a Europe wide trade association. He became recognized as an authority in his field of hospitality, contributed to publications and lectured at universities in England, Switzerland and France. Kurt now runs his own business from his home in Surrey where he provides a specialist consultancy service to premium clients - Kurt and his wife Mary have been married for almost fifty years, enjoy the company of their dogs and take great delight in their three daughters and their families who live nearby. This is Kurt’s first dramatic thriller – and the prelude to future novels of intrigue and mystery.