Forgotten Sculptor of the Victoria Memorial 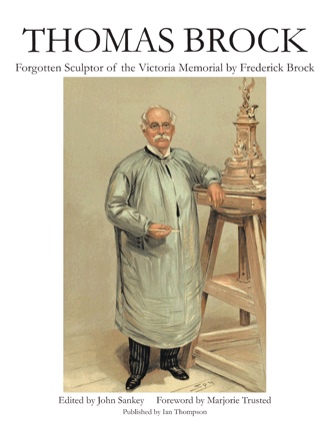 The Victoria Memorial in front of Buckingham Palace is a national icon, yet few have heard of its sculptor, Thomas Brock. He left school at 12 to be an apprentice at the Worcester Royal Porcelain Works, then joined the London studio of John Henry Foley. He completed the figure of the Prince Consort for the Albert Memorial after Foley’s death. One of the young sculptors encouraged by Sir Frederic Leighton, he became famous for his lifelike portrait statues of Queen Victoria, Edward VII, Gladstone, Millais and other public figures. Chosen in 1901 as sole sculptor of the Victoria Memorial, he was knighted by King George V at its unveiling in 1911. Brock’s remarkable story is told by his son Frederick in this entertaining biography, written in the 1920s and now published by permission of the Victoria and Albert Museum. “A highly readable and intriguing perspective on a sculptor’s life in the late 19th and early 20th century, one which reveals as much about the art world of his time as about the individual whose life forms its subject. … John Sankey has worked extensively on Brock and his edition of these memoirs is exemplary.” Dr Marjorie Trusted (Senior Curator of Sculpture, Victoria & Albert Museum) ‘An astonishingly thorough record of the life of a sculptor who, a hundred years back, distilled from European traditions an idiom which now seems to be the appropriate – indeed almost the only imaginable – backdrop to royal ceremonial. … In bringing this record to a wider readership, John Sankey reveals some of the less well-known facets of Brock’s extensive sculptural oeuvre, disseminated around the globe from Copenhagen to Wellington (NZ)’ Philip Ward-Jackson (formerly Conway Librarian, Courtauld Institute of Art)

Frederick Brock (1880 - 1940) acted as private secretary to his father Sir Thomas Brock, sculptor of the famous Victoria Memorial and President of the Royal Society of British Sculptors. His biography of the sculptor is eminently readable and gives a fresh insight into art and life at the turn of the twentieth century.