The Sword and the Green Cross

The Saga of the Knights of Saint Lazarus from the Crusades to the 21st Century. 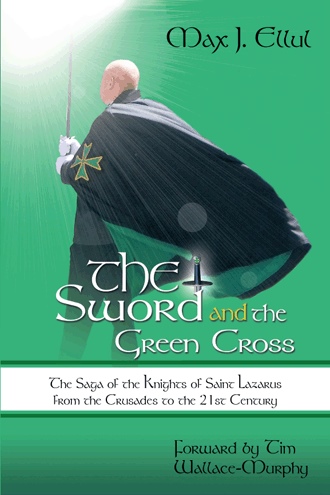 It is taken for granted in most of the present day civilized world that a visit to the pharmacy, chemist’s or apothecary is a must to procure the prescribed medicine and thus aid and assist the cure of normal ailments. What is not taken for granted is that, to this day, most of the Western world’s symbol of a pharmacy or a chemist’s is indeed a green cross. Why is the cross green? Not red or black or blue. Green.


This green cross owes its controversial birth pangs to the tumultuous happenings of the first crusade and its immediate aftermath. The green cross came to project one of Christendom’s monastic orders of knights, commonly known as the Order of Saint Lazarus. The latter owed its creation to the Latin Catholic church which today is supposed to symbolise the epitome of peace, humility and an abhorrence of war and murder, even when such blood is spilt in the name of a supposedly merciful God.


Although the Old Testament frequently portrays the Almighty as a God of wrath and vengeance, modern – day Christian apologists try hard to neglect whole centuries of Christian history where the words of Exodus were indeed the order of the day:


The purpose of this book is to inform the reader of the past and present Order of Saint Lazarus, putting such a religious and military organisation in its proper historical perspective and to, slowly but surely, cast off a huge amount of interpolations and inaccuracies regarding this subject matter.


This is a difficult task, primarily because the collective mental image of a knight normally takes the shape of the widely popular Knights Templar or the Knights of Saint John. Indeed, these two Orders of Knighthood emanating from the harsh crusading centuries totally eclipse all other Orders of Knighthoods in terms of popularity and myth.


Needless to say, one will find numerous web pages throughout the internet, together with promotional and propaganda material from several organisations, all projecting themselves to be the authentic Order of Saint Lazarus. They all have their own version of events, most of which start depicting the Order of Saint Lazarus from the crusading period. Fact is frequently juxtaposed with fiction and fantasy. Fallacies and wholesale neglect of the historical evidence have been purposely and strategically intermingled with contemporaneous accounts in order to validate this, or that, version of spurious history. On the other hand, one will also find a number of very serious publications and web pages dedicated to the works of prestigious historians who maintain that there is no real present – day chivalric Order of Saint Lazarus and that such above-mentioned web pages are operated by bogus ‘Orders’, accredited and acknowledged by no one other than themselves. The conservative and non-sensationalist Catholic Encyclopaedia has stated that


‘…the historians of the Order have done much to obscure the question by entangling it with gratuitous pretensions and suspicious documents.’


Although this may indeed seem a harsh statement to be splattered across the introductory pages of a book analysing the history of the Order throughout the ages, one must ensure that such a work is projected, from the outset, in a factual manner in order to exclude the possibility of misinterpretation of the subject matter.


The Order of Saint Lazarus has to be examined with constant reference to the prevailing backdrops of the day. One cannot fully understand a monastic order of warriors unless one scrutinizes the period of the crusades. The crusades also need to be analysed as a political and religious by-product of the papacy and its then constant and self-attained prerogative of integrating its spiritual authority with its temporal authority.


The history of the Order of Saint Lazarus touches on the lives, norms, practices and customs of societies spread across the globe and, consequently, spreads across decades and centuries. It will touch on long forgotten mores and norms, extinct empires and kingdoms, and - unfortunately - wars, intrigues, treachery and over-zealousness. There are both heroes and scoundrels in this history. There are pious men who gave much to the Order of Saint Lazarus and there are crooks and con men that gave the Order a very bad name.


This book will try to give a fresh, albeit factual, outline of the Order of Saint Lazarus and also examine the numerous organisations bearing the name of Saint Lazarus in the modern world.


But first, before we embark on our journey across time and continents to savour the mark of the Order throughout the centuries, let us answer a very simple question.


Without a clear perception of the term ‘chivalry’, one cannot even start to address the history of the Order of Saint Lazarus.


Although the military orders are also referred to as chivalric orders, chivalry - as a system per se of ethical ideals - arose from feudalism and reached its highest development in the 12th and 13th centuries. Chivalric ethics originated chiefly in France and Spain and spread rapidly to the rest of mainland Europe and to England. They represented a fusion of Christian and military concepts of morality and still form the basis of gentlemanly conduct. Noble youths became pages in the castles of other nobles at the age of seven; at fourteen they trained as squires in the service of knights, learning horsemanship and military techniques, and were themselves knighted, usually when they reached the age of twenty one.


The chief chivalric virtues were piety, honor, valor, courtesy, chastity, and loyalty. The knight's loyalty was due to the spiritual master, God; to the temporal master, the suzerain; and to the mistress of the heart, his sworn love. Love, in the chivalrous sense, was supposedly largely platonic; as a rule, only a virgin or another man's wife could be the chosen object of chivalrous love. With the Roman church’s cult of the Virgin Mary, the romanticized elevation of noblewomen on a pedestal reached its highest expression. At least on paper.

tumultuous events surrounding the First Crusade and the ensuing centuries of struggle for the conquest of the Holy Land has reverberated throughout the centuries and affected our collective psyche to this date. ‘The Sword and the Green Cross’ offers a minutely researched analysis of the creation of one of the monastic and military Orders of the period: the Knights of Saint Lazarus.


Devoid of the chequered popularity of their contemporary Knights Templar or the Knights of Saint John, the Knights of Saint Lazarus, with their green cross and invariable care of lepers and other afflicted pilgrims, nobles, knights and peasantry, offer the reader a fascinating history of diplomacy, military exploits, survival instinct and a legacy which has permeated throughout time. The book explores the Order’s birth in the Outremer, its expansion and Papal sponsorship, its constant interaction with the Templars and the Hospitallers and its tremendous growth in Europe which later justified its lengthy operations on the Continent even though the Holy Land was lost to the Crusades.


The book analyses its complete change from a Papal Order to a Monarchical Order under the benign overseeing of the French Kings and dwells at length on the immediate and long term ramifications of the French Revolution and the Order’s demise.


The ‘Sword and the Green Cross’ colourfully projects the period in which the Order flourished and illustrates prominent Lazarites from throughout the centuries. It also minutely dissects the modern day revivals of Lazarite organisations worldwide and, by means of hitherto unpublished documentation, sifts through the interpolated myths of such a revival and its magnetic allure to thousands worldwide.


With a forward by best-selling author Tim Wallace Murphy, ‘The Sword and the Green Cross’ is a must read for all history buffs and those into Muslim-Christian relations and chivalry.

Max Joseph Ellul was born in Malta, in December 1970. He specialised in marketing and business administration and is the CEO of an international management consultancy group.


An avid bookworm and researcher, Max had a number of his works and writings published in the UK and the US.


Max is also a Fellow and Companion of numerous professional institutions, including the Institute of Sales and Marketing Management and is a Fellow of the Royal Society of Arts.


Max entered the Hospitaller Order of Saint Lazarus in the twelfth investiture of postulants held by the Grand Priory of England at the Priory Church of Saint Bartholomew the Great in the City of London. Later, he reluctantly accepted the then Grand Chancellor’s suggestion of organising a Mediterranean Grand Priory.


In 2008, Max Joseph Ellul was nominated as the Grand Chancellor of the United Grand Priories of the Hospitaller Order of Saint Lazarus of Jerusalem, which includes the Grand Priories in 26 different, worldwide jurisdictions. He holds the rank of Knight Grand Cross of Grace of the Order and was elected as Grand Commander of Merit in the Companionate of Merit. In February 2006, the Knights in Council presented him with the coveted Gold Oak Leaf of Merit for outstanding services to the Order.


In 2004, Max published a short history of the Order of Saint Lazarus entitled ‘The Green Eight Pointed Cross’.


Max is married to Dame Commander Christabel nee Saliba DCLJ and has a son, Myron Max Milcom, and a daughter, Malaika.