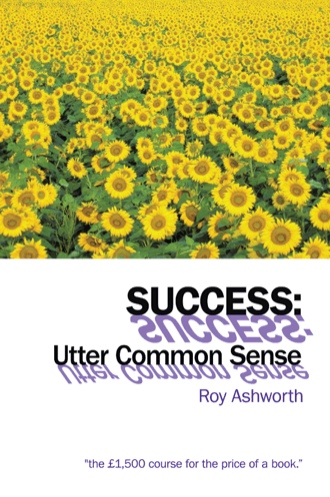 Success: Utter Common Sense The title of this book has two distinct meanings: Success – meaning to achieve your purpose; and, Success – a mnemonic to aid you in recalling the process proposed. Achieving your purpose can mean realising something you have been striving for: that I would consider a success. On the other hand, it can also mean selling ideas, goods and services to a third party – your boss, customer or a client. In other words, securing a decision; I would consider that to be a success, too. Utter also has two meanings: Utter - as in absolute or perfect and informed - common sense; that is, thinking rationally to your highest ability; and, Utter – meaning: to express - common sense; that is, telling a Story (writing, expressing, delivering or presenting) and being persuasive. The purpose of this book relates to both sets of double meanings, and aims to explain how you can successfully and consistently demonstrate absolute common sense – thinking - and, as a consequence, telling – delivering: to act, speak or write - with common sense. So, what exactly does Common Sense Mean? Consider: to be described as “having common sense” is a compliment, isn’t it? Do the words, “practical”, “level-headed”, “down-to-earth”, “realistic”, “clear-thinking”, “thoughtful”, spring to mind? Conversely, one often hears it said of a person, that he or she “lacks common sense”. We use it to describe people who are (too frequently) knowledgeable but impractical, unwise, foolish, unthinking, thoughtless; with a tendency to over-complicate; unrealistic, not in the real world. Most tellingly, it is often used for obviously well-educated people who are hopeless at getting things done. It is not a compliment, is it? In short, a person who has no common sense is unable to think and, therefore, act sensibly.[i] Clearly, in common parlance, we use “common sense” as a measure of a person’s ability to think before acting. “Common sense”, “commonsense”, “commonsensical” or “he or she has a lot of common sense” are all ways of describing clear, straightforward, practical, logical thinking. In effect, the phrase “common sense” is the lay person’s measure of “thinking” as opposed to intelligence or learning. “Common sense is the genius of humanity.” Johann Wolfgang von Goethe[ii] As already mentioned, we have all encountered or heard of obviously intelligent, highly educated people who lack common sense. This is not to suggest that all highly intelligent people are without common sense! But the fact that we can use the two terms together – highly intelligent but lacking common sense - confirms that we distinguish between intelligence and how we use our intelligence, which means thinking. Common sense, then, means thinking. Intelligence. n.

The aim of this book is to encourage clear argument and successful communication. Who is this book for? It is for anyone who wishes to marshal their thoughts, think logically and communicate clearly and persuasively. Used properly, the process described in this book is the basis for personal success: in your personal life or in your career. It will help you to consistently develop your ideas into watertight plans, reports or presentations. Use the concepts explained in here to persuade bosses and clients: to sell products or services and achieve promotion; to write reports, complaints about bad service, essays or letters; to make appeals for help, defend rights, win arguments and legal disputes; to influence colleagues, friends, even your spouse!

Roy Ashworth is a highly experienced businessman who co-founded an international consultancy. After graduation form the University of Edinburgh, he qualified as a professional accountant and pursued a career in industry, working in a variety of leading international companies, including Telecoms (ITT) medical electronics (EMI Medical) and process plant consultants (H&G International). Although semi-retired, he is still active an active business consultant, moving between homes in England, France and Malaysia.