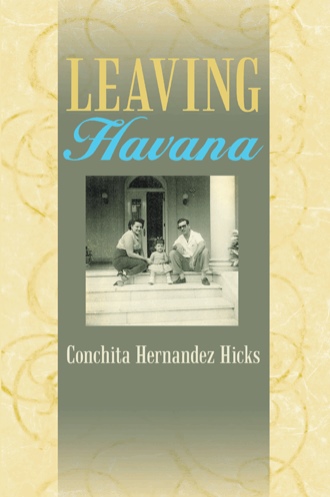 At the airport, people leaving Cuba were confined to a room almost entirely surrounded by glass. It was nicknamed the “fish bowl.” Castro’s supporters stood outside the glass shouting vulgarities and making obscene and insulting gestures. The revolutionaries inside the room did the same thing.

There were tables set up around the fish bowl where the checked luggage was searched and then loaded on the plane. My grandparents and my parents took our bags to be searched. The search was done without any consideration to the condition in which the militants searching left the contents of the suitcases. It was as if they were intentionally trying to leave them in a mess.

The men searching bags took my father’s watch and my mother’s earrings and bracelet. My parents had tried to hide a couple of wedding photos so they would have them in the United States. The men found them, ripped them, and trashed them without remorse. My mother had also hidden a small photo of her doctorate degree in her underclothes. This they did not find.

There was a room adjacent to the fish bowl where they sometimes did strip searches if they suspected someone had an item hidden on their person. Even children were sometimes subjected to these strip searches. We were at least lucky to avoid that.

About two hours before we were to depart, two men dressed in military garb and carrying machine guns approached us looking for José Hernández. At gunpoint, they instructed my father to go with them. My mother followed them even though she wasn’t supposed to do so.

The men took my father to another room and one of the men stood at the door with his machine gun across the doorway. At this moment my mother had no fear. She grabbed the barrel of the man’s machine gun, pushed it out of her way, and went into the room. She demanded to know why they were holding my father.

The uniformed men told my parents that my father was being held because he did not turn in all his pistols to the government as he was supposed to have done. They then informed my mother that if she did not leave immediately, she would also be arrested.

At that point my dad told my mom that she needed to go. He made her promise that even if he was not back when the time came to leave she would get on that plane with the three of us and get out of Cuba. My mother at first refused, and then finally agreed with tears in her eyes.


In 1961 there were no jetways to board airplanes. A set of metal steps was rolled up to the door of the plane and the steps were climbed to board. At the bottom of the steps a table was placed. Behind that table stood two of Castro’s armed and uniformed men to inspect the items that passengers carried on board.

The time came for us to board the plane. My dad was not back. My mother and my grandparents walked out on the tarmac with my two sisters and me. When we got to the bottom of the steps, my mother and grandparents placed purses and other carry-on items on the table. I had a baby doll and my little wooden train case which also had to be handed over for searching.

I was not happy about giving the men my doll! It did not take them long to return it, probably to keep from listening to me. When my little train case was opened, on the top tray, in plain sight, were the diamond earrings that I had sneaked back to get. My mother later told me that she inwardly gasped when she saw them. However, the man assumed they were costume because they were so out in the open, commented on my pretty earrings, and let them go through. I still have both the train case and the earrings.

After the search was complete, the six of us climbed the steps to board the plane and to begin a new life. I did not understand at the time why my mother, my grandmother, and my grandfather each paused at the top of the steps and looked around, taking in a final breath, before going inside the plane. I understand it now.


I cannot imagine the heartbreak that my mother was feeling as the plane took off. She was not only leaving her friends, her home, and her life behind – she was now also leaving my father.

My dad said that when they were taking him back to Havana for questioning he saw the plane that we were in take off and then fly over him. He said that at that moment, his world collapsed.

Cuba was a playground for the wealthy in the 1950s. It was a place to bask in the sun during the day, and enjoy many fine nightclubs, restaurants, theaters, and casinos after the sun went down. Many wealthy Americans traveled to Cuba for both business and pleasure. In January of 1959, everything changed. I was a little girl in Cuba at that time. I was living a life of luxury with practically anything that my little heart desired. My family had a chauffeur and homes in the city, in the country, and at the beach. I had my own nanny. I had parents and grandparents that loved me and lived close by so that I could see them almost every day. I was truly living a fairy-tale existence. In what seemed like the blink of an eye, my world came crashing down around me. Fidel Castro took over Cuba and made devastating changes to the country - and to the lives of those who lived there. The fairy tale quickly came to an end. Many difficult decisions had to be made by my parents and by many others. The world that we knew no longer existed. We had to leave loved ones and property behind. We had to move forward to a new life in a different country, with different customs, and a different language - and there was no turning back.

Conchita Hernandez Hicks was born in Havana, Cuba. She and her family lost everything and came to the United States in search of freedom after Fidel Castro brought socialism and communism to Cuba. Although she was only a little girl when she lived there, she has vivid memories of her life in Cuba.

After living in Miami for a year, Conchita and her family moved to Montevallo, Alabama where her mother joined the faculty at Alabama College and her father found an accounting job. Most of her growing-up years were spent in Montevallo.

Today, Conchita lives in Alabaster, Alabama with her husband, Barry. She teaches Spanish at Pelham High School in Pelham, Alabama. She enjoys traveling with her husband whenever time permits.

Conchita is proud to be mother to two fine sons, Alan and Brad, and grandmother to four wonderful grandchildren, Daniel, Abbie, Carson, and Jason.