The Legends Of Azariah 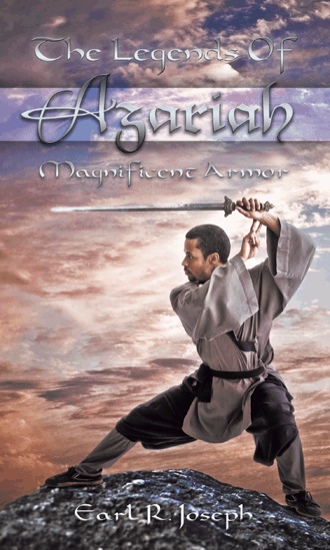 It was after midnight when sleep became his companion, in the stillness of the jungle with only the prevailing noise of the insects. After an hour or so as sleep held him strongly, the area surrounding his structure became extremely quiet. A couple of minutes within the silence, he was awaken by a loud gruesome heavy roaring. Then something came crashing through the wall, grabbing him by the leg and dragging him off the bed. As he screamed and kicked, the ugly beast released his foot and came to his face roaring and drooling, and using it's powerful paw to scratch him on his chest, trying to gain control. In his fight to stay alive, he kicked and cuffed the beast, while pushing himself backwards. The beast snapped and growled furiously. He placed his feet on the upper jaw of the beast and pushed himself backward and took hold of the cutlass as he quickly stood. The beast forcefully and swiftly leaped at him, and quickly he stepped to the side leaving the beast to crash into the corner post bringing the structure down. It was a mad dash for Tamar as the beast roared heavily in anger shaking off the remains of the structure. Tamar moved quickly, sprinting to the nearest tree he could find. He jumped and held on to the lowest branch, the beast saw him hanging and gave chase, he leaped in an effort to rip him off the branch. Tamar, in pain, with his bleeding wounds pulled himself up causing the beast to barely miss him. He used the momentum and climbed high into the tree, holding on tightly and breathlessly. He watched as the beast jumped, growled and roared in an angry rage ripping the bark off the tree and shaking it between his teeth in a mad tantrum. After a few minutes the beast was gone, giving up on what would have been a large meal, leaving Tamar with wounds on his arms, chest and one of his feet. Tamar was now tired, in pain, without much sleep, and had not plan on coming down soon. He held tightly to the branches and realized in his state he would most likely drift away and fall to the ground. Slowly and painfully he pulled the vines that hung around him, made himself comfortable between the joining of tree branches and strapped his body to the branches.

Summary In an eagerness to fashion his future in his own manner the young soldier Tamar Kedemah convinces his friends to embark upon an adventure. The three men on a quest for adventure blatantly disregard the principle of the Azarian kingdom, which causes the unfolding of a series of events and delivers them to places they never thought they would be. Inadvertently their quest affects the lives of many whom they knew and many whom they had not known.

The author Earl R. Joseph has an unbridled and colorful imagination, combine with history and myth he creates interesting and adventures stories. He has the ability to add a few twist to his compelling stories which would keep the reader wanting more