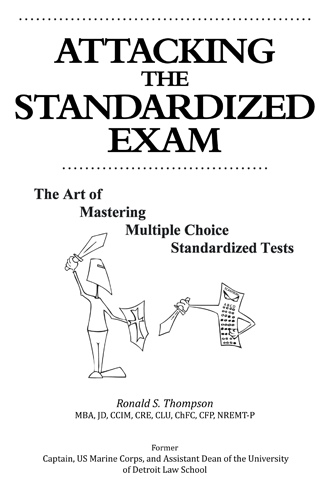 The purpose and intent of this book is to provide the reader with all of the tools and weapons necessary to attack, conquer and ultimately master multiple choice exams. Through reading this book, you will achieve the following skills: 1. Developing the mental toughness to achieve total test taking confidence; 2. Eliminating fear, stress, test anxiety, and other psychological barriers to test success; 3. Achieving the discipline and decisiveness necessary to prepare for, attack and conquer the exam; 4. Building the “test mastering body” through proper exercise, diet and sleeping habit; 5. Learning focused memorization techniques designed to limit study time and achieve superior results; 6. Understanding the test preparation methodologies that actually work and how to select the best one for you, including study courses, sample tests and flash cards; 7. Building a comprehensive and stress free study schedule for guaranteed success; 8. Learning how to focus on what you actually need to know to pass the exam and how to best prepare to retrieve that information at test time; 9. Understanding why the last 24 hours before the exam are so critical, and learning a step by step program of exactly how to use that time to maximize your test results; 10. Knowing what to eat before the exam, what to wear and bring to the exam, and the critical steps to accomplish upon arrival at the test site; 11. Understanding how to attack questions, and the correct system to locate and select the right answer every time, all while properly managing your time to ensure no questions go unanswered; 12. Developing the skills required to win the ”game” of test taking, including the rules of logic and statistics which will lead you to the right answer and show you how, when necessary, to guess logically and intelligently, significantly increasing your odds of success. Over the years, I have helped many individuals study for and pass multiple choice examinations and my hope is that with this book, I can help even more.

I have spent the better part of the last 53 years taking well over a thousand multiple choice tests. As a teenager, I struggled through high school. Armed with an average IQ and some fairly significant learning disabilities, I barely graduating with a 1.4 grade point average. However, I was smart enough to figure out early on that much of academics, and that achieving success in academics, had far more to do with the ability to master multiple choice tests than raw intellect. From there I began a 35 year study on the art and science of passing, mastering and scoring high on multiple choice tests. Despite a very substandard high school GPA, I scored high enough on the SAT and the ACT to be accepted to the University of Michigan, one of the top academic institutions in the Country. Upon graduation from college, I accepted a commission as an officer in the United States Marine Corps. As a Marine Officer, I completed dozens of military and civilian schools, including a Masters Degree from Boston University, and a Juris Doctor Degree from the University of Detroit School of Law. In fact, I earned a full ride military scholarship to law school based primarily on the fact I scored so highly on the Law School Aptitude Test (98th percentile). Upon completion of law school, I passed the Michigan Bar exam on the first attempt, scoring 149 points on the multistate (the multiple choice portion of the exam), which was one question away from automatic passage (at 150 they examiners do not need to grade the essay portion). I have also taken and applied many of the Marine Corps concepts of discipline and mental toughness to the art of preparing for, taking, and passing multiple choice tests. Resigning my commission and leaving the Marine Corps in 1990, I continued both my education as well as honing my test taking skills. I currently hold 12 professional licenses and 5 professional designations, which required me to pass several comprehensive and difficult multiple choice examinations. I have also attended dozens of professional test preparation courses. From those courses I have “cherry picked” all of the valuable lessons and test taking tips and have included those in this book. One of the professional licenses I hold is a paramedic license. As a paramedic I have gained a much greater understanding of the anatomy and physiology of test taking. Test taking is all about the central nervous system, which of course includes the brain. However, as I explain in this book, it is clear that the sympathetic and parasympathetic nervous systems have as much to do with passing and failing multiple choice tests as does the brain. Accordingly, I have also applied many of those principals in this book.