The Real Truth About Men, Marriage and Infidelity (The Three Minute Factor) 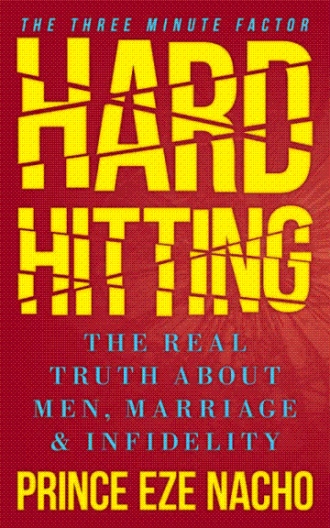 The pursuit of happiness is endless and timeless. There is a well known belief that there are three ingredients to happiness, namely:  “something to do”, “something to love” and “something to hope for”. In trying to find love and sustain an ingredient of happiness – marriage and co-habitation are born. Love and these relationships are intertwined in this regard. They are supposed to be inseparable but to assume that this is the case is to be naive, albeit ignorant.

Prince Eze in his book “Hard Hitting!” has tried to highlight some of the problems in these relationships and infidelity ‘accounts for a large number of the unhappiness that plagues marriage and co-habitation. Infidelity causes untold sufferings to the couples and in many cases extending to others: children, in-laws, parents, friends and others who have become emotionally involved because of the expectations that follow or assumed to be in these relationships.

“Infidelity is a violation of the mutually agreed-upon rules or boundaries of an intimate relationship, which constitutes a significant to extreme breach, or outright default, on the implicit good faith contract of a relationship, or a betrayal of core shared values with which the integrity and nature of the relationship is defined. In common use, it describes an act of unfaithfulness to one’s husband, wife, or lover, whether sexual or non-sexual in nature.

There are two areas in a close relationship where infidelity mostly occurs: physical intimacy and emotional intimacy. Infidelity is not just about sex outside the relationship, but about trust, betrayal, lying and disloyalty. What makes infidelity so painful is the fact that it involves someone deliberately using deception to violate established expectations within a relationship.”

“Hard Hitting!” by Prince Ihenacho has described infidelity and has also tried to highlight the attitude of the society to infidelity. I am sure that his book is about informing and educating rather than justifying or condoning the “act of infidelity” – no matter whosoever, is involved.

This book seeks to bring to bear the fact that, “It takes two to tango”. The problems therefore arising from infidelity should be placed equally on both individuals caught in the act.

The “kiss and tell phenomenon” – the individual that is doing the telling is as guilty as the other party that is being talked about. Both persons involved in infidelity should be equally shamed or blamed whether single, married or co-habiting, female or male.

Prince Eze has been very pragmatic in his approach to the subject of infidelity.

I wonder if anyone could be any more articulate or take ‘the bull by the horns’ as he has clearly done in his book “Hard Hitting!”.

I would recommend this book to all; whether married or single, female or male, divorced or separated, young or old. I believe that we all have one or two things to learn from this wonderful and audacious book by Prince Eze Ihenacho.

‘Hard Hitting’ provides the most comprehensive and compelling insight into infidelity in general. It explores all the various strands of emotion and other factors that lead to infidelity. For example; the author writes ‘naturally, sex is a pleasurable act for men from day one, but a painful act for women on day one. However, just like everything in life there are always some exceptions to the rule’.

The book provides couples and couples to be with a unique insight into what should be done to reduce infidelity. This book is essential because the cost of separation and divorce to couples, their children, extended families etc, is incalculable. The book suggests that it would amount to ‘courting disaster’ if couple’s sexual compatibility is not given the priority it deserves (either by going it the religious way or otherwise) during courtship, as infidelity accounts for a lot of separations in society today, and it goes further to stress that it is not a coincidence to see that most young people in Mental Health Institutions and prisons come from dysfunctional families, some as a result of infidelity leading to divorce, though sometimes the parting words are 'there is no third party involved' but how definite is this? The book also contains a powerful/moving story ‘tribute to an awesome father’ illustrating the Author’s father impact on his life, though his father died when he was 14. His father was not only a teacher but a wrestler, artist, musician etc, who translated his teachings into music to aid his student’s understanding. Most gripping of all is what his father suffered and endured before being allowed to marry his mother. The tribute would be hugely beneficial to parents of all ages and their children. This might prove to be the ‘best’ book you have ever read.

Prince Eze. Ihenacho occupies a unique position, being that he comes from a background which includes having a grandfather (HRH Eze G.O. Ihenacho) late of Ogwa in Imo State, Nigerian who had 32 wives, working as an Approved Mental Health Professional with Social Work background and as a marriage counsellor which put him in the best possible position to deal with the topic of this book. He also carried out a survey in order to do this book and its contents justice. His wealth of experience and knowledge on issues relating to life in general is second to none.