Sleep for Success! Everything You Must Know About Sleep but Are too Tired to Ask

by Maas and Robbins 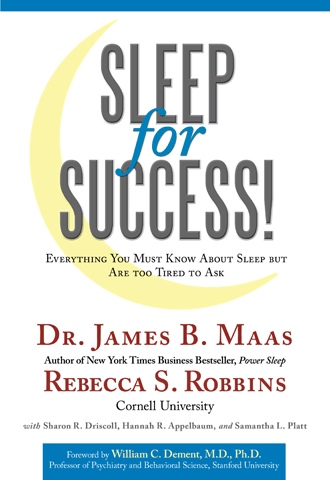 Given the present, stress-inducing state of the economy and the world, there has never been a better time to provide a wake-up call on how to relax, get centered, get 8 hours of sleep and be happier and more successful. Recent research has shown us that when we get enough sleep, we are able to accomplish more in less time and with less stress and greater health. We don’t need a 26-hour day. With more efficient and effective sleep habits, in our book, 24 hours is more than adequate.

Our proposition is simple and compelling. Do you want to be healthier, more productive, energetic, creative, organized, efficient, and constantly expanding your potential?  Do you want to be less stressed, happier, have a better relationship with yourself and others, and a deeper sense of well-being?  What if you could take a few small steps every day that would enable you to eventually achieve all these things?

Sleep for Success!, a convincing, psychological approach to changing attitudes and behaviors, is written for anyone who wants to get a great night’s sleep, feel wide-awake and be a peak performer all day. It pertains to executives, students, parents, athletes, children and senior citizens.  If you’re human, chances are that you are at least somewhat sleep deprived.

Sleep for Success! can change your life – literally overnight.

Dr. James B. Maas received his B.A. from Williams College and his M.A. and Ph.D. from Cornell. He is Stephen H. Weiss Presidential Fellow, professor and past chairman of psychology at Cornell University and professor at the Weill Cornell Medical College-Qatar. Dr. Maas has been a Fulbright Senior Professor to Sweden and a visiting professor at Stanford University.

Dr. Maas is the recipient of the American Psychological Association's Distinguished Teaching Award for being the nation’s outstanding educator in psychology. He holds the world’s record for having taught more than 65,000 university students in his 44-year career. Dr. William C. Dement, the father of modern day sleep research, refers to Dr. Maas as “the world’s first and foremost sleep educator.”

Rebecca Scott Robbins, B.S. Cornell University, served as instructor at the Weill Cornell Medical College-Qatar, is a PhD candidate in communications at Cornell University, and is co-founder of Sleep for Success. Rebecca has presented dynamic speeches on sleep to large corporate and educational audiences, and has taken a leadership role in effecting change in such prestigious schools as the Deerfield Academy in Massachusetts, the Iolani School in Hawaii and the Hong Kong International School.