A single True Story based on the Experiences of many Afghans 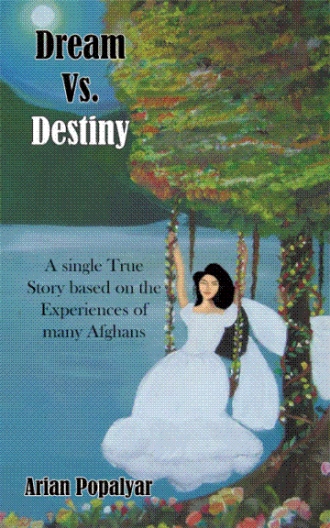 ‘Run, Ayesha! Run!’ said Suzy, but Ayesha said “Suzy relax ¹yaar (¹buddy)”. “Ok let’s go this way. Everyone is in the Oxford auditorium. Can you hear the sound of clapping, Ayesha?” Suzy said. “Of-course buddy; this is the day I fulfil my dream - where we will be crowned for our four year’s of hard work”, sais Ayesha. At last they both reached the hall where the announcer was calling the name of Ayesha for the third time: “Ms. Ayesha Popal, please come to the stage to receive your certificate”. She moved toward the stage with great confidence. Her heart was full of joy and her eyes were sparkling with pleasure. She receives her certificate and the hall thunders with the sound of clapping. Suddenly she hears someone calling her name –‘Ayesha! Ayesha!’ - Her brother Imran beating her on the back - ‘Wake up you silly girl! Wake up!’ She opened her eyes and saw Imran in front of her and said, ‘You stupid boy! Why do you always do this to me? Ooh I was so happy; holding my certificate’. She hit her brother with the prospectus of Oxford University, which she had been clinging to in her sleep. Imran says: “Stop! Silly girl, you and your dreams; since uncle sent you this prospectus you can’t see anything else. Don’t you know the condition of state is getting worse every single day; so stop dreaming ok? Anyway, you know uncle; he just send this to fool you; he is not going to give you any other help. You know that he is very practical and loves his own money so you’d better stop day dreaming”. Ayesha says “Whatever Imran, I trust myself and I know that one day I will achieve my goal, I will show you, and people like you that anything is possible if you have courage”. Imran says, “Ok, we will see. But for now go to the kitchen - Mom needs your help”. Ayesha hurries to the kitchen and says: “Salaam Maa (Mother), what are you cooking?” Her mother replies “¹Qabile Palaw” (¹famous Afghani dish). Ayesha says “But don’t you think it’s too early for making dinner? It’s only 5 o’ clock.” Her mother says, “My dear, your brother said that he will be home from work soon, and once he is home you know how hungry he will feel. Besides this the fighting may start again today and then things will get even worse, so let’s stop talking and start working, come on”. Ayesha says “Ok Maa”. Eventually all the food is prepared. Ayesha says “Maa its 6:30pm where is ²Padar (²Dad) and brother?” Mother says, “I’m worried too my dear. After the fighting it is only their second day of being back at work. I’m so worried, from the time they leave in the morning until the time they come back I feel like I am on fire.” Ayesha says, “I know Maa,’ suddenly there is a knock on the door. Ayesha says ‘It’s them –wow- super timing.’ She opens the door and say, “Salaam Padar Jan (greetings dear father), how are you?” Father says “I am fine baby, how are you? Is your brother back home?” She says “Padar Jan, relax, come in; everyone is fine, but brother is not back yet.” She closes the door and they hear the sound of firing. Father shouts “Oh no! I guess the fighting has started again. All Mighty Allah please help us! Everybody, heads down and move towards the safe location in the house”. Ayesha and her family used to live in Mecroyan, which is a very famous residential part of Kabul city where people lived in apartments. When they heard the sound of bullets the people from the second, third, fourth and fifth floors rushed down to take shelter in the basement. Those basements were designed to get rid of water from snow. Now the basements were being used as human shelter. The rest of Ayesha’s neighbors came downstairs panicking and making a huge amount of noise. But Aeyesha’s family didn’t go to the basement because they lived on the first floor. After a brief pause of about three minutes the sound of bullets continued. The clock struck 12:00, but still there was no news of Ali; still he hadn’t come back, everyone was very worried. Finally, the clock struck 1:30am and the sound of firing stopped. Everybody came out of their hiding places and stood before the door, staring at the door and praying for Ali’s safe arrival. At 2:00am someone knocked at the door. Papa called “Who’s there?” There was no answer but instead, a faster knock. Papa finally gathered his courage and opened the door and was surprised to see Shah (Ayesha’s uncle). Shah was clearly frightened and his forehead was sweating, he said “Salaam everyone. Brother, I have decided to leave Afghanistan. Me and my friends have arranged a truck for us to leave for Pakistan tomorrow, I came here to tell you to go with us. Pack what you need quickly and come with us”. Papa replied, “No. Never. No way! How can you think like this? I’m not going with you and neither is my family. Come on Shah, this is our country, our motherland, how can we leave like this? I believe things will return to normal”. Uncle says “¹Lala (¹Big brother in respect) don’t believe nonsense. The condition of the state is very bad and it gets worse day by day”. But papa denies uncle gets increasingly angry. To enforce his words he said, heatedly, ‘Enough! No more discussion! The state condition is critical and we are leaving.” Papa was quiet but Uncle Shah’s mood was changing. He became very nervous but then he became relaxed appealed: “Brother listen, I respect you and your patriotism but this is the matter of life or death of our family and for that we can make no compromise.

Dream Vs destiny is the story of an Afghan girl who dreams to study abroad and come back to serve her nation but because of war in Afghanistan she flees to Pakistan the story goes through all the incidents her family face during Afghan war and during migration and then what happens with them in Pakistan after migration, and how she fall in love, the legend explains her struggle for her dreams and the huddles of destiny and then how she finally reach to Canada. The writer has used poetic way of telling story the cream of story is the sprinkle of comedy over various incidents. The dream vs. destiny has sadness, happiness, ups and downs it’s like life because its about life and any one can relate their self to it. The beauty of Dream Vs destiny is because it’s based on the true life incidents.

Arian Popalyar is young energetic Afghan girl whose family faced different problems in afghan war they fled to Pakistan where she grew up watching many afghan families fighting the battle of life in Afghanistan and then as refugee. Being a sensitive person she use to tell stories in school, her friends loved her stories and asked her to write but she ignored saying life is long to do that but the earth quake in Pakistan made her realize that life is too short so after finishing the school she start writing a story then leave it in mid and after the gape of seven months she completed the novel, she is the only child of her parents she is studying software engineering in London Metropolitan University, she is a brave girl who love her country the trouble of her life has made her tough some of her saying are below: Hard work without vision is fruit less. Mostly discouragement gives you more strength to do your best in order to prove yourself; which makes you successful. Things that you worry about soon or later they will come to your life but this time will never come back so enjoy it fully.