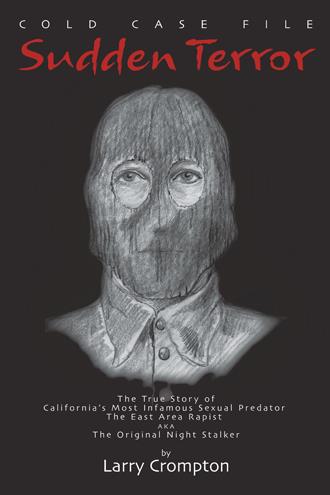 Out of that darkness and into the moon's glow emerged a solitary shadow, which slowly took the shape of a young man. No sound disturbed the stillness as he stepped from one railroad tie to the next, moving closer and closer to the quiet neighborhood and the sleeping woman.

He left the railroad tracks and weaved through the backyards of the neighborhood. Not pausing, he seemed to know the area, drawing closer and closer to Carey, pausing once, briefly, at the backyard fence. Quickly and quietly he entered the yard.

He unzipped the bag he carried with him, removed a cloth mask, and slipped it over his head. A knife, a pair of gloves, and two pieces of short rope were placed on the ground near the bag.

The masked man stood in the shadow of the fence and moved a plastic birdbath under the telephone line and climbed onto the bowl. The blade of his knife flashed in the moonlight as he tried to cut through the line. Unsuccessful, he jumped to the ground and moved toward the back door. Again, the knife flashed as he chipped away the wood from the door lock, then silently slipped into the house. He paused at the doorway, then crept toward the sleeping woman's room.

The hang-up phone calls over the past two weeks were not on Carey's mind. After tonight they would summon a fear that would remain with her the rest of her life, causing her flesh to crawl at the sound of a ringing phone.

The half-naked man silently moved through the house then stood in the doorway of Carey's room, staring at her sleeping figure through the eye holes of his mask.

A tapping sound from the doorway penetrated Carey's dreams and brought her out of a sound sleep. Her bedroom light flashed on, bringing her closer to reality.

She stirred, opened her eyes and looked toward the sound…tap, tap, tap.

Fear entered her dulled senses as she looked into the eyes of the masked intruder. She could see the knife in his gloved hand as he continued the rhythmic tapping against the doorjamb. His black T-shirt and erect penis drew her attention. She watched in horror as her eyes focused on his penis; she was unable to form thoughts as he leaped at her bed.

Instinctively she pulled the covers over her head to protect herself from an awful nightmare. But the nightmare didn't leave and she felt the weight of his body straddling her legs. The blankets were torn from her face and she stared into the eyes peering at her through the mask and realized this was not a child's dream; it was a living nightmare. The point of the knife pressed against her left temple and blood flowed from the wound and soaked her pillow.

Her ears were ringing as fear pulsated through her body.

This book is based on the actual case of the East Area Rapist, later also known as the Original Night Stalker, a masked man who terrorized California communities for ten years; 1976 through 1986, and possibly to this day.

Because I was not involved in the initial rape investigations, they are written from hundreds of reports, notes, memos, newspaper clippings, conversations and interviews with those who were involved.

The crimes are factual. The crimes are real. While all characters and events have direct counterparts in the telling of the story, I have created some dialogue in the interest of readability. The cops in the initial rapes are not factual, their actions are. Their names and descriptions are completely fictitious. The names of the victims, witnesses and suspects are fictitious; the terror, the dialogue during the crimes, and the investigations are real.

The cops involved in the cases after I was involved are real, their names and dialogue is factual, the investigations are real.

The pain and terror may have diminished in the minds of the victims, I hope that the pain does not return. My intent is to tell the story without endangering the privacy or the dignity of the victims. They have suffered enough.

Larry Crompton was born in St. Stephen, New Brunswick, Canada, graduating from St. Stephen High School in 1957. He served three years in the Royal Canadian Army Reserve, Carleton and York regiment while attending school and five years active service in the Royal Canadian Navy, honorably discharging in 1962 with the rank of Leading Seaman as part of the aircrew flying anti-submarine airplanes. Immediately after leaving the navy, Mr. Crompton, his wife and their infant daughter moved to California. In 1968 they became American citizens. Mr. Crompton joined the Contra Costa County Sheriff's Department in 1971. As a deputy he worked Detention, Patrol, Vice, and Narcotics Divisions and crime scene investigator for the Crime Laboratory. He was promoted to sergeant in 1978 and worked the Rapist Task Force out of the Investigation Division, drill instructor with the Los Medanos Police Academy, Patrol, Internal Affairs and coordinator of the Reserve Program. He was promoted to Lieutenant in 1986 and worked as the Commander of the East County Sheriff's substation, Communications Division, Detention and the Bureau Commander of the Custody Alternative Bureau. While working for the Sheriff's Department he received his teaching credentials from U.C. Berkeley and taught criminal law at the Los Medanos Police Academy for thirteen years.