Key Holder of the Realms Book 1 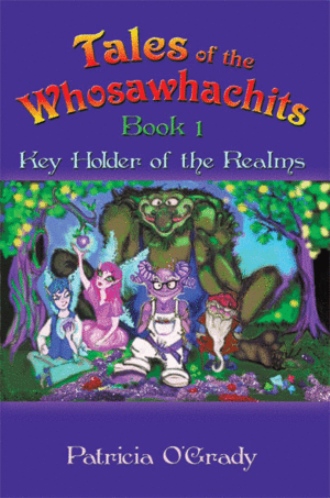 Kyle had accidentally entered the land of the whosawhachit's. He didn't know that yet, but soon it was going to change him, possibly forever. There was no turning back, no chance to open a different door and no visible way out, he was locked in their realm.

Kyle looked around, it was a very strange place indeed. The trees were colors of deep purple; the grass a shade of light lilac, even the sky had a lavender hue. Well, that certainly explained the color of the door he thought, it was purple land. He wondered was this the right place, and hoped that he would find Annastarlis and Nerby.

Kyle walked down a path of deep purple dirt, ahead he could see a pool of deep purplish water, everything was so odd, so strange in this place, and it was so quiet, almost too quiet. Not a sound could be heard, except the sound of his sneakers hitting the dirt, and his own heart beating. The dirt wasn't just plain looking; it had all swirled patterns to it, like someone had carefully sketched the designs out using a tool or a stick. He turned around to glance at his tracks in the dirt behind him, as he took each step; he ruined the swirled pattern design. He hoped that he wouldn't get into trouble for doing that, it really wasn't his fault. A path is made to walk on....isn't it?

He then noticed that almost everything had some sort of pattern to it. The bushes were all planted in patterns; same with the trees, everything had a distinct shape to it, like they were masters of the hedge trimmers.

Kyle suddenly heard rustling sounds coming from the purple bushes down the path. They were strange looking bushes; dark purple leaves with light lilac daisy flowers on them, the flowers were shiny almost waxy looking. Kyle bent down to touch one of them, because he thought for a minute that they could even be plastic, and he jumped back the minute the flower moved, as if it was a living creature. Some of the flowering bushes had large pods handing on them.

This place was getting weirder by the minute, but still Kyle was determined to continue further down the path, after all, what choice did he really have now? The door had disappeared so he didn't know how to leave and go back home even if he wanted to, and eventually he would find out, that he really wanted to.

Within seconds Kyle found himself surrounded by strange creatures, and knew instantly that they must be the Whosawhachits. There had to be forty of them, they managed to leap or pop right out of the flowers and onto the path instantly. They were silent; they circled around him, just staring at him, yet at the same time they weren't threatening, in fact they almost seemed to be smiling.

Kyle couldn't believe what he was seeing. Their skin was a light shade of lilac; they had soft baby blue eyes, with huge ram like horns on their heads that were striped in shades of purple. All of them wore the same kind of black rimmed eyeglasses. They stood about 3 feet in height, and just walked around and around him. Kyle was scared to death and he knew they sensed his fear. 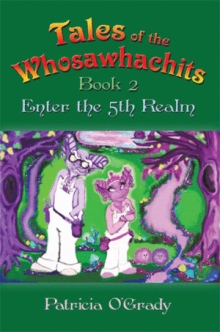 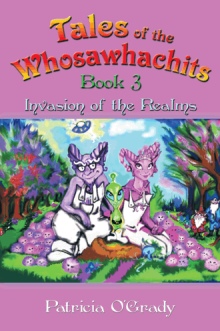 Tales of the Whosawhachits
Patricia O'Grady
$16.99

An enchanting tale revolves around a young boy Kyle Janis. His journey begins when he stumbles upon the secret entrance way to the underworld realms of fairies, trolls, gnomes, and mysterious whosawhachits. He is held prisoner by the impish purple whosawhachits; and the realms must go to war to free him. He finds himself caught in their battle for the title of key holder of the realms and possession of the magical diamond key. This delightful story and its charming characters is an entertaining adventure which will leave you wanting more. The boy discovers that the underworld realms are responsible for many unexplained mysteries. Kyle is finally rescued by the gnomes and returned home, only to find that no one believes the missing boys tales of secret lands and magical creatures. This book and its endearing characters will capture the hearts of both boys and girls, and has received rave reviews. This is book one of the series.