Barksdale Chronicles in America, Vol I

The Stories of John Hickerson and Hickerson Barksdale 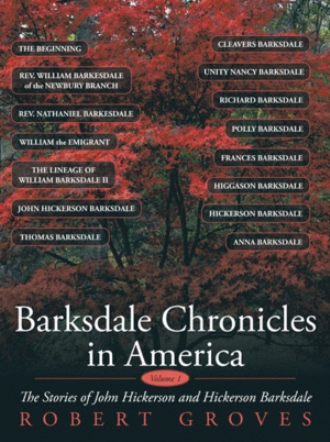 William II (1695-1771), became the first Barksdale ancestor to be born, live and die in the New World. He married Sarah Collier and together they had seven children: John Hickerson, Hickerson, Collier, Thomas Henry, William, Daniel, and Nathaniel. It is from these seven contemporary Barksdale men that the family grew. The census records, as well as the records of the Virginia State Library, that have became available since Capt. Barksdale’s publication in 1940 have lead to the discovery of so much more from this point. In the 1940 publication, none of the dates of birth were known for any of their children and sparse information was available on their spouses and children. Modern day research now leads to the conclusion that John Hickerson was “John” in the 1940 book and that the “Thomas” mentioned briefly at the end of section III is actually part of the information belonging to “Henry,” thus Thomas Henry. If any information is thought suspect from the 1940 book it would be that a separate “Hickerson” Barksdale existed, as of the seven contemporaries, his is the only will that has not been located. All of these gentlemen were interacting in the same area of Virginia at the same time. They were purchasing and selling land, bringing court actions, witnessing each other’s deeds, standing as guarantors on bonds, and acting as executors and guardians for those deceased. But as Barksdale pointed out in 1940, in genealogy, the further in years one goes back for information, the more apt mistakes are to follow as records become lost, rewritten and translated differently from the original. There is no absolute certainty beyond three to four generations removed unless we discipline ourselves to better record keeping. That no one, knowingly, has published additional writings since the 1940 history is a telltale sign in itself of our indolence with preserving data.

Barksdale Chronicles in America, Volume I is the first published book by Maj Robert A. Groves. His research into his maternal ancestors began at the millennium due, in large part, to the colorful family stories he recalled his mother and her siblings sharing during his childhood. Family chronicles define and preserve the contributions of ancestors to their families and communities. Through a study of our roots, we gain an appreciation of what helped shape us as individuals and citizens. This edition captures but a small part of the Barksdale family as it starts out in the New World. As followed through the lineage of John Hickerson Barksdale, early ancestors began forging a life for themselves in Virginia, South Carolina, Alabama, Mississippi, Texas and Arkansas. They courageously served their country in the Revolutionary War, the War of 1812, and the Civil War. Some dipped their toes into the political waters of our country and served their communities, states and nation as elected officials. Using their creativeness, they turned resources available to them into entrepreneurial opportunities in agriculture, merchandising, and manufacturing. Some heard a higher calling and faced the moral issues of the time from rural pulpits. Indeed, the early Barksdale ancestors played a vital role in shaping the communities where they settled and the environment into which following generations were born.

Rob was born and reared in Dalton, Georgia. After finishing high school, he attended Dalton State College and majored in nursing. Following 13 years of employment as a Registered Nurse in the private sector, he commissioned into the United States Air Force Nurse Corps in 1996 and has served tours of duty in Alabama, Mississippi, Alaska, South Carolina, Japan, New Jersey and Virginia. Rob’s interest in genealogy grew from an interest in the colorful family stories portrayed by his mother and her siblings throughout his childhood. While serving his first tours in Alabama and Mississippi he began to collect some data on the family. In 2002, he decided to begin putting that huge amount of data into a format to be shared with others. The result is his first published work, Barksdale Chronicles in America, Volume I. Rob recently retired from military service after 18.5 years. He is currently working on the second volume of the Barksdale Chronicles featuring Collier Barksdale, as well as, his memoirs as an Air Force Nurse.