I Was Compost When Compost Wasn't Cool

My Forty Years of Trials, Tribulations, Failures, Successes, Mentors, and Memories in the Business of Composting and Farming

by Stevan A. (Coach) Brockman 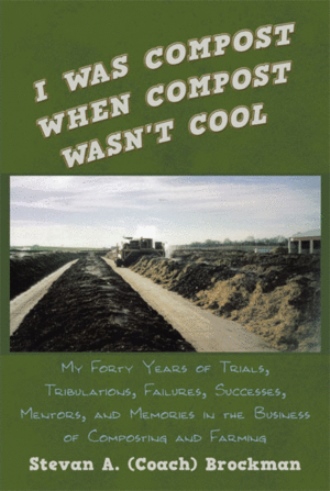 We used the K/W turner from February 2001 until October of 2004. The only time I had any problems with the machine was on September 11, 2001. For some reason, the machine would not move forward or backwards. Starting at nine in the morning, one of my loader operators came over and said, "a plane had hit one of the towers in New York City." I did not give it much thought since I was trying to figure out what my problem was with the machine. About an hour later, the same operator came over again and said, "the other tower was hit, a plane hit the pentagon, and a plane had crashed in Pennsylvania." I still could not really grasp the magnitude of what he was saying, still trying to get the turner to move. Just before noon he came over and told me, "that both towers were now flat on the ground." I stopped what I was doing and what the other four men were doing and went into the office. I found an old black and white television, plugged it in, and seen first hand all the destruction that had happened that morning on the east coast. The President was in the South at the time and was flown out into the middle of Kansas, I believe, until it was safe for him to return to Washington.

The skies over the compost site were always filled with white jet streams from all the aircraft that flew over our area. The FAA had grounded all flights around ten in the morning, and the skies were perfectly blue from horizon to horizon on September 11

th. Around four in the afternoon, I did see a very strange site in the southern skies about twenty miles from our compost site. There was a large blue and white 747 escorted by two small fighter jets all flying at about fifteen thousand feet heading east bound very quickly. I figured it must have been President Bush heading back to Washington. I was standing on top of the K/W turner at that time, and after watching the planes go out of sight, I looked down at my machine and noticed a wire was off on the backside of the engine that was used for grounding purposes. I reattached the wire, started up the machine, moved it out of the way, and went home to be with my family. 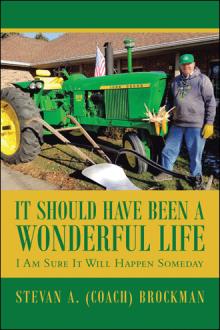 It Should Have Been A Wonderful Life
Stevan A. (Coach) Brockman
$13.99

Experience the wild roller coaster ride of a double addiction. It did not involve drugs, alcohol, or any of the other usual suspects, but an addiction to the very unusual combination of composting and farming. It started at a very young age and has lasted over forty years without interruption. Because of the addiction, my health, my family, and my well being never got in the way. It will be a great treat to meet all the wonderful mentors and roll models that was my great pleasure to work with and interact with. These people were all movers and shakers, they were all innovators, and they were all on the cutting edge. They could all handle a tense situation very smoothly whenever it arose, and all should have a book written about each of them. You will get a very close look at what it takes to compost and farm in a big time arena. What it takes as far as machinery, manpower, management, money, and the part mother nature plays in all of this. I could not have been born at a better time or in a better place. An exciting autobiography about a wonderful career and a cast of individuals that I would not trade for anything. They all allowed me to be green was green wasn’t cool, and most importantly, to be compost when compost wasn’t cool.

This first time author has been a lifelong resident of the Joliet, Illinois area that sits about forty miles southwest of Chicago. He grew up in a rural, middle class environment, the third born in a family of four. He graduating from Laraway Grade School in 1965, Joliet East High School in 1969, Joliet Junior College in 1971, and then transferred to the University of Illinois for his final two years of college. He graduated in 1973 with a BS in Agronomy with minors in Plant Physiology and Agriculture Economics. He got married shortly after college to Debbie and both still live within a few miles from where they grew up. The author had the great fortune to work full time as a farm hand and eventually compost manager for Gorman O’Reilly for over seventeen years until his untimely death in 1982. He continued the passion and addiction to compost and farm with Fred Noorlag who started Compost Products, Inc. in 1983 in LaSalle County, Illinois and unfortunately died in 1987. He worked for his family who continued to operate Compost Products, Inc. until Fred’s grandchildren decided there was no longer a need for the author’s services four days before Christmas in 2009. It finally gave him time to write his autobiography about the last forty years involved with composting and farming and to reveal a very impressive list of most respected and interesting individuals he has met and worked with along the way. The author has spent a lot of time on other composting sites in the U.S. over the last twenty years as a consultant to the industry. He still has plans to be involved with the organics field in some way, hopefully within the same general area as he is living in now.