The Berties of Grimsthorpe Castle 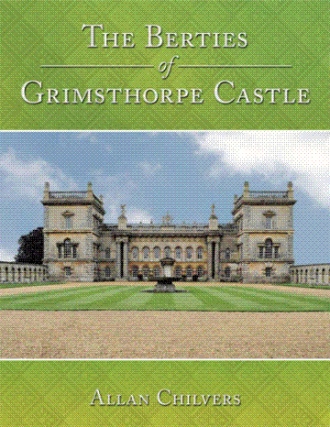 Step by step, however, they retreated bravely, and Rupert, who had returned from his charge, sought in vain to collect his scattered troopers, so as to fall again on the rebels; but some were plundering, some chasing the enemy, and none could be got together. Robert was shot through the thigh bone, and fell. He was instantly surrounded by the rebels on horseback; but his son, Montagu, Lord Willoughby, seeing his danger, flung himself alone among the enemy, and forcing his way forward, raised his father in his arms thinking of nothing else, and unheeding his own peril. Montagu found his father  lying in front of his own regiment, with one leg broken by a musket shot. Now this happening at that point of time when they they received the charge of the enemy’s horse, so that it was impossible to carry him off, he stood undauntedly with his pike in his hand bestriding his father and in that posture wounding one of their Captains in the face and almost pushed him off his horse; but his own men at the same time giving back , he was left engaged in the midst of the enemy choosing rather to be taken with his father that he might be in a position of rendering him what service was in his power, than to save himself leaving him in that distress.

The throng of enemy around called to him to surrender, and, hastily giving up his sword, he carried his father into the nearest shed, and laid him on a heap of straw, vainly striving to staunch the blood. It was a bitterly cold night, and the frosty wind came howling through the darkness. Far above, on the ridge of the hill, the fires of the King's army shone with red light, and some way off on the other side twinkled those of the Parliamentary forces. Glimmering lanterns or torches moved about the battlefield, those of the savage plunderers who crept about to despoil the dead. Whether the battle were won or lost, the father and son knew not, and the guard who watched them knew as little. Robert murmured, "If it please God I should survive, I never will fight in the same field with boys again!"–no doubt deeming that young Rupert had wrought all the mischief. His thoughts were all on the cause, his son's all on him; and piteous was that night, as the blood continued to flow, and nothing availed to check it, nor was any aid near to restore the old man's ebbing strength.

Toward Robert’s old comrade had time to understand his condition, and sent some officers to enquire for him, and promise speedy surgical attendance. Robert was still full of spirit, and spoke to them so strongly of their broken faith, and of the sin of disloyalty and rebellion, that they slunk away one by one out of the hut, and dissuaded Essex from coming himself to see his old friend, as he had intended. The surgeon, however, arrived, but too late, Robert was already so much exhausted by cold and loss of blood, that he died early in the morning of the 24th, all his son's gallant devotion having failed to save him. The sorrowing son received an affectionate note the next day from the King, full of regret for his father and esteem for himself. lost a distinguished soldier who bravely supported the King . Clarendon’s describes him as “ of  a very noble extraction and inherited a great fortune…He was a man of great honour and spent his youth and vigour of his age in military actions and commands abroad.; and albeit he indulged to himself great liberties of life , yet he still preserved a very good reputation with all men of a very generous nature and punctual in what he undertook, and in exacting what was due to him… he had very many friends and very few enemies, and died generally lamented.”   Robert’s sons Francis Bertie and Henry Bertie died in the same battle   The Bertie name was once again embellished.  Robert died .

when Grimsthorpe Castle, Edenham, Lincolnshire became the home of the Willoughby family in the 16th century when it passed in to the hands of Catherine Willoughby, Duchess of Suffolk and Baroness Willoughby de Eresby.  The widowed Duchess married her Gentleman Usher , Richard Bertie.  This account relates the history of the Berties at Grimsthorpe thereafter until 1809.   They became Earls of Lindsey , Marquesses of Lindsey, and Dukes of Ancaster and Kesteven……

The life of Peregrine Bertie, Lord Willoughby de Eresby , the Berties son. His exciting and dangerous life serving Queen Elizabeth I as a military commander, Peregrine as the quintessential  Elizabethan hero….

Robert, Lord Willoughby de Eresby , loyal supporter of the Stuarts, killed at Battle of Edgehill in Civil War.  Created 1st Earl of LindseyLife as soldier, courtier and landowner in .

2nd Earl of Lindsey,  Supporter of Stuart kings, survived the Civil War and subsequent Commonwealth, his large family and their marriages into other aristocratic dynasties.

Robert Bertie,  1st Duke of Ancaster and Kesteven ,Life under the Hanoverian administrations and duties at Court , in Parliament and as Lord Great Chamberlain

General Peregrine Bertie, 3rd Duke of Ancaster & Kesteven -. The Duchess served for many years as Mistress of the Robes to Queen Charlotte, wife of George III.

Activities as Lord Great Chamberlain, responsible for state occasions and state trials at Westminster Hall. Featured in a satire by William Jackson titled “ and Onan” along with other famous figures of the time as homosexuals.

Robert Bertie, 4th Duke of Ancaster & Kesteven. Served as a volunteer, as Marquess of Lindsey, in the English forces in the American War of Independence , serving in until he succeeded his father. A handsome and rich young man with a tendency to unruly behaviour and consorting with the wrong kind of people.

Brownlow Bertie, 5th Duke of Ancaster & Kesteven .Life in Town, and at Court of his sister-in-law , Mary , Dowager Duchess of Ancaster. Died with no male heir who could inherit the dukedom and it expired along with the marquessate.

Allan Chilvers pursued a career in corporate governance in the Retail sector in the .  At retirement he started an in-depth study of an English family, the Berties (pron. Barties) who are woven into the history of for many centuries.  He is the author of  “The Berties of Uffington” Spiegl Press 2003 ISBN 0 902544 96 9