Point of Consciousness: Extension of Creation

by Wasyl Kolesnikov and Guy Gardner 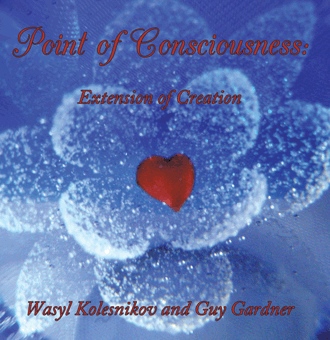 "When we do a breathing exercise either sitting or standing (later with practice - in movement, and as often as we remember) we learn to breathe from and to, the centre point 2 inches below the navel. Deep breathing also helps to calm the mind, and the centre point allows the breathing to become deeper.
Eventually this centre point becomes a doorway to infinity. That is when we breathe out from the centre - the breathe then travels outwards to infinity, or as far as we can imagine the breath to go. When we breathe in from the centre, the breath can also travel to infinity inwards. Initially this can be more difficult because we see our own mass ie organs, bones etc and wonder how the breath can go inwards.
We need to think outside the box, and go into the realm of atoms, electrons and neutrons and much smaller states. Then we understand the principal of going   outwards and inwards.
In the realm of atoms, electrons and neutrons there is actually quite a lot of space.
An atom is very small. When they split the atom, the atom bomb was made. When they split a neutron, which is smaller than an atom, they have a neutron bomb which is even more powerful than the atom bomb. So it appears that the smaller you go the more powerful something is.
To me this makes a lot of sense, because if we take this analogy all the way back to the Source (they say the Big Bang came from what appeared to be nothing), there was a point so infinitely small and powerful (and full of infinite potential) that it created the whole Universe which includes everything we see and don't see.
Because everything comes from the Source, everything is still linked to the Source.
The Source has infinite power, infinite love and infinite everything."

This book completes the trilogy by Wasyl Kolesnikov and Guy Gardner, which began with Return To The Source. Next came Transformation- A Spiritual Journey Into Yourself.

With Point of Consciousness - Extension Of Creation the theme is a ‘doing’ book, with practical Ki exercises, Tai Chi and meditations.

The idea of this last book is continued development not just of health, but of the mind-body-spirit to work as a whole unit: a whole being.

There is no limit to what you can achieve, and this book will help take you on a path to new levels.

Wasyl Kolesnikov has been a national and international mind and body development teacher for over thirty years. In ‘Return To The Source’ he explained the idea of the Source, whatever label you may give it, be it i.e. God, Allah, or Universe. Also he charted his own inspiring development from meeting his first Aikido teacher, to his gradual understanding and consolidating of how to use the universal energy called the Source to improve our lives exponentially.

In Transformation he has looked at more specific aspects which the reader can focus in on, through words, pictures and poetry, to help bring about the transformative process of change to live a more fulfilled and happy life.

Wasyl Kolesnikov lives and teaches in Oldham, near Manchester where his centre Kolsenikov’s School of Mind and Body Development with Aikido (KSMBDA) and Infinite Tai Chi (as developed by Jason Chan) is based. He has clubs nationally as well as in the Ukraine and possibly soon in Canada.

Guy Gardner is a professional writer, teacher and musician. Having started his martial training initially in Judo, he became dissatisfied with the emphasis on competition and searched for another way to train.

In 2007 he achieved 1st dan, shortly after finishing the first of his and Sensei Kolesnikov’s collaborations ‘Return To The Source.’ Having worked successfully together, it was not long before another book was in the pipeline. ‘Transformation: A Spiritual Journey into Yourself,’ is their second collaboration.

Guy lives in Dorset, where he continues to spread time between training in Aikido, writing and teaching.