Fantasy Football, How to Play and win. 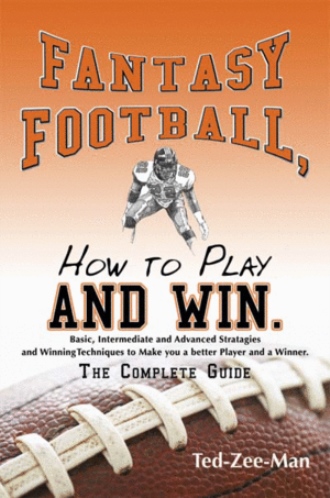 Theodore Ziolkowski, or Ted-Zee-Man, was Born August 2, 1941 in Traverse City, Michigan. He has a Bachelors Degree in Business Administration with a Minor in Mathematics.

He wasinvolved in Coaching Baseball in “Pony Leagues”, "Little Leagues" and “Babe Ruth Leagues, and Football in “Pop Warner Leagues.”

He Retired in 1994, as an outlet for the Love of Sports and his Competitive Nature. He decided to try Fantasy Football. He has played over Fifteen years. From Rank Amateur to becoming a Multiple Fantasy Football and Baseball League Champion.

His thinking, how can his Knowledge and Information help other people. He has writen his Book with careful thought about what his audience Needs or Wants. That's why he include his E-Mail address in the book. He is genuine - “the real deal.” There is no doubt that Fantasy Football is his passion, it's what he is writing about.

The majority of the information should never become obsolete. The only thing that should change is the names of the players not the concepts. The only other thing that may change is the various scoring systems which would give more value to another position.

He is sharing some of the Knowledge, Experience and Wisdom he has accumulated, over the past Fifteen years. These tips should be helpful in your Pre-Draft Strategy, Draft Plan, Waiver Wire Usage, Trading and Managing your Fantasy Football Team. Leading you to a Championship in your Fantasy Football League.