When Black and White Become Gray 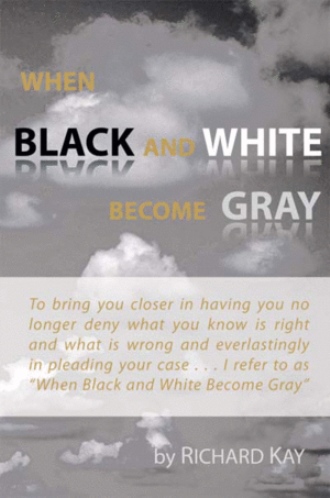 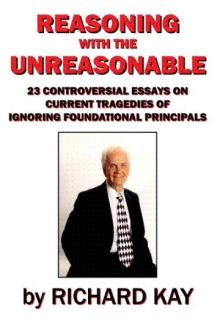 Reasoning with the Unreasonable
Richard Kay
$17.99 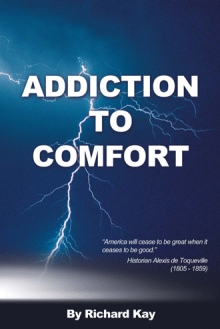 WHEN BLACK AND WHITE BECOME GRAY

Whether we talk about “Right from Wrong”, “Good from Evil”, “Black and White in contradiction of Gray”, “Capitalism in opposition to Socialism”, “Conservatives in opposition to Liberalism”, “Humanism, Secularism or Naturalism versus Christianity”, and leading the horde “Atheism” opposing all and anyone believing in the Christian values of the originator Jesus Christ, as taken from Scriptures of the Holy Bible and formed into our Constitution.

The lack of legitimate authority caused by the denial of God reinforces the Christian’s belief that God must be recognized as ruler in every sphere, including local and federal governmental politics. We are now seeing violations taking hold in this 21st century by men who want new awe-inspiring laws that bind man to authority, with exception of mans pleasure, fitness or convenience, which is not binding at all. The twentieth-century should have taught Americans that even the most basic of human rights cannot exist yet again and again apart from an absolute Christian standard. This standard is given to you in this book. Who is sovereign, and to whom is man responsible to? This source of sovereignty resides only in following Jesus Christ, and has been for over two-hundred and thirty-four years in and is still, if we in simple terms want this very source of American freedom. But if sovereignty resides in government, whether a monarchy or a democracy, behaving in an overbearing dictatorial way, man has no appeal beyond the law of the state, and has no source of Christian truths, principles and ethics. Leading only into oppression and totalitarianism, Freedom, first of all is a question of self-determination and responsibility. In the two-years it took to do research, study and having the strength or tendency to condense not by opinion but by history, common sense and reality regarding, “Capitalism”, “Atheism”, “Socialism” and the strategy used by Marxists liberals to overthrow our American freedoms.