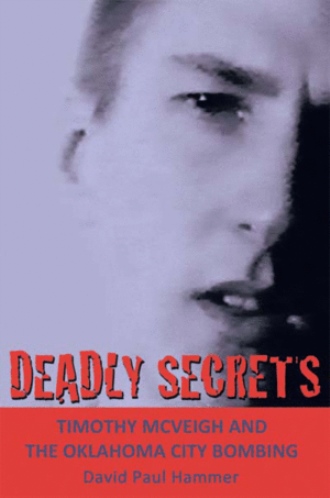 Because the events and actions of April 18-19 are most critical, and because as far as the world knows, it was just McVeigh and Nichols who set off the deadly bomb, I quizzed Timothy McVeigh many times as to who did what and when the day before and the day of the Oklahoma City Bombing.  I took notes and would pose suggestive questions to see if McVeigh would change his story. For that reason, I am able to write with confidence that the facts as detailed here are exactly as McVeigh told them to me.  He never changed any of the facts as they relate to the ARA members.

It should be noted here that Peter Langan has stated many times that he has information about the Oklahoma City Bombing: specifically, that he knows that some of his fellow ARA gang members were McVeigh accomplices in the bombing.  Langan has attempted unsuccessfully to parlay this information into a deal to win his freedom from prison. But Langan also says he never personally met Timothy McVeigh, that he was not present in Oklahoma City or personally involved in the Oklahoma City Bombing in any way. Langan has never stated he didn’t meet and know Tim Tuttle.

From a truck plaza en route to Oklahoma City, McVeigh alerted the Major of their estimated arrival time. McVeigh agreed to meet the Major and his team at the warehouse where the bomb would be assembled.  The meeting was set for 11:00 p.m. Tuesday night, April 18.  The finalized plans would be discussed and the Major could inspect the finished bomb.

After arriving in Oklahoma City, all three vehicles drove to a truck stop off  I-40 where one of the Ryder trucks was parked with the already assembled bomb inside. With Guthrie driving McVeigh’s Ryder truck, and with Poindexter and McVeigh trailing, they traveled to the storage warehouse.

During the following hours, Poindexter, with the help of McVeigh and Guthrie, built a 7000-pound bomb out of the assembled ingredients.  In addition to the homemade elements of the bomb, military grade explosives were added to the mixture of ammonium nitrate and fuel oil, known as ANFO.  These added explosives were intended to make the bomb more powerful without being easily detectable by investigators.  McVeigh told me: “This stuff worried me. It was the only part of the bomb which couldn’t have been easily homegrown,” meaning ingredients that were not available on the open market.  Poindexter assured McVeigh that this was what the Major had instructed him to do.  By 9:30 p.m. on April 18, the bomb was completed and the three men left the warehouse for something to eat.

Before returning to the warehouse for his meeting with the Major, McVeigh dropped Guthrie off at a motel in the area of I-40 and MacArthur.  Guthrie, McVeigh and Brescia had a brief conversation.  McVeigh and Poindexter traveled back to the warehouse while Guthrie and Brescia retrieved the McVeigh/Nichols bomb truck from the truck stop. Brescia and other ARA members had rented rooms at the Sands Motel on South Rockwell in Oklahoma City.  Guthrie parked one truck in the motel parking lot overnight.

The Major, with his associate Roberto, whom McVeigh had met two years before in New Jersey, arrived at the warehouse.  Handshakes all around and then an inspection of the bomb.  As McVeigh and the Major talked, Roberto walked up behind Poindexter, who stood admiring his work, and, in one swift motion,  “cut his throat from ear to ear,” McVeigh recalled.  “I jumped, but the Major placed his hand on my shoulder and said, ‘Soldier, he was only hired help, not one of us.’”  McVeigh and Roberto loaded the body into the Ryder truck with the bomb.  McVeigh placed a padlock on the door of the truck’s cargo bay and they all left the warehouse.  McVeigh explained that he had been surprised by Roberto’s actions, but that he understood, because in a mission like this anyone was expendable, himself included.

During McVeigh’s conversations with the Major in the warehouse, the Major said that nothing was being left to chance.  McVeigh learned that other members of the elite unit had installed C-4 explosives inside the Murrah Federal Building in order to insure maximum damage from the explosion.  These devices, as well as the truck bomb, were not rigged with manual fuses as has been widely speculated upon.  In fact, McVeigh had been provided a hand-held transmitter that was to be used in detonating the explosives.

At approximately 6:00 a.m. on Wednesday morning, April 19, McVeigh, Brescia and Guthrie traveled from the Sands Motel to the warehouse.  They were dropped off by Pete Langan, who returned to the motel to assemble the rest of the ARA crew. They would provide security for the bombing operation.

Beyond the thousand-yard stare, beneath the buzz cut, there was another Timothy McVeigh.  Now America finally gets to meet the real Oklahoma City Bomber, and hear his shocking account of his crime, as reported by McVeigh’s fellow death row inmate, David Paul Hammer.

The Timothy McVeigh whom readers meet here is a disturbed, insecure man, obsessed with his sexual identity almost as much as with his celebrity. He is a ticking time bomb of vulnerablity in a prison setting, living every day in fear of his fellow inmates.  Hammer has something McVeigh, the prison newcomer, needs: survival skills from a lifetime on the inside.  McVeigh has something Hammer wants: the truth about the Oklahoma City Bombing. The astonishing result is a book that punctures the myth of Timothy McVeigh, the lone-wolf mastermind.

Government prosecutors told juries that McVeigh acted virtually alone, aided only by his convicted co-conspirator Terry Nichols. McVeigh tells Hammer a strikingly different story:  that he had multiple accomplices, members of a bank robbery gang with skinhead politics known as the Aryan Republican Army. He names names.  He also names other men he says helped plan the bombing at an Oklahoma religious compound, and paramilitary training camp, known as Elohim City.  Most amazingly, McVeigh says he wasn’t the mastermind of the conspiracy at all. He says he was an undercover agent, working for the federal government, in a sting operation that apparently went terribly wrong.

After McVeigh’s execution, Hammer undertook a Houdini-like feat: to check out McVeigh’s story while locked behind bars.  Hammer turned up a wealth of fresh and compelling evidence. It’s all here in this book, for readers to join the investigation of what really went down in the greatest cold case of them all.

Death row inmate David Paul Hammer is a criminal legend.  After a childhood in Oklahoma marked by poverty and abuse, Hammer left home at age 14. He worked odd jobs, became addicted to drugs, got married, fathered a child, and wound up in prison at 19 for robbery and a violent hostage-taking incident. Except for two escapes, he has been incarcerated ever since.

In prison, Hammer developed into a master con artist, using a brilliant mind to conduct lucrative, imaginative scams from his prison cell. But he also furthered his education by earning his GED and collegiate associate degrees in criminal justice, psychology and paralegal studies. He is a skilled jailhouse lawyer and social activist.

By 1984, Hammer had accumulated a 1,230-year sentence for various crimes. In 1996, he killed a cellmate and received the death penalty. That set the stage for a strange twist of fate. David Paul Hammer of Oklahoma and Timothy McVeigh, the Oklahoma City Bomber, would soon become fellow inmates on Federal Death Row in Indiana.

During the two years leading up to McVeigh’s execution in 2001, Hammer observed McVeigh closely, talked to him in depth about his crime, and took notes.  Hammer was ready to put his considerable talents to use in the writing of this book.

Hammer has written two previous books: The Final Escape, his autobiography, and Secrets Worth Dying For: Timothy McVeigh and the Oklahoma City Bombing. In 2004, Hammer came within three days of death by lethal injection, before an appeals court granted him a stay of execution. His case is still pending.

The Final Escape …. Secrets Worth Dying For:  Timothy James McVeigh and the Oklahoma City Bombing