An Interview with the Thinking Man's Hooker 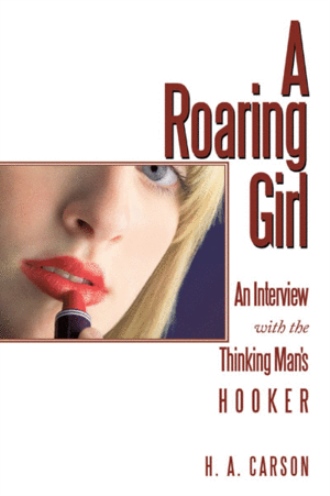 At the beginning I suppose, with the title. I'd like this interview to be entitled A Roaring Girl after Daniel Defoe's second most famous protagonist, Moll Flanders, who was:

"Born in NEWGATE, and during a Life of continu’ed Variety for Threescore Years, besides her Childhood, was Twelve Years a Whore, five times a Wife (whereof once to her own Brother) Twelve Years a Thief, Eight Year a Transported Felon in Virginia, at last grew Rich, liv’d Honest, and died a Penitent."

I, too, am a "Roaring Girl." I, too, was (nearly) Twelve Years a Whore. But unlike the irrepressible Ms. Flanders, I am not nor have I ever been a Thief, although sad to say, I've been ripped off royally and all too often--by gypsy urchins on the streets of Rome; by medina "guides" in Marrakesch; "crippled" beggars in Bombay; Hong Kong jewelers, Vegas Gigolos, and of course, the Dead Con Man... But those are other interviews. Moll was five times a Wife, but I was married only once (for three ecstatic years!). I never had a Brother (much less fucked or married him!), and, while I am no longer a teenybopper, praise the Lord, I am still very much alive! While I am not a Felon (nor have I even been convicted of a Misdemeanor!), I, too, have lived a Life of continu'ed Variety. And, in my opinion, I have always liv'd Honest. While I spent a mere Eleven years in the wacky world of Frontline Prostitution (which anniversary would that be, I wonder: leather, latex, astroglide?), I've turned a trick or two...thousand in my time. I make no excuses or apologies for having done so. A woman may use her Private Parts for Procreation and Recreation (even though forty years after the sexual revolution, society STILL seems to have problems with the latter!), so why not for Financial Remuneration? Therefore, I am not, nor have I ever felt the need to pretend to be, a Penitent. Unlike Moll, I was neither a foundling nor an orphan nor an illiterate adolescent devoid of other options. Actually, I was Valedictorian of my high school class, a National Merit Scholarship Finalist, a Member of Phi Beta Kappa, and (mirabile dictu) a Seven Sisters girl. Whether Defoe would consider me a true roaring girl or simply a poseur, I shall not presume to speculate. However, I have been, for much of my adult life, a Whoring Girl. I know Prostitution. From Flatlbacking to Phone Sex. and all forms of erotic gratification for remuneration in between. So fasten your seatbelts, Dear Straight World! It's going to be a Bumpy Read!

SO HOW DID YOU START?

First, let me say that prostitution is like anything else. It's a living. A means of making money. Period. It is not a lifestyle. It is not romantic or glamorous. But neither is it disgusting, demeaning, or tragic. It can be dramatic: often laughably; sometimes frigteningly so. Yes, it is potentially dangerous--but so are coal mining, law enforcement and, nowadays, teaching. Most of the time, prostitution is just like any other job involving physical labor. The only difference is that it pays better.

WHAT MADE HIM SO MEMORABLE ?

The first thing you learn as a hooker (and it's probably the most valuable lesson you learn in the sex trade) is this: No matter what happens, always keep a straight face. Never evince an unguarded emotion. Never laugh or frown or recoil. Never show amusement, contempt, bewilderment, or revulsion unless you are 99 and 44/100% sure that it's the reaction the client wants to see.

...My first year in the business, I saw a regular who loved eating out--in every possible sense of that term. His session consisted of taking me to dinner and eating my pussy under the table in a restaurant full of people. We'd cozy up in a booth... I'd pretend to drop my contact lense, and he'd dive under the table to retrieve it. Naturally, the first place he looked was between my legs. It was difficult to keep a straight face through it all, because while he was down there lapping my labia, people were passing, and I was asking him: "Did you find it yet, Sweetheart? Do you see it?"

My only other memorable public humiliation session was with a guy who paid me to walk him down Hollywood Boulevard with a leash around his cock and balls. Obviously, his cock wasn't visible; it was still in his pants. But the chain could be seen extending from his fly to my wrist. He walked about two feet behind me. I wore a black leather skirt and jacket and spike heel boots. Of course, because this was Hollywood, nobody paid the slightest attention. In fact, we were probably the least noticeable couple on the street. About ten minutes into our stroll, he got so excited he came spontaneously in his pants. He was wearing a condom. Semper paratus. Come to think of it, he looked like a grown-up Boy Scout--tall ...with an earnest, dorky face.

YOU DID BOTH THESE CLIENTS MULTIPLE TIMES, AND NO ONE EVER NOTICED?

Have you ever been to Hollywood? If the worst thing you see there is a "Mistress" dogwalking a "slave" or a trick dining out on a call 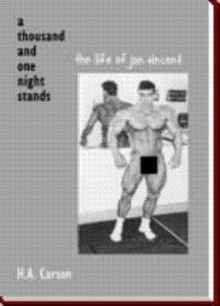 The surreal life and bizarre times of a college-educated career call girl.

A brave new look at the oldest profession, A Roaring Girl is, without a doubt, the most unusual book of its kind ever written. Part edgy, x-rated memoir; part sex-positive, pro-prostitution polemic, H. A. Carson's 400-plus page interview with an anonymous "escort" known as "The Thinking Man's Hooker," is an unflinchingly honest presentation of one woman's professional life and Weltanshaung in all its sordid/surreal, gonzo/glamorous glory. From start to finish, the book is, much like the subject herself, intelligent, outrageous, relentlessly "in your face," and utterly unique. A Roaring Girl presents a prostitute who is neither gilded angel nor fallen victim nor pseudo-sexy, "nymphomaniacal" sophisticate. She is the sex worker as female outlaw/entrepreneur; the prostitute as world-class iconoclast. Perhaps most intriguing of all, A Roaring Girl lays bare the surreal world of pay-for-play psychopathia sexualis with humor and compassion as well as the unflinchingly analytical insight of a "happy hooker" swapping stories with Kinsey or Havelock Ellis. Raw, irreverent, visceral, disturbing, and funny, A Roaring Girl is, above all, a "roaring" good read! It is astonishingly literate, unabashedly erotic; flawlessly analytical; shockingly explicit, and surprisingly (and often darkly) humorous. Carson's mystery woman turns a phrase as effortlessly and as expertly as she formerly turned tricks. Whatever else can be said of her, the whore can write.

A Roaring Girl is a  revolutionary work. It is also fascinating,  You will try, unsuccessfully, to put it down.

H.A.Carson is a freelance writer, perennial student, world traveler, and self-described "world-class iconoclast" who lives in California. Educated at the University of California and abroad, Carson is the author of A Thousand and One Night Stands: The Life of Jon Vincent, Cat's Eye: A Complete Guide To Person Care, and The Sex Workout And Diet Guide: for Real Men!