A Tale from the World of Secramore 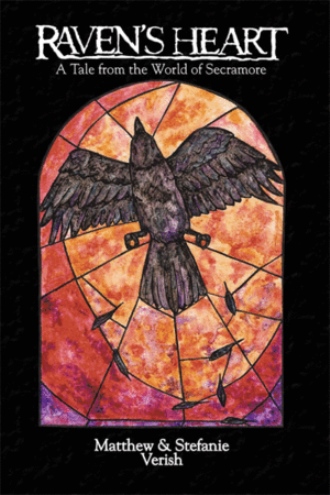 Darkness held dominion over the land, the moon and stars a lantern for the companions as they sought to stay on the narrow trail. For three long days no one had set foot outside the path; there was but one more day to go. They needed only to find the last marker.

Jinx’s stomach rumbled, and Ruby gazed at the place from where the sound had emanated. “Shouldn’t we already be at that place with the burning sand?” he asked with a child’s impatience. “I’m hungry.”

“This next stretch is the longest,” Hawkwing told him. “Once we reach the haven, we won’t have much farther to travel until we’re out of the plains.”

Arcturus turned to Kariayla and whispered, “Though we have yet to see a ghost.” He winked at her, and she managed a slight smile. She was not as skeptical of Hawkwing’s tale. “Our tracker seems rather aloof,” he continued, just loud enough for her to hear him.

Kariayla did not know how to respond. Arcturus had a tendency to be overly critical of Hawkwing, but perhaps Hawkwing’s distance stemmed from Arcturus’s attitude. “He seems friendly,” she said, not wishing to take sides.

“Hm. That is another quality about him which troubles me.”

Kariayla was about to respond, but her thoughts were interrupted by Jinx. “Look at that!”

The five travelers came to an abrupt halt. Outside the path was a phenomenon the likes of which none of them could put into words. Luminous green mist was materializing low upon the ground, flashes of light pulsating from within. The unnatural vapor began to creep toward them, filtering through the tall grasses without stirring a single blade.

“By Jedinom!” Jinx exclaimed. “What is that?”

Hawkwing’s brow creased with worry. He had a clear notion of what it was. “I suggest we keep moving.” There was the slightest hint of urgency in his voice. He set forth at a quickened gait, and the others struggled to keep pace. Hawkwing was not speaking, and they did not ask questions.

Jinx lifted Ruby into his arms to prevent her from falling behind. His eyes widened to find their group was surrounded. As the mist reached the path, it collided with an invisible wall.

“And over,” Kariayla added, watching as the vapor passed over the apex of the invisible barrier. It felt as though they were in a tunnel. “We’ll be trapped.”

“We were always trapped,” Arcturus muttered.

“What’re we gonna do?” Jinx pressed.

“We will continue to move forward,” Hawkwing announced over his shoulder, hoping to erase any doubt that the mist would find its way to them. His brisk walk bordered a light jog, the travelers almost running behind him. His focus was set on the next marker, but when his ears perceived the slowing of three sets of feet, he turned to see that the companions had stopped. Then they heard it. The sheer terror on Jinx’s face spoke volumes.

Arcturus announced what no one else dared to speak aloud. “The horn.”

Deep from within the mist came the low, resonant emission of a single horn. Its foreboding note carried, unfaltering, for what seemed like minutes. The haunting instrument’s herald chilled the travelers to the core. Then it ended. Seconds after the horn fell silent, the companions remained still and quiet. Before any of them could comment, one last great flash of light expelled from the mist. The resulting effect left the group in absolute darkness.

An exiled man wonders if he should forsake his new life and risk returning to his homeland. A troubled girl seeks redemption for a terrible crime she has committed. A solitary tracker breaks an oath in order to communicate with an infamous, supernatural criminal. A vagabond thief chances leaving behind the world he knew for an unknown destiny. An unlikely cast of characters, they are thrown together by chance, or perhaps by fate, willingly embarking upon an eccentric wizard’s mission to recover a magical stone: Raven’s Heart. A piece of the “Stone of Undoing”, Raven’s Heart is deadly. Though the stone has the ability to unravel the very essence of magic, it brings Arcturus, Kariayla, Hawkwing, and Jinx together in a mission beyond individual ambition that could determine the fate of the world in which they live.

M.S. Verish, better known as Matthew and Stefanie Verish, are co-authors as well as husband and wife. They knew they were destined for marriage when they could write together without killing each other. Their writing partnership has rewarded them with wonderful journeys into the realm of fantasy, culminating in the epic tale, Raven’s Heart. The couple shares a love of nature and art and lives in Northeast Ohio with their large family of cavies.