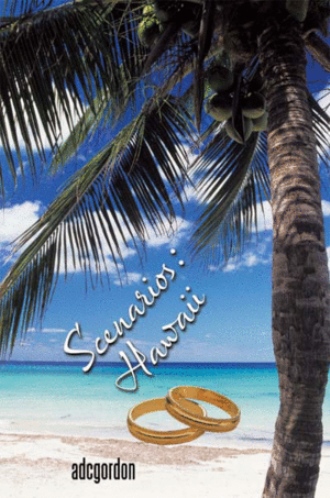 Before the sun rose over Hawaii Anessa rolled over to find herself still wrapped in Zac’s embrace.  She couldn’t help but grin, knowing that they had actually been allowed to spend the night together.  Her grin grew bigger as she lost herself in his warm embrace.  He hadn’t let go of her all night.

She remembered their conversation before falling asleep.  He was nervous too.  But his words had made her sure about one thing.  She loved him.  He wanted to make love to her.  And he was willing to wait until it was right.

She rolled again in his arms, scooting herself up just enough to be face to face with him.  He looked so peaceful, sleeping soundly.  His face was soft, his hair mussed just a little bit.  Neither of them had moved much in their sleep thanks to the exhaustion of the previous day.  A good night’s rest was what they both needed.  And Anessa knew her sleep had been even better thanks to having his arms wrapped around her.

Now she took just a moment to touch his sleeping face.  She outlined his forehead and his cheeks with her fingertip.  Then she ran her thumb across his eyebrows ever so softly and whispered a fingernail across his long, dark eyelashes.  She finished by touching just the tip of his nose and then lightly running her thumb across his lips.  “Mmm,” she sighed, “I really do love you.”  She continued to whisper.  “And I trust you…and I want to make love to you…and I want to marry you…and make babies with you.”  She chuckled quietly to herself, not believing that she had just said those words out loud.  She stopped laughing for a moment when she noticed that Zac was looking at her.

His blue eyes looked a little shocked, but not upset.  “You do realize I’m awake and listening to you, don’t you?”  He asked with a smile.

Anessa blushed and tried to turn her back to him.  “Oh no you don’t.  You’re not gonna turn away from me after waking me up and giving that little speech!”

“Don’t be.” Zac simply answered.  “Mind telling me where all that came from?”

"From my heart," she answered sincerely.

There are two scenarios in which love is looked upon as taboo, unreal, a farce in the world of relationships.  Those scenarios are the world of teenagers, and the star-crossed realm of Hollywood.

When they met, Anessa Anne Hart was a 15 year old girl with caramel-colored skin, milk chocolate eyes and wavy ebony hair, a more than determined actress.

Zachary David Alexander was the dedicated young actor decorated with dirty blond-hair, blue eyes and a near-constant smile that was being perfected by the braces in his 16 year old mouth.

Was it fate that put their pictures together at their auditions or was it coincidence?  Was it the simplicity of just making new friends or was there a true attraction between them?  Whatever the case the teen actors found their on-screen chemistry transforming into an off-screen relationship that gained them more than international fame.

In the scenarios of teens and Hollywood the taboo word was shared between the two.

I, adcgordon, proudly own the titles of wife, mother, friend, co-worker, and as of 2005, 'crazed fan' of a pre-teen musical phenomenon that re-introduced me to romance.  I admit being obsessed with the trilogy and gladly give those three movies much credit for inspiring me to write.

As humorous as that may sound, this inspiration came at a pivotal time in my life.  It coincided with the drastic decline of my father's health, and the birth of my third child.  The strain of both situations was eased, somewhat by the happiness and young romance that came from the television and movie screens.

And when I just couldn't get enough of the on and off-screen chemistry that was the trilogy's lead stars, writing about them became an outlet as well.  Fiction allowed my fantasies to come to life with written words.

My writing 'escape' brought me through my father's death and has brought me closer to my husband and my children.  The inspiration, obsession, fantasy, escape and reality have joined together to become my life.  I'm happy to now share a portion of that with you.