In the French Parade 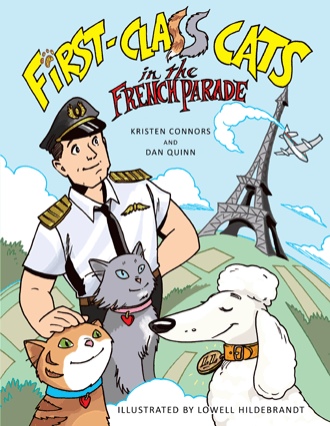 If you remember back to the previous tale, two very special cats became stowaways on a very big plane. Miss Belle and Bo caused quite a commotion by leaving their seat and misbehaving. After the cats learned their lesson, Captain Dan gave them a special seat up front where he could watch them. He called them his first-class cats, and they began to travel with him everywhere he went.

The plane landed at the busy French airport, and after every passenger had stepped off, Captain Dan announced, smiling, “Passports over here please; follow me!”

Miss Belle and Bo stretched their tiny back legs and followed Captain Dan to a long line of people. At the counter, Captain Dan was given his stamped passport, and soon they were headed out the door. Warm air and sunshine welcomed them to , and delicious aromas stopped them in their tracks!

“Good news!” Captain Dan said as they sat in a taxi. “My friend Claude and his poodle, Luc , have agreed to meet us later on and show us around!”

“Well,” Captain Dan said out loud, “Luc Leon is a French name, and every country has different traditions. That’s what makes international travel so special and interesting! There is so much to learn about the world, my little cat angels.”

The cab jerked in and out of passageways, and darted quickly on the bumpy cobblestone streets. It finally arrived at Hotel Henri. Its name was spelled out in gleaming gold letters above the huge door.

Gabriel Gaston, the happy hotel manager, bounded over, his black cape swinging behind him. Noticing the two cats staring up at him, he smiled back from under a thick mustache and asked Captain Dan about his two visitors. 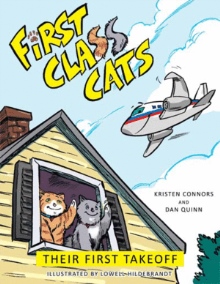 Miss Belle and Bo are two fearless cats who once out of boredom and adventurous spirit, stowed-away on Captain Dan's great big jet in Book 1:"First-Class Cats, Their First Takeoff". They now get to travel far away from the little wooded neighborhood they live in, exploring the world and discovering fascinating adventures with their owner and pilot. He nicknamed them first-class cats because they were seated near him while sharing one, first-class seat. This was also very easy for him to monitor their behavior throughout the flight.

Captain Dan Quinn, a pilot with a major airline, was packing his suitcase for an overseas trip and crafted a storyline about his own two cats who secretly stowaway in his carryon bag to travel with him. With the help of a friend and neighbor Kristen Connors, the actual story came to life on paper. Dan and Kristen's shared passion for international travel and their appreciation of different cultures and customs was easily combined through adorable tales of cat adventures into their first book, "First-Class Cats". As we continue from the inaugural flight story, readers arrive in Paris, France where the cats discover foreign customs and learn all about the great French city.