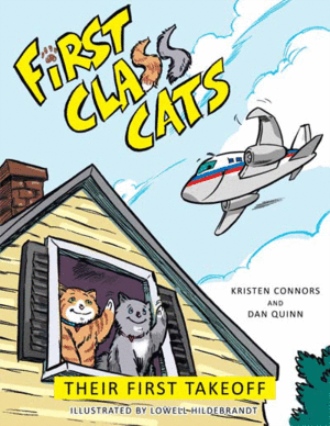 Once upon a time, in a beautiful home tucked away in a thickly wooded neighborhood, there lived Captain Dan and his two cats, Miss Belle and Bo. Captain Dan was a handsome pilot, who wore shiny gold wings on his shirt and flew a great big jet. After taking off from the busy airport, he would fly his plane over the house and dip the wings to wave at his cats.

These adopted cats were no ordinary cats. Bo was a red, tabby tomcat with the greenest eyes ever. His eyes always seemed to sparkle with mischief and adventure. His sister, Miss Belle, was the prettiest cat in the land. Her gray and white fur was like soft silk, just a bit longer than Bo’s.

One day, Bo and Miss Belle watched Captain Dan packing his bag for another trip. Bo turned to Miss Belle and said, “We could curl up in the corner of the suitcase like when we sleep; no one would know!”

“Let’s go on an adventure and ride high in the clouds,” Bo cried out, his tabby paws open in the air. “It will be like we’re on top of the world!”

Miss Belle lowered her head and nodded but was unsure. Together, the two cats squirmed their way into Captain Dan’s carry-on bag. Before they knew it, they were being carried away and onto the plane. They heard the engines roar, and within minutes, they were taking off! Whoosh! went the plane as it climbed into the sky.

“We can’t stay here the whole time,” Bo whispered to Miss Belle in the dark. Miss Belle was still unsure about this whole adventure. Together they heaved and pushed their way out of the suitcase.

Wow! thought Bo and Miss Belle as they popped into the cabin. 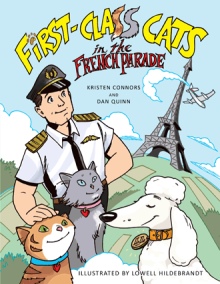 Meet Miss Belle and Bo, Captain Dan's fearless cats, who out of boredom and adventurous spirit courageously stowaway on his great big jet. Find out how they lovingly sneak aboard the plane and into the cabin to encounter funny adventures throughout the flight. In the end, they are seated up-front near Captain Dan who denotes them "First-Class Cats", and together, they begin to travel the world. This endearing tale will leave a lasting impression on readers of all ages as well as offering a great introduction to air travel and regulations on-board the plane.

In this inaugural story, the authors' hope is to promote travel, culture, history and geography to children of many ages, all told through the eyes of two beloved cats, Miss Belle and Bo.

The idea of awarding them a first-class seat is not around luxury, comfort or food, but rather the proximity to Captain Dan. With the cats seated near the cockpit, he is able to monitor them throughout the flight ensuring good behavior. The authors' other intent is to spotlight the term "first-class cats" in correlation to obedience and good deeds; something they will look to do on every trip.

Please sit back, buckle your seatbelt and prepare for takeoff as Miss Belle and Bo, the two, "new"  first-class cats, discover how much fun air travel can really be! Turn the page… and let the adventures begin!

Captain Dan Quinn, a pilot with a major airline, was packing his suitcase for an overseas trip and crafted a storyline about his own two cats who secretly stowaway in his carryon bag to travel with him. With the help of a friend and neighbor Kristen Connors, the actual story came to life on paper. Dan and Kristen's shared passion for international travel and their appreciation of different cultures and customs was easily combined through adorable tales of funny cat adventures to formulate this single storyline. Their plan to offer continual and on-going travel discovery for children will become a series of stories, transporting readers to many cities around the world through their "colorful tails". (pun-intended)