The Ghost, The Thief and the God-Hammer 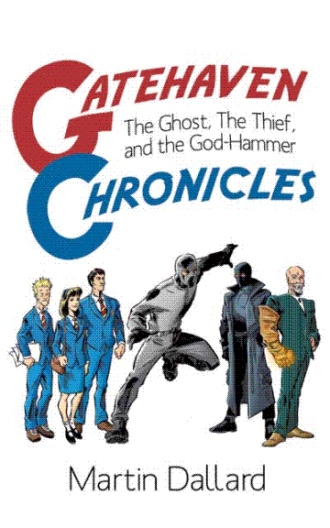 "It was midnight before he made his move. He slipped from beneath his bed quilt and regarded his reflection in the mirror on the wardrobe door. The dark grey body suit covered him from his toes up to his neckline. It had taken him six weeks of toil with the sewing needle to get the finished article. He went back to the bed, crouched down and pulled from underneath it his school sports bag.
Delving inside he withdrew the carefully folded items. He put on the dark gloves. Next, he pulled on the mask, fussing with the position of the eyeholes. Then he reached for the cape. He fastened it around his neck with press-studs hidden beneath the cloth.
At last, he was ready for the night! Crossing to the window, he drew back the heavy curtains and opened the catch. A cool breeze washed over him. With the sound of his own heart hammering in his ears, he climbed out onto the windowsill, eyeing the apple tree opposite him.
A flicker of doubt crossed his mind as to the risk he was taking.
“You can do this,” he muttered under his mask. He kicked hard away from the sill, his legs propelling him across the gap, fingers claw like, ready to grab the closest branch. At the last second, he felt a tugging from behind. He lost all his forward momentum.
And down he went.
He landed hard; his fall broken by several dustbin bags beneath the tree. His weight split the bags open, spilling their contents onto the patio. The wind was knocked from him and he lay groaning for a moment. Just then, Mum and Dad’s bedroom
light went on overhead.
“What was that Bob?” he heard his mum say harshly through the partially open window."

Meet the Grey-Ghost, GateHaven’s very own super hero. He’s a shadow in the night that all evil doers should beware. There’s just one problem: he’s new to the game, and if you bump into him, trouble won’t be far behind.

He’s here to make the streets safe again... if he only gets his homework done on time!

Martin Dallard lives in Broadway, near Evesham in Worcestershire, England.  He is an avid comic book reader, and works as a welding engineer and team leader in designing and welding security vehicles and fuel systems for trains.  Martin is currently writing the next book about the city of GateHaven and its resident super hero, Kyle McKinley, also known as the infamous Grey-Ghost.