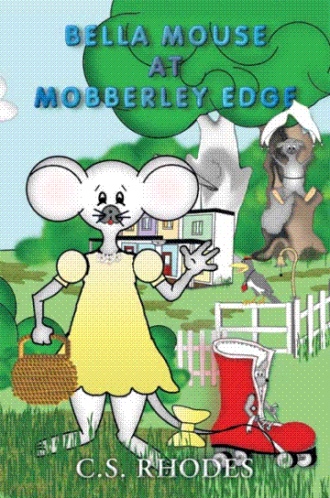 Squirrel seesawed on the plank while he waited. It rolled perfectly and he just knew this was going to work. In fact, this was fun and Squirrel decided he might make one of these for the others to relax on. Then he heard the sound of Anonee Mouse whistling to himself as he walked along. He stopped at the edge of the clearing. “Is this it?” he asked pointing at the log and plank.

“This is it,” said Squirrel, “the Mobberley Edge launch pad.”

“Oh,” muttered Anonee Mouse. He was not impressed. “So what happens next?”

“Well,” said Squirrel trying to hide his excitement while climbing off the plank and lifting the wing, “you hold onto these loops with the wing on your back,” he held up the wing for Anonee Mouse to see the loop in each corner. “Then you stand on the bottom end of the plank over here,” Squirrel stepped onto the plank. “I climb up to that branch up there,” he pointed to a branch, “and jump onto the top end of the plank. Now, I am much heavier than you, so the plank swings down on my end and your end goes up so fast it launches you into the sky!” Anonee Mouse was wide eyed with terror! Squirrel went on as though he had done this many times. “If you notice you will not go straight up. You will go up and forward because the plank swings through an arc. When you are in forward flight stick your tail out straight behind you and fly as far as you can. We can try turning and all that sort of stuff when you have mastered flying in a straight line. All that understood?”

“Right then, come over here and let’s attach you to the wing,

Bella has to leave her home due to the arrival of a cat. On her journey looking for a new home she befriends Squirrel. Bella’s hillbilly cousin Hillibip, gives them directions to Mobberley Edge. Bella and Squirrel find an old dolls house there and move in. They call it Thistledown Lodge. They make friends with King Rat (good guy) who owns Mobberley Edge rubbish dump. This is the source for everything they need including precious silver and gold milk bottle tops. New animals arrive and each tells its life story to pay for accommodation. Soon a little community is established and the adventures begin. They clash with Scraggy Rat, the ruthless leader of a renegade bunch of rats at Finkle Faggot rubbish dump when he attempts to steal their precious milk bottle tops from Mole’s Bank. The story moves swiftly, packed with adventure, intrigue, daring raids and rescue missions, amazing inventions from the ever resourceful Squirrel and his reluctant assistant Anonee Mouse, and the emotional round-a-bout of fear, sadness and happiness. The annual Mobberley Edge Grand Prix gives love struck Anonee Mouse the opportunity to prove himself worthy of Hillibip, but what follows leaves Mobberley Edge in shock.

Welcome to our first book. C. S. Rhodes is a husband and wife team. The idea for the story came from seeing a discarded dolls house in a field near our home in rural Bedfordshire, England. We thought it would be a great home for little critters living in the fields. We bounced the idea around and the story started to take shape. Words were revised to help create a distinctive personality for the characters. So we worked together to bring Bella and her friends to life and believe we have a very unique story here. If you get just a fraction of the amusement from reading it that we got from writing and illustrating it, then it will have all been worthwhile.