Marianne Brown and 'The Veil of Truth' 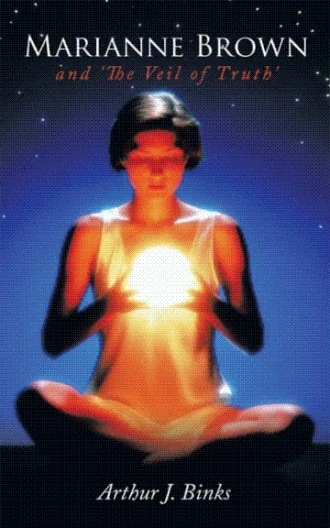 The force was such, that monster’s head was thrown backwards, allowing Jonathon to follow up with a huge clenched fist that struck the fearsome creature between its eyes.  That was enough, the dragon could take no more; with a scream of pain and a crash of shattered timber, it made a hasty retreat into the forest.
‘Why, you were marvellous,’ Marianne called to the giant, ‘for a moment I thought we had a problem.’
Jonathon glanced down on the travellers, shrugging his shoulders in embarrassment.
‘No, not at all,’ he assured them.  ‘There was never a need for concern, that dragon was only a playful youngster, though I reckon we ought to be moving on.  It won’t be long before the mother comes seeking revenge.’  With that, Jonathon moved off at a quickening pace that progressively increased to a jog.  A gait he kept up until they were far away, from the scene of their stirring encounter.
Their unceasing journey continued throughout the day and for most of the night, which pleased Marianne immensely.  If he continued like this, she would arrive at her destination, much sooner than expected. It therefore came as something of a surprise, when after a only a few more miles, Jonathon suddenly stopped, and lowered his passengers to the ground.
‘I’m afraid this is where we part company,’ he announced politely.  ‘I’ve enjoyed our encounter and I’m certainly going to miss you.  But at least you’re two hundred miles nearer to where you want to go.’
Without further ado, he seated himself on the ground and as he settled back against the face of a tall limestone cliff.  Marianne and Mr Bumble saw his eye lids flicker uncontrollably; moments later he had fallen asleep.  As the questors set out into the unknown, neither Marianne nor Mr Bumble could help but giggle.  The noise of Jonathon’s snoring was so loud; he could still be heard long after they were out of sight.

When a little girl’s vigil at her father’s bedside is interrupted by a knock on the door. Little does Marianne realise that she is about to embark on a journey that will change her life forever. The visitor, an old gypsy woman with mystical talents, discusses her father’s condition while sharing Marianne’s lunch.  For her generosity, Marianne is transported to a world of myth and magic.  Where she hears of an ancient relic, which could bring about her father’s recovery.  Marianne seeks the advice of a friend, Mr Bumble, who accompanies the little girl in search of the fabled ‘Isle of Avalon’ and the ‘Veil of Truth’.

Arthur J. Binks was born, and lived in the West Riding of Yorkshire, where he served an apprenticeship as a motor engineer, followed by two years National Service in the army.  Arthur then set up a partnership in a garage business. After moving to Scarborough, he made two long voyages on his yacht, the first across the Atlantic and the second from the Caribbean to New Zealand.  During this last voyage he kept a journal of his travels, and on his return.  Arthur wrote his first book ‘Wine, Women and Sailing’, soon followed by a second novel ‘The Secret Reich’.