The Good, The Bad, The Ugly 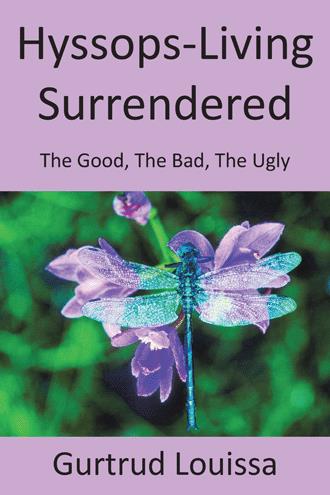 The very beginning of this life story was long before anyone was ever aware that the very choices they were making, the almost repeated experiences that spelled devastation mingled with moments of pure joy would ever be exposed in words for any and all to read as a testimony toward their risen King of Kings.
The Holy Spirit was revealing unto her the great significance of the words Jesus spoke upon the cross: “ELI, ELI, LAMA SABACHTHANI”; “My God, My God, why has though forsaken me?!” This was of such great importance for Jesus to have felt the depth of emotions He did while hanging upon the cross in agony. Bearing the nail piercing, the stripes, the wounds, the ridicule, the shame, the mockery, the pain and then to feel the rejection when the Heavens closed up, and why?
He did all this; He took and bore all this because it was the Father’s will - all for the sake of LOVE.
(Excerpt from Ch19, ‘WHAT ARE YOU LISTENING TO?’) ‘Being Real’ can prove to be risky business. When you open up your life for others to see and then when you see yourself the weaknesses within you and where you fail along the way, all of a sudden you want to withdraw and hide, all of a sudden you don’t really want to be so transparent anymore. Ramona has experienced this over and over with choices she made while raising her teenage daughters and even now in her present life of ‘widow ship’ and adulteress. She has come to the realization post many a decision that in looking backwards is the only time she had the 20/20 vision she feels that all the struggles she brought upon herself by her poor choices and not from living the surrendered servants life. Why was she so disobedient to her GOD? Why did she fall away from one whom she loved so dearly and would her true lover of her soul ever receive her back fully forgiven and restored
(Excerpt from Ch.20, ‘ARE YOU JUDGING OTHERS REALNESS’) What does it truly mean to see the realness in others and not judge that realness? When you see someone with illnesses and infirmities, when you see someone with addictions and just stuff in their lives, do you judge them, do you walk away from them, and do you reject them? Do you even understand what an infirmity is? Sure, we all know what an illness is. An illness we see as a medical condition that may actually remove a persons vitality or strength to live as they would if they were well. What about infirmities? Infirmities is the lack of strength and vitality, a character flaw, a weakness or failing in somebody’s character. Now if you do not judge someone with an illness why would you judge someone with an infirmity? Both has the lack of vitality to be a whole an healed person whatever the reason is.
(Excerpt from Ch.21, “WHAT ON EARTH IS GOD DOING?) So, how did Ramona ever go from a devoted wife to the same man for 25 years, to widow, to living with and marrying a man who was betrothed to a can of beer and allowed the spirit of addiction to control his life and actually loving this ‘Jesse’.
Because for one, she allowed her fleshly desires to over take her mind and the spirit of loneliness over shadow her thinking. Also, because she seen something within ‘Jesse’, something good, buried deep beneath the lies, pain and agony that he covered up with the numbing effect of the alcohol drug. ‘Jesse’ was believing the lies of the enemy that there was something wrong with him, there was doubt within him. Even though he desired so desperately to rise above this inflicted doubt he could not seem to break free. He just continued to do the same thing day in and day out to numb the almost paralyzing effect of this doubt. This repeated activity of the hand grasped around that can of beer was like a pacifier to his soul and for the very life of him he could not let go.

This book is about what is REAL, living a surrendered life to JESUS. It is written for the benefit of all people. It is especially for those who feel like they have messed up more than they ever got anything right. This is to guide you in the middle of all your mess ups, all your screw ups, all your very poor choices and live each day, knowing even in the middle of all the crap this life throws at you, that you are loved and not rejected. It shows by example how to do this on a day in day out basis with real life issues. This book will guide you even in how to hear the very voice of GOD in your life, even if you have never heard it or have just fallen away from it. At the completion of this book you will have a deeper hunger for a closer walk with JESUS and will come into the captivating love that awaits you.

MONA B. was born as Ramona Loyce Brothers on May 20, 1962. She graduated from Samford University, Ida V. Moffett, School of Nursing, in Birmingham, Alabama, in May 1983 and received the Christian Leadership award that same year from the university. She is the youngest of five children and born to Reves and Maudie Brothers on a small rural farm near Boaz, Alabama. She was married at the age of 21 and her and her now deceased husband, Alan Harold Rosser, had three daughters Telitha, Sabrina and Katrina. Ramona and Alan were married for 25 years. Ramona refers to herself as a survivalist, meaning she does not get knocked down very easily and usually is at her best when life is at its’ worst. She has a very close relationship with her Lord and Savior and He absolutely ROCKS her whole world!