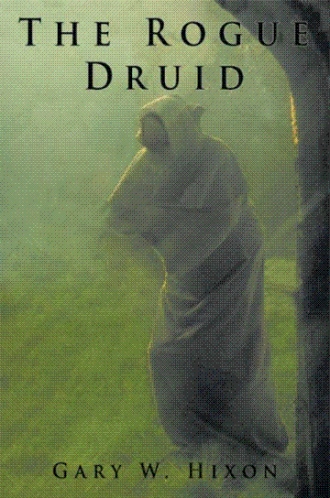 The Rogue Druid appeared at the peak of the hill again. With great speed and agility that defied his lean, almost delicate body, he came down the slope.  Not in a way that a normal man could descend such a steep incline, but more like a cat or some other animal designed to cling onto steep cliffs and hillsides.   When he was on the road he stood upright in front of Bubinda.   Although his black hood was up to conceal his face, the druid nonetheless knew who it was.
“Nice footwork,” said Bubinda, flippantly, then more seriously:   “Well, Galfall, we meet again.  I don’t think either of us would have foreseen that it would be in circumstances such as these.”
“Is the Lady so desperate that she takes for her final druid the most depraved, feeble man of his age,”   Galfall replied, in that strained low voice.   “So abhorrent that everyone he has ever met has a reason to want to throttle him with their bare hands.   Especially the members of his own family.”
“A man can change,” the druid replied.
“Not you. You can never change.  You are too corrupt … too enveloped in your own self-pity … your longing to have what others have.    You have lived your life so immorally and did far too many evil deeds to ever expect to turn over a new leaf and begin again.”

This is an epic story which takes place in many different lands.  It tells the story of Carthrall – a new king who will unite the Shiremen and the Bodmifflians.  It is about the ruling class of Remrah - a city that used to rule over them.  The power of this story lies in the moral questions that are explored in a world where evil manifests itself outwardly and inwardly, and magic can help solve problems.  There are joyous celebrations and grueling executions, a gentle romance between Carthrall and Salissa, and a dark obsession that the “rogue druid” has for Salissa.  This is a story of warfare and bloodshed, love and loss.  The central theme to the book is one of redemption, asking whether someone who has committed the vilest of crimes and who is utterly loathed, but changes and truly repents, should be forgiven and allowed redemption.

Gary W. Hixon lives in Whitby in North Yorkshire, England.  He has also published The Boss Throne which is a tale of courage, companionship and men who wish for a better life….. but also of cowardice, betrayal and bloodshed which sets the stage for this, the sequel.