Chronicles of A Momma's Boy

A Collection of Poetry and Short Stories 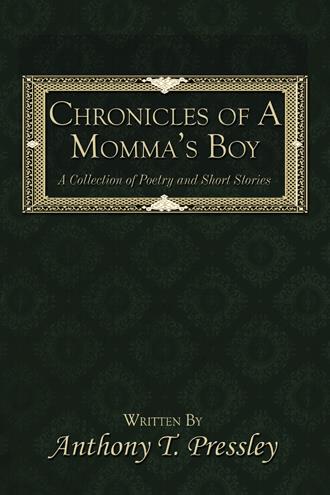 The Day My Brother Bernard Shot the Bus Driver

When I was a boy about eleven or twelve

My family had a bad day that I remember so well.

It was a Sunday early afternoon

We were all about to leave for church real soon.

For on every Sunday you did not have to search

Because the whole Pressley family was on it the way to church.

My moma and daddy were married for fifty three years.

I can remember seeing both moma and daddy share their tears.

We were a big happy family with lots of joy and toys.

Lots of loving laughter and lots of fun

But this particular Sunday would not be one.

This particular Sunday would end so bad.

This particular Sunday would test the strength the family had.

I remember this Sunday morning started early and sweet.

With a house filled with children dressed up nice and neat.

Everyone was dressed and ready to go to church

Except my big brother Bernard could not be found no matter where we searched.

He was a gangster teenager, thorough and hard

Even though I always knew he too believed in God.

He was the second son of the ten

Though the toughest one to me my best friend

But on this particular evening he would be tackled, shackled, handcuffed and barred.

Because of the bus driver who was shot by my brother, Bernard.

I was just a little boy but I remember it so well.

A family tragedy would be ashamed to tell.

Bernard was just a teenager back in 1974.

When he and his friends boarded a bus to downtown .

They had a gun on their possession and they intended to rob a store.

But the bus driver approached them for boarding by the back door.

“Come on you hoodlums get off of my bus”

The driver screamed at them as he put up a great big fuss.

He asked them for their tickets and they did not say a word.

These transfers were stolen is what one witness heard.

And just as the hoodlums were beginning to run.

One shouted here Bernard and passed him a handgun.

This innocent Sunday afternoon would turn into one big mess

AS MY BROTHER Bernard shot the bus driver three times in the chest.

How could he do something so very bad.

I wonder what was running through my brother’s head.

“Chronicles of A Momma’s Boy” is a collection of poetry and short stories that represents the life and experiences of a man raised in the inner city with an appreciation for the world.

Anthony Tyrone Pressley is a native Baltimorean gifted in the area of creative writing, public speaking, folkloric expressions and poetry. Growing up the seventh of ten children to two hard working and dedicated parents, Bertha Lee and Leroy Pressley, love and culture inspired his creative expressions. While studying at the of , Anthony was awarded a life changing experience as an exchange student to . This opportunity expanded his insight and appreciation for people around the world.

Anthony was published as a teenage columnist with the Baltimore Afro-American newspaper and co-hosted a live television talk show in his senior year of high school. He is the author of two gospel musicals, “Daughters of God” and “Psalms of David”. As a boy, he was requested to read at weddings, banquets, funerals and other celebrations. He is renowned for his ability to capture an audience with heart filled true stories. He is the recipient of the First Place Award for the Washington D.C. Open Mic Spoken Word Competition 2007 with his dramatic short story entitled, “The Day My Brother Bernard Shot the Bus Driver”.

His professional career includes serving as a Community Organizer, Legislative Aid, Director of Community Resources in a non profit community development corporation, grant writer and manager in the field of hospitality. He is a people person with a heart for children choirs, stage and politics.