The Maids of Havana 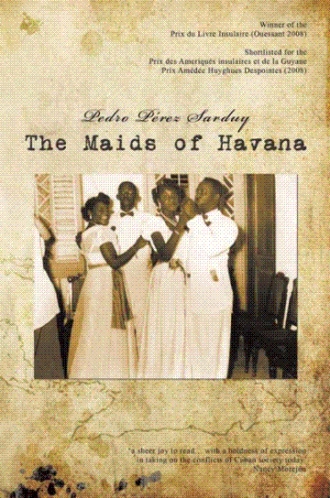 Halfway through the morning, Maité would pop over. She was well trusted by the Menéndez family, where I worked, and señora Ofelia was very happy I’d got to know Maité, since she was highly thought of among all the maids in that part of Vedado.
‘Look, that Guéstinjaus mixer is one of the best. To work it all you have to do is move this button to the right, to the speed you want, depending on whether you want to chop or liquefy… Like this.’
Then she gave me demonstrations of how to use a cream whipper, a lemon squeezer, and finally an electric frying pan. Those early days in the Menéndez house were a real apprenticeship for me, and Maité couldn’t have been more helpful.
Bit by bit, I began to make friends with some of the other maids in the neighborhood. Often, at night after we’d finished our chores, four or five of us would meet at one or other corner building and talk about our work, our lives, and of course our sweet and bitter loves.
That night, Edelia, a very likeable jabaíta from Santiago, introduced me to the rest of the girls who already formed quite a close-knit group.
‘So, you work in the Menéndez house?’
That was how one of the girls greeted me.
‘Well, be careful. Make sure she pays you. She’s very nice, but she doesn’t like paying her maids.’
Another of the girls, Maritza, who later told me she’d had a lot of problems when she worked for señora Ofelia, finished for her:
‘That’s why her maids leave her. She doesn’t like to pay.’
Now it was my turn, and I had to do it in the best possible way. I sat down slowly, taking care with the pleats of my blue muslin skirt. I asked Edelia for a cigarette. I think it was the first time I smoked a whole one. I lit it and inhaled the first puff of smoke, thinking all American cigarettes were mild, like ‘Kool’; but that ‘Camellito’, as Edelia called Camels, was much stronger than any I’d ever had before.
‘You must be joking, girl. She may not have paid others, but she’ll pay me. I came from the country to work because I've got two children to support.’
Three days hadn’t gone by since that conversation when one mid-morning señora Ofelia came into the kitchen for a cup of coffee, as she was in the habit of doing. I warmed it and served it to her straight away. I was about to go out to the store, but had time for a brief conversation. She was very pleased with my work, and, she told me, although she hadn’t received any references for me, she liked the way I went about things.
‘What a coincidence, señora, talking about references, just the other day I wasn’t given very good ones for you!’
I knew saying it like that would take her aback. I’m sure she wasn’t expecting it. She froze, like a piece of ice, fearing the worst, I imagine.
‘What?’
That was all she managed to say, leaving her little black china coffee cup under the sink tap. It was the only one left of a set of six that had been a wedding present. I didn’t give her time to recompose herself.
‘Yes, you see some of the “criaditas” round here, as you all like to call us, have told me you don’t like paying your maids. I said maybe you’d kept someone else's money, but there was no way you would do that to me, because I came to work in Havana to support my children.’
This time I did give her chance to regain her self-control. Of course, I didn’t tell her the other things they'd said about her, since all I was really interested in was my work.
I made to serve her more coffee, but her mind was somewhere else. She lit up another cigarette. The coffee was still warm. The small pewter mug in which I usually reheated the coffee, letting it sit in bain-marie, kept warm for a long time. Not a morning went by that señora Ofelia, when she was home, didn’t drink a couple of good cups of coffee. I washed the black cup, dried it very carefully, even trying to bring out its shine, and poured just a bit. At last she said:
‘Oh, Martucha! What they’ve told you is a lie, because the only one I didn’t pay was a girl called Ela and that was because she left for the country without warning.’
‘She let you down?’
‘Yes, and how!’
‘Well, señora, I don’t see why you should think that. When you people don’t need us any more, you just fire us without much of an explanation, without asking whether our children, or our own food depends on the few pesos we earn serving you. It’s enough to say, “Look, so-and-so, I don’t need you any more,” and that’s it.’
I went about my work in the kitchen, and I have to say it was gleaming, as I liked to see it. I washed the little black porcelain cup again, and this time put it on the pink rubber drainer. I waited to see what her next reaction would be, without rushing her. Her response began with a half-complicitous smile, and perhaps a certain irony. She drew on the ‘Chester’ she was smoking, exhaled a thick puff like women of the world do in those Argentinian films, and began to speak much more softly this time:
‘You know… I like you a lot… I like your manner, because you’re very frank. I think we’ll get along just fine.’
‘I hope so, señora.’
My luck was such that, instead of paying me at the end of the month, as was customary, she’d pay me in advance and sometimes with a bonus.

Set in Cuba and Miami, from the 1940s to the present, two Afro-Cuban women narrate their life stories. One leaves a small town in the central part of the island to work as a maid in Havana in prerevolutionary Cuba. The other, her friend's daughter, educated in revolutionary Cuba, leaves Havana in the 1980 Mariel boatlift, to find work as a maid in Miami… A history full circle?

Born in 1943 in Santa Clara, Cuba, Pedro Pérez Sarduy is a poet, writer and journalist, now resident in London. His poetry includes Surrealidad (1967), Cumbite and Other Poems (1990), and Malecón Sigloveinte (2005), and is featured in The Oxford book of Caribbean Verse (2005). He co-edited with Jean Stubbs AfroCuban Voices: On Race and Identity in Contemporary Cuba (University Press of Florida, 2000) and Afro-Cuba: An Anthology of Cuban Writing on Race, Politics and Culture (1993); work in progress includes Journal in Babylon, chronicles on contemporary Britain. In 2008, he was awarded Le Prix du Livre Insular Ouessant for the French version of this novel, Les bonnes de la Havane; and in 2009, he was awarded the UNESCO Victor Hugo medal for his writings, ‘which contribute significantly to the protection and promotion of the rights of man/woman and the oppressed’.