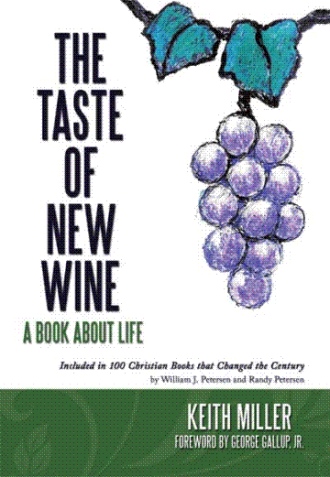 The Taste of New Wine changes lives, challenges indifference, and creates an exciting sense of spiritual adventure. Its message is a breakthrough for honesty, integrity, and openness in our relations with God and with each other.

presents a firsthand, revealing, and unforgettable story of spiritual awakening. With unmitigated frankness, Keith Miller shares the turmoil and discoveries he experienced on his personal pilgrimage of faith. His powerful, life-changing message can spark an exciting flame of spiritual renewal within your own heart.

With a refreshing absence of religious jargon,

The Taste of New Wine shows how we can find the way out of the familiar “me-centered” predicament and move toward a pattern of honesty, integrity and openness in our relationships with God and each other. The author explores the transition from beginning commitment to a fuller and more mature Christ-centered life.

offers helpful insights on studying the Bible, worship, marriage and ways to live out Jesus' teaching about the Kingdom of God in our relationships and work.

Four decades and over two million copies (and translation into 11 languages) later, this contemporary classic still offers a hopeful refreshing direction to its readers.

It was included in the book 100 Christian Books that Changed the Century, by William J. Petersen and Randy Petersen. The Taste of New Wine belongs on every Christian's shelf of staying-power favorites, for it is a rich message, with insights that deserve to be enjoyed again, year after year.

Before becoming a full time writer and lecturer, Keith Miller spent fifteen years in the Oil Exploration business in Texas and Oklahoma, and helped form two independent oil companies. During this time Keith and his wife had three daughters, Leslie Williams, Kristin Huffman, and Mary-Keith Dickinson.

In the early sixties Keith became the founding director of Laity Lodge, and with Howard E. Butt, Jr. developed programs to help business and professional people take their faith into all areas of their lives.

Keith graduated from Oklahoma University, OK with a B.S. degree in Finance. He then studied theology at Berkeley Divinity School in New Haven, CT, and completed a degree in theology at Earlham School of Religion. Keith earned a Master's degree in Psychological counseling from the University of Texas. In 2009, Keith was awarded the Doctor of Humane Letters degree by the Episcopal Theological Seminary of the Southwest.

Keith has worked with other noted Christian leaders including Bruce Larson, Lloyd Ogilvie, Lyman Coleman, Sam Shoemaker and Paul Tournier. He has spoken at several theological seminaries, at the Pentagon, and at National Conferences for several denominations in the U.S., Europe and Asia.

Keith has written or co-authored twenty-four books on Christian living, addictions/codependence, spiritual transformation, devotions, discovering and achieving one's vocational and personal dreams, and business (the entrepreneurial process). More than four and a half million copies of his books are in print and have been translated into as many as twenty-five languages. (Of these books, four have been number one on the religious bookseller's list.)

In 1976 Keith and his wife were divorced. Several years later he remarried Andrea Wells Miller. Keith and Andrea have been married for thirty years and live in Austin, TX.