1960s Decade of Dissent: The Way We Were 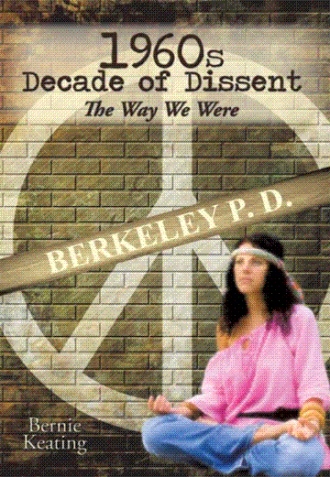 Where is the passion today for a cause -- any cause?  Once there was -- in the 1960s -- but perhaps some went too far.  Ginny, a student at the university in Berkeley, became a terrorist in the violent underground Weatherman Organization.

This is the love story of Ginny and Montana, two students on the U.C. Berkeley campus during the decade when the nation was in turmoil.

Here is how it starts.

"There she was on the late night news:

Ginny Kruger, a member of the Weatherman, who fled underground … surrendered this morning at the FBI office in Oakland …"

" … Montana listened to the TV broadcast.  Even after twenty years in hiding and on the run, she was still a beautiful girl -- his first love.  He turned off the TV, closed his eyes, and thought again to those days at Berkeley."

The story then goes back to their times together when the campus became a battleground.  Newly arrived at the University of California, Montana meets Ginny, who enlists him to join her at a demonstration at the hearing for the House Anti-American Affairs Committee in San Francisco City Hall.  The sit-in becomes a riot.  The entire nation then became a crucible of unrest as virtually all the norms became challenged.  Demonstrations became sit-ins, which became riots, Vietnam anti-war marches were commonplace and underground intrigue grew rampant.  Montana is drawn to Ginny, who has come from a dysfunctional childhood, carrying her emotional scars into the turbulence she finds on campus.  Dissent was in vogue and Berkeley was at the epicenter.

Montana's friends include social misfits, troubled people like himself, scared in a dysfunctional childhood, who drift together in the cause célèbre of the moment.  Val is a psychology graduate student and campus leader of social causes -- and a beatnik.  Robert Gonzaga is a young priest on campus who is drawn into the events while undergoing a struggle with his faith.  Luigi Lazzaro is a vintner in the Central Valley who faces farm worker pickets and students from Berkeley.  All their paths cross with Montana and Ginny in this revolutionary arena.

Montana takes a job in an Oakland glass factory, and losing his student exemption, he joins the California National Guard.  Ginny takes guerilla training in Cuba and joins the seditious, underground Weatherman Organization.  As the conflict escalates, the California National Guard is mobilized under martial law to maintain order on the streets of Berkeley.  Montana is placed in charge of the military forces stationed adjacent to People's Park, and finds himself facing Ginny across the street barricades.

After graduation, Montana gets a personnel job at a glass factory.  The FBI has alerted the plant management that their work force has been infiltrated by a cell of underground revolutionaries.  Ginny is among them.  In a climactic scene, he must decide his allegiance.  After an abortive bank robbery, Ginny flees as a fugitive from the FBI.

The final scene, many years later, finds Montana a successful plant manager, happily married.  Ginny, who is still on the run in hiding, calls and asks for his help to turn herself in.  He makes the arrangements.  Here is the closing scene:

Next morning, as I walk the warehouse aisles, my hi-lift driver friend, Tony, pulled alongside.

"Say Montana, did you see that article about the fugitive who turned herself in?" he asked.

Ginny and are students caught-up in campus turmoil at the of , , during the 1960s nation-wide era of dissent.  It is a story of social misfits, troubled people scared in a dysfunctional childhood who drift together in the cause célèbre of the moment -- and there are plenty of causes for them to find:

Ginny and and their fellow students had all these things on their plate -- on and off campus.  Ginny becomes the activist leader of the violent Weatherman organization and goes underground as a fugitive from the FBI.     Now, fifty years later, it is difficult to believe but many in our nation were engaged in an almost open revolt.  Names of people are fictional, but all the events are exactly as they happened.  I know, because I was there.

This is Bernie Keating's third book after finishing other careers spanning 60 years: