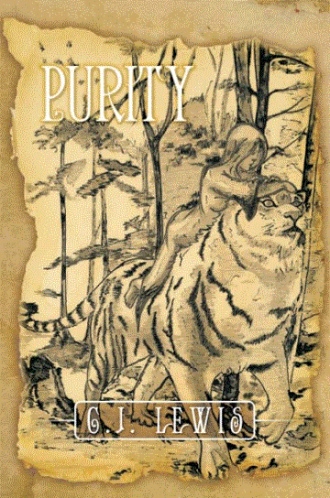 It was in the early evening that her progress was unexpectedly and cruelly halted. As she rounded a small outcrop of rocks, she looked down and stopped in her tracks with a cry of anxiety and surprise. At her feet lay a ravine, not very wide, but very deep. The track had come to an abrupt end. She felt thoroughly downcast. How was she ever going to cross this obstacle? Was all her day’s journey in vain? Would she be forced to retrace her steps all the way to the beginning and start again?

She decided to explore the top of the ravine and to this purpose she moved to her left, but very soon her way was obstructed by a dense copse of thorn bushes. On moving to her right she found the same. In the distance in front of her she could hear the sound of, what she believed to be, a waterfall. However, there was no way of confirming this, since her view was totally obscured by the bushes.

The light was now fading and night was fast approaching. This fact at least prohibited any further decisions and actions on her part for the present. She had no choice but to stay here for the night and to review her situation in the light of day.

She found some shelter under an overhang of the outcrops of rocks where she stowed her meagre possessions. She wrapped herself in a rug and, with a stone to pillow her head, she soon drifted into the deep, dreamless sleep of the just and weary.

As it is with those who have been trained to survive by their wits, she woke suddenly with a clear and wakeful mind. Above her the stars were shining in a clear, cloudless sky, but she hardly noticed them. She knew that something was afoot, but she was uncertain of the cause for her unease. Then she heard it; A faint scratching noise and a mewling as of a kitten. She threw off the rug with which she was covered and quietly rose to her feet. From her store of armoury she selected a particularly fearsome dagger. This was not just an ordinary dagger. It consisted of a central handle grip with a thin, sharp blade at one end and a particularly evil looking spike at the other.

Leaving the shelter of the rocks, she surveyed her surroundings and strained to hear from which direction the disturbance came. She moved to the edge of the ravine and looked down. Far below she espied something brightly gleaming. She soon realised that it was a river, and that the gleam was the reflection of the moon on the smooth surface of the water.

There it was again! That noise! A sound of scratching and a whimper. It was emanating from the other side of the rocky outcrop where she had been reposing.

Clutching her knife she moved around the rocks. At first she could see nothing untoward. A very large stone had become dislodged from the top of the pile of rocks. It had fallen in front of a shallow cave, partially obstructing the entrance. The beams of the moon was shining directly into the cave and reflected in its light against the back wall was crouched the small figure of the young of a silver tiger.

Immediately she realised what must have happened. Very likely the mother had left her kitten to go hunting for food and while she was away the rock had come tumbling down, thus trapping the young tiger. The little creature was too small to climb across the rock. At intervals it would dart forward and scrabble frantically at the obstruction.

With the realisation of what had happened, her blood ran cold. Where was the mother right now? Although she had never seen a live silver tiger, she had heard many tales of their ferocity. It was said that no man would ever confront one of these creatures by himself. She had to get away from this place as soon as possible. But, as she turned to leave, it dawned on her that the mother would be unable to rescue her young. The gap between the top of the fallen rock and the roof of the cave was too narrow. She had no choice in the matter; She had to help the little creature to escape. Until the morning she was effectively trapped on the edge of the ravine and she could not afford to have a dangerous beast prowling about.

In order to free both hands, she

It is a fact that there are only eight notes in an octave and that most western music is derived from different combinations of these eight notes. It is my belief, (to a certain extent at least), that this is also true of stories. Quite often the stories we tell are the result of what we have read, or that which we have experienced, or even the experiences of others. In the mythologies of many races, the fables and myths arose out of the mists of time and I would like to believe that there may just be a grain of truth in all of them.

This tale is based on an old fable. In my opinion it is certain that real-life similar situations took place on which this fable could have been based. (The reader can decide for him or herself which it might be.) The tale is told to a sick teenage girl. It tells of a king who rules over a prosperous city. He has a young and beautiful daughter who is much beloved by all. Due to circumstances she has to flee the city into the wilderness where she has many adventures. A holy man, the oracle, takes it on himself to act as her protector and guardian. It is a story that explores a number of contrasting emotions: Love and hate, envy and generosity, good and evel and, above all, obsession.

The author was born in Africa and came to Britain in the 1970’s where he studied and became a Physiotherapist. In his spare time he studied and received a degree in the arts and literature. For many years he has written short stories and poetry for his own satisfaction. Recently he retired from Physiotherapy and decided to devote himself to full time writing.

Because he is visually impaired, as well as being most keen  on all types of literature, he developed a very active imagination. He consequently writes from a different perspective from that of a sighted person. The stories are therefore more concerned with the emotions and actions of the characters, rather than aesthetics. For example, in this story there is only a cursory description of the fair queen and the dark queen. None of the other characters’ appearances are described. The author does not believe that this lack of aesthetic description impinges in any way on the story since the emotions of the story-teller and the girl, as well as the actions of the other characters are more than sufficient to drive the tale along.