Knights of the Continuum

From the Journal of the Time Builder 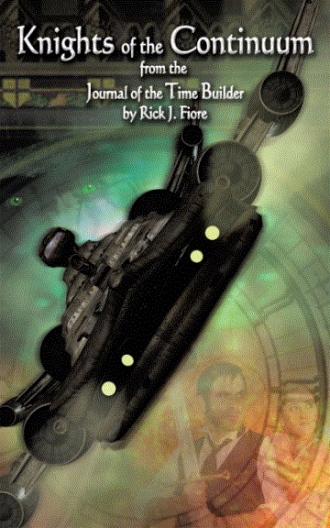 A new alarm started, adding to the plethora of sirens already going off inside the Bridge of the Dodger. Ralph spun around to face his crewmates.

`We've changed course! It's as if we're being pulled by something. We're on a direct path!' He yelled in one electronic breath.

`Again?' Larry exclaimed `Hard to port!' He added. Ralph grabbed a control and thrust it to the left.

`Nothing! Nothing's happening! It doesn't work! Nothing works!' He cried, thumping the dash like a spoilt child.

John and Harry almost fell through the patio doors in their rush to get outside. Suddenly John stopped dead. The servants. John spun round sticking his head through the open door,

`Everybody out now!' he yelled before throwing his glance back at Harry. Doctor Kenner's eyes were fixed upon the lights and a look of absolute wonder spread across his face.

`Rubbish!' Ralph screeched. `This ship is made of rubbish!' he repeated hovering in front of Larry's face. `You!' Ralph hissed, pointing an accusing gloved finger at Blemish. `You built this ship out of rubbish!'

`What are we on a path for?' Larry said shoving the annoying little metal ball, which made up Ralph's entire being, to one side, clearing his field of view.

`Some sort of structure. A building' Ralph whimpered, trying to regain some sort of dignity.

John's servants, Mr. and Mrs. Jennings, along with their son, ran into the gardens of Camelot house, before stopping dead upon seeing two huge lights almost on top of them.

`Jennings, take your wife and son and run like the wind down to the path!' John demanded.

`What about you sir?' Jennings asked gathering his family.

`Never mind me. Now go!' John shouted above the roar of engines and water, his black hair blown into frenzy under the torrent of wind caused by a forward draught from the rotating ship.

`I suppose we stay and see what it is?' Harry bellowed, hardly able to stand in the wind.

`Absolutely' John returned. He was not sure it was a good idea, but now it was too late. As Jennings and his family disappeared over a small grass mound towards the path, John realized he and Harry had run out of time. The Dodger was thundering its way towards them. The two men ran towards the rouge behemoth and threw themselves to the ground as the monstrous visitor from space screeched over their heads bringing with it a tidal wave of water that smashed against the cliff with formidable force dispersing into millions of harmless tears that rained down upon them. The Dodger, however, carried on, missing the top of Camelot house by a hair's breath. Tiles flew from the roof and the top floor windows shattered, showering pieces of glass down upon the grass below. John and Harry watched, with half open eyes, the monster rip through the air and disappear over the house. Then, from nowhere, the slipstream from the ship hit them. Clawing at the ground, John and Harry were only just able to stop themselves from being smashed into trees as the wind blasted past them before slamming into the house taking with it more windows.

`We missed it!' Larry cried `Direct path my rosy red……'

`That wasn't the building we're heading for!' Screamed Ralph, pointing out the window screen towards a house, further along, towards which the Dodger approached at horrendous speed.

Inside the house, Kate's room became bleached by the whirling lights of the oncoming Dodger. Luckily for Kate, the lights were joined by the earth-shattering noise of the ship's engines, which woke her from her slumber. At first she thought it to be day but quickly realized there was something amiss. The next few seconds were a blur. Kate glanced out of the window to see the mass of light and metal hurtling her way. White dots burnt into her eyes, temporarily hindering her vision, as she ran out of the bedroom and onto one of the ornate landings of the doomed house.

Timbers shattered, bricks and masonry showered in every direction as the huge metal underbelly of the Dodger tore through the roof and upper level.

Kate was thrown down a flight of stairs, landing in a heap on the central part of the staircase where it circled round to the next flight. The bedroom in which she had been fell apart as if it were made of matches and the fire Kate had lit earlier dispersed its burning logs around what was left, igniting torn curtains and linen. A sheet of plaster fell from the ceiling above where the unconscious Kate was lying, and lodged itself, thanks to the timbers still attached, between the wall and the banister as scores of slates rained down upon it and the surrounding area. The right wing of the house disintegrated as the Dodger pulled its victim from the place it had stood for a hundred years. The wing of the crumbling mansion crashed to the ground spreading wood, furniture and bricks without mercy. Kate's side of the house still stood, but was left exposing its innards to the night air, which caught the now raging fire, increasing its intensity, whilst the culprit of the damage flew nose first into the forest that lay beyond. The Dodger pushed into the night, smashing through trees like twigs, its stumpy wings slashing trunks, its nose grinding into the earth, carving a trench before finally coming to an ungainly and dishevelled stop.

Inside the ship the bridge was dark, save a few flashing lights. Larry and his companions lay in a crumpled heap upon the floor before, slowly and one by one, they rose. A click alerted them to the fact that the lever that Larry had desperately tried to move had slipped effortlessly into place. Larry shook his head and roared with laughter.

`Wow! Our first crash landing a success' he beamed.

1869: A man is murdered in Westminster Abbey. The weapon used: Excalibur.

1899: John Arthur, the son of the murdered man, needs to find the truth about the death of his Father and claim the sword which still stands proud in the Abbey. It is only with Excalibur that John can unite a fellowship from distant worlds to defeat an enemy that threatens all of humanity.

1969: An American journalist intends to unearth the truth behind the now

famous sword of the Abbey, only to find himself involved as time bends in

upon itself resulting in a huge battle in 60's London.

This book explores the history of John's Father and the mysterious pocket watch bequeathed to him by the equally mysterious wizard.

It takes us through John's understanding of his duty and his relationships with Doctor Harry Kenner, the beautiful Katherine Canaveral, Captain Larry Faygun and Crusifious, the powerful King of Oyrinx.

Join John Arthur on his journey through time, space and enlightenment.

Follow him as he slowly becomes his own hero. A hero only time can create.

Rick J. Fiore was born in1971 in the town of Southend on Sea, Essex, England. Southend sits on the Thames estuary and Rick often stared into the water, knowing that it led to one of the greatest and most fascinating cities on Earth, London. Part of him felt that he should have been born in London and he always felt at home when he visited. To him this vast metropolis was the centre and hub of the entire universe, almost a living thing within itself. This was confirmed when he discovered the works of H. G.Wells, who used London as a backdrop for many of his stories. Wells was a great influence upon Rick and the early concept of The Knights of the Continuum, most notably by The War of the Worlds, The First Men in the Moon (ironically one of Wells's few stories not set in London) and of course, The Time Machine. It was this book, the George Pal film and a certain space saga that began in 1977 that made Rick realise he had his own story to tell.

The Knights of the Continuum is the first of three stories written by Rick, that race back and forth through time linking possible pasts, presents and futures into one incredible tale.