Running With Zoé: A Conversation on the Meaning of Play, Games, and Sport

Including: A Journey to the Canadian Arctic 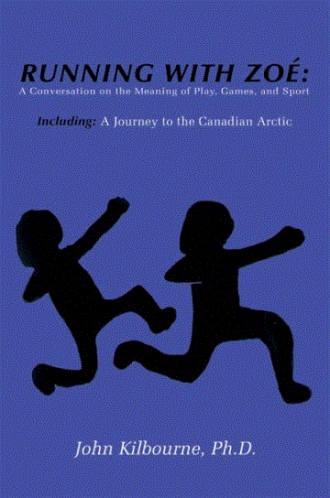 It was an extraordinary day, June 2, 1983.  I was poised on the rear of a large flatbed trailer that was being pulled down in .  Standing next to and around me were several players and their families from the 1983 National Basketball Association World Champion Philadelphia Seventy-Sixers. Other coaches, players and Seventy-Sixer administrative staff were on similar flatbed trailers that preceded and followed ours.  Yes!  I was part of this great basketball team that was celebrating after having reached the Promised Land.

At the beginning of the 1982-83 season I had been hired by the Seventy-Sixers as the first full-time strength and conditioning coach (Dance) in the NBA.  Now, after a successful regular season (65 wins & 17 losses) and a nearly perfect post season, we were the 1983 World Champions of Basketball.

As the parade crept through the heart of rejoicing fans surrounded us.  Some estimates were that as many as one million, five hundred thousand people participated in this tribute.  Broad Street was absolutely wild.  People were literally hanging from the windows of skyscrapers.  Folks of every age group and of mixed ethnicity were waving and screaming with ecstasy.  A few folks actually took their clothes off and were rejoicing naked.  It was unbelievable, to say the least.

It was somewhere during the journey down towards Veterans Stadium that I asked myself, what is this all about?  Just what is this phenomenon we call sport?  And, what has sport done to these folks to cause this many to celebrate in ways never seen, heard, or felt, at any other time or place in my life?

There had been many moments in my life where I thought I had reached the height of human expression and spirit.  As an adolescent I sat with my father and brother at a Doors concert in , and watched Jim Morrison dance and sing in ways unimaginable to a fourteen year old.  As a teenager I witnessed several demonstrations and concerts in the area.  These were the great Peace-Love-Music festivals of the late 1960's and early 1970's, Jimi Hendrix, Janis Joplin, Country Joe and the Fish.  And, as an amateur and professional actor/dancer I had performed on stage, hearing and feeling the cheers of appreciative audiences.  One of my calling to the stage was performing with The American Ballet Theatre in the Ballet Petroucka at the Dorothy Chandler Pavilion in .  Also, in 1980 as Graduate Assistant (Dance Conditioning) to then Head Basketball Coach Larry Brown at U.C.L.A., I was part of a team that went to the N.C.A.A. Final Four Championship in .  As spectacular as all of these life experiences were, none were even close to what I was feeling on this electrifying June morning.  The celebration in was downright orgasmic.  Ecstasy of the highest order.

It was during the Seventy-Sixers’ parade that I began my quest to understand the phenomenon of sport.  This revelation and the ensuing crusade originated more than twenty-five years ago.  During that twenty–five years I have continued sharing information about dance, movement, and conditioning with amateur, college, and professional athletes and teams, worked extensively with American and Canadian figure skaters, and remained active in the theatre and dance arenas.  Most importantly, I have been a devoted game and sport philosopher, thinking about and trying to understand the nature and conduct of humans and their participation in games and sport.  Although much closer than I was twenty-five years ago, I still seek answers to the many questions I have about play, games, and sport.  Running with Zoé, are my reflections at this juncture of the crusade.  The chapters of the book are a progress report on my journey towards an understanding of play, games, and sport.  It is my hope that by sharing my journey you will become closer to understanding the deeper meanings of play, games, and sport.  Our nearness may help bring society into greater harmony with the values that are inherent in the games we play.

Modern sport is one of the most watched, participated in, read about, and listened to events of our time.  This certainty was demonstrated by the fact that nearly one-hundred million Americans watched the Super Bowl in 2009.  Despite sport's popularity, those in sport and those who observe sport know little if anything about the deeper meanings of sport.

I began to ask questions of myself and others about

Running With Zoé shares Dr. Kilbourne’s personal journey to understand the deeper meanings of the games we play.  The journey includes Dr. Kilbourne’s creative and pioneering efforts in dance conditioning with the U.C.L.A.’s men’s basketball team under head coach Larry Brown, his tenure as the first full-time conditioning coach in the National Basketball Association for the 1982-84 Philadelphia Seventy-Sixers (1983 World Champions), his work with Olympic level figure skaters in the United States and Canada, his discoveries in the academic arena about play, dance, games, and sport, and his journey to the Canadian Arctic where he examined the importance of traditional Inuit games.

Most recently Dr. John Ratey author of SPARK:  The Revolutionary New Science of Exercise and the Brain said of Dr. Kilbourne’s writings, “…Your book touched me deeply and made me think that someone who got Moses and Julius to dance together must have had such a strong self-awareness and trust in your mission….”  Of John’s work with basketball players Larry Brown said, “He’s the best in what he does.  The kids love him and have a lot of respect for his knowledge.”

Dr. Kilbourne has devoted nearly all of his adult life to helping individuals know and understand play, dance, games, and sport.  His Bachelor’s degree is in Creative Drama & Movement from California State University Long Beach.  His Master’s degree is from the of at in Dance Education with an emphasis in Dance & Sport.  While at UCLA he served as Graduate Assistant (Basketball Conditioning) to then head coach Larry Brown.  His Ph.D. is from The Ohio State University where he continued his work exploring the relationships between sport and performance.  In 1982 John became the first full-time conditioning coach in the National Basketball Association with the Philadelphia Seventy Sixers.  He helped them in the pursuit of their 1983 World Championship.  In addition to his work in basketball, John has extensive experience in figure skating both in the and .  Presently he serves as a professor in the Department of Movement Science at in .

John is a former member of The Margalit Dance Theatre, The Detroit Dance Collective, and presently co-directs with his wife Elizabeth, The Blau Rhino Dance Ensemble.

Dr. Kilbourne has won numerous awards including, The 2009 GVSU Distinguished Professor of the Year Nomination, The Commonwealth of Massachusetts Citation of Outstanding Performance, the 2004 Bridgewater State College Award for Academic Excellence, and the 2000 Massachusetts Association for Health, Physical Education, Recreation, and Dance Honor Award.

Dr. Kilbourne is a productive scholar having written numerous articles.  He is a frequent guest speaker throughout .  One of his current research interests is on the games of Arctic people.  During the fall of 2001 he and his family moved to the Canadian Arctic where they experienced the culture and games of ’s Inuit.