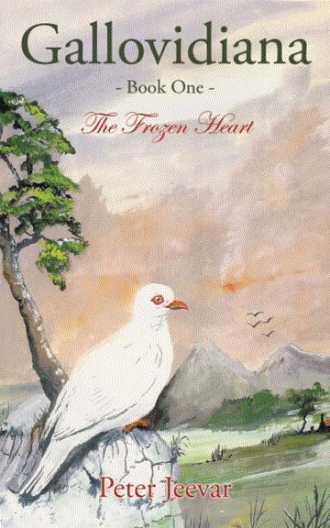 "Morag let a tear fall as she let her mind roam back over the terrible winter.  There was an unseen barrier, not physical like a wooden fence, but it was there all the same, preventing mere Humans from entering the real world of the Wild Ones.  Big Jos Hinterland would have bet a dozen sheep to a cow, had he been a betting man, that that old hare he had seen loping around the farm knew as much about that so-called Fin Ortog as did that cunning little red fox, Tod of the split skull, but they were a 'tight' bunch were the Wild Ones.
Like her husband Jos and the men from the village when they gathered for a friendly craic* down at the smithy, Morag could only say, just as Lassie would in later years:
“Do you mind that tale that went about just after the Big Freeze about that white Snowbird and that old hare-god... Meiden he was called after that big hill out Barlochan way?  That was about the last time we heard anything half true about that beast Fin Ortog the so-called Ice Demon!  Well... I knew Fin Ortog, well slightly... but I do still have that feather the Snowbird gave me – to remind me in case I might forget about him and what he did for me all those years ago!  Trouble is I can't honestly remember what it is I'm supposed to remember about him!!”

Book One of the Gallovidiana series includes THE FROZEN HEART, KIRRUCHTREE and JANEK THE DEMON, which are gripping tales of magic, fantasy and adventure set long ago in the fictional land of Gallovidia when the old gods were leaving to make room for superstitious humans.

THE FROZEN HEART is about a young girl who falls in love with a handsome young man who turns out to be the villain of the piece.  Ortog the Ice Demon freezes the girl’s heart and carries her off to his ice palace.  She is saved by Sakabtu the legendary Snowbird, a few caring Wild Ones and the Master.

KIRRUCHTREE is a forest of fear which 10 year-old Lisa and her grandfather come to when travelling down the long dangerous road to Gallovidia.  The villain in this story is Old Targ the grey forest wolf, and the hero arrives in the form of the magical Lunbatu the Moonbird.

JANEK THE DEMON is the last tale in this collection about a baby boy who is taken by a she-wolf named Tar-Khani.  The she-wolf brings up baby Janek who grows to become leader of the pack.  Janek comes face-to-face with two youngsters from the village who raise the alarm that there is a demon in the Forest.

Peter Jeevar is 82 years old and lives in Balmaclellan in Castle Douglas in South West Scotland.  Peter has been writing, painting and illustrating for many years.  He published two small volumes of poetry, one about Galloway folklore, and also published many articles in newspapers from the 1950s to 1970s.  Peter served in WWII with the Glasgow Highlanders in Germany, and later worked as clerk recorder at the US Military Cemetery in Madingley.

Peter has also written THE GYPSIES and THE SILKEN HAT which form part of Book Two of the Gallovidiana series.  Other titles in this series include THE SOLDIER’S TALE, A GIFT FOR A GIFT, THE STORM, THE BLACK DOG and TRAIL OF FEATHERS.