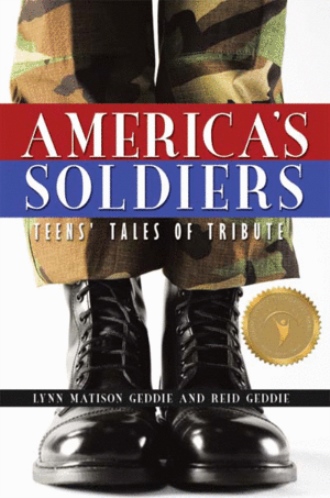 (PREFACE) Deep in the hearts of many Americans, there is a special place of honor where we record the sacrifice and great courage bestowed upon us by our soldiers and veterans- the, men and women of all military branches and rank, who have made an impact on the lives of others through their actions. The stories in this book, written by American teens, provide us with a clear understanding and rich resource of individual soldier’s roles that reside in that place of honor. In total, these stories represent every American soldier. But this is not a book about the glorification of war or expansionism on the part of one country over another. Rather, it is a collection of stories about tribute and inspiration made possible by the American Veteran Project.

You could compare these stories to a patchwork quilt of many colors. Each story represents a patch in the quilt of America, depicting an individual soldier’s contribution and how his or her life represents a commitment to their fellow citizens. America’s soldiers have given the ultimate gift: their service to protect the right to freedom of all people, which included risking life and limb. Having chosen to serve our country, they are by nature humanitarians. Through learning how soldiers have served in war and what has happened as a result of their service, we discover the true meaning of valor, dedication to duty, and strength of character.  By following the paths in their lives through these stories we can better understand the true meaning of sacrifice. As knowledge is gained through their experiences, we in turn share in their journey and are guided by the examples they have set for us.

The inspiration for this unique collection of stories was born through a quest by my son and me to know more about my father’s role as a World War II pilot in the China- Burma- India (CBI) Theater of Operations. How was I to answer an inquisitive thirteen-year-old’s questions regarding the military role of the grandfather he never knew?   The only knowledge I had consisted of my foggy childhood memories of stories once told about a war which ended a long time ago. My father never spoke in specifics regarding his assignments or achievements in the CBI, also referred to as the Forgotten Theater. I surmise he assumed that period in his life was a duty that he and the other veterans from his generation carried out; they did not question the call for sacrifice.  Our country needed help, and they were there to give it.

As Reid, my son, began to show an interest in aviation, the questions and the need to know more about his grandfather arrived.  My father passed away before his only grandchild was born, and all of his war memories went with him. Compared to a thief in the night which vanishes with prized possessions of an unaware victim, I too was robbed of the luxury of reviewing my father’s personal effects from the war. Many mysteries came to light with my son’s questions. It seemed ages had gone by since I had been told about those years in the CBI and the pilot, one among many who found themselves halfway around the world in exotic countries, mere teenagers or

Here is an inspiring and poignant collection of teen essays, depicting individual stories of the courage and humanitarianism demonstrated by soldiers who served from World War II through the conflicts in the Middle East. These engaging stories illustrate how American soldiers, driven by perseverance and a spirit of patriotism, have provided our country with over 200 years of freedom and prosperity. Experience the tragedy of WWII pilot Lt. Norman J. Rogers, whose B-24 and crew went down over Germany and the massacre that unfolded. Observe how the victorious Tuskegee Airmen and one of their fighter pilots, Lt. William M. Wheeler proved their superior aerial abilities while faced with discrimination and segregation in the military. Find out about flying the Hump in the 'Forgotten Theater' of WWII. Learn what it was like for Marine Sergeant, Leroy Caughey to survive a rocket attack on his barracks in Vietnam. Read the stirring memorial to Captain Benjamin Sklaver, U.S. Army reserve officer killed by a suicide bomber in Afghanistan. These are some of the remarkable stories featured and the history about those who lived it. Interwoven in the essays, are the younger generation's (the young writers') introspective reasons why they chose to honor these heroes.

Born into the Baby Boomer generation, Lynn Geddie is the daughter of a WWII ‘Hump’ pilot. She graduated from the University of New Mexico with a Bachelor of University Studies degree and completed Art Education courses at the University of Southern Mississippi. A former educator and artist, her award winning art work has been featured in numerous newspapers and magazines. One of her painting workshops was filmed in a short documentary produced by Louisiana Public Broadcasting.

Reid Geddie, a Georgia middle school student in the gifted program has received awards three consecutive years on his science fair projects. The essay he authored in this book came from his interest in aviation and a need to know more about his grandfather, a WWII pilot. Currently he is working on his solo pilot's license and is an avid fan of historic weaponry.

Mother and son are the sponsors of the American Veteran Essay Project. They live with husband / father Brent and their bull terrier, Scooter, in Metro Atlanta.