The End of Emily West 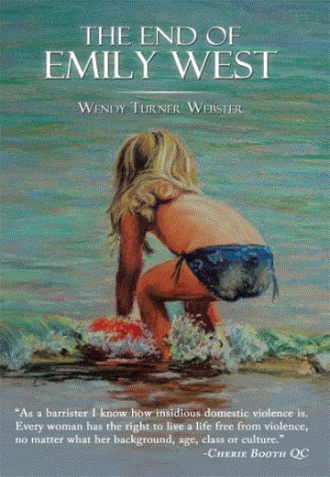 Davina walked home slowly, going over all the different ways she might break the news. God, what if he wanted her to get rid of it, have an abortion? It was unthinkable. After all, this could be the making of them, couldn’t it? This would really cement their relationship… a baby may really soften Darren up… calm him down, even. As Davina turned the corner into their road she suddenly had a rosy image of herself being treated like a goddess, a princess; a precious vessel holding priceless jewels. She felt older and wiser now too. Her friends may want to go out every night and get blind drunk, wake up in an unfamiliar bed with a head full of aches and regrets. But her new life would be a world apart from that kind of childish, immature behaviour. They would be a family… a proper family with real commitment. As soon as Davina entered their house and closed the door behind her she knew this would not be a good time to break the news of her condition to Darren. She could already sense the tension in the atmosphere. Some houses or homes oozed love and warmth or at least a sense of peace and quiet when you entered them. Darren’s house, on the other hand, was one of those that could make you feel distinctly uncomfortable the very moment you stepped inside and Davina’s stomach lurched as she felt her skin prickle with the anticipation of conflict. “Oh, fucking hell!” Darren’s curse came loud and clear from the living room, confirming Davina’s prediction. Davina tried to creep upstairs but Darren had already heard the front door bang closed. “Get me a whiskey will you? And you might start some tea while you’re at it – I’m frigging starving. Where the hell have you been anyway?” Davina hesitated before walking into the living room and lying, “Only up to the shops.” “So where are the bags? Where’s the shopping?” “Oh, well… I didn’t end up buying anything.” “Bloody hell! I’m working my balls off here while you swan off up to the shops and then can’t even be arsed to bring back a pack of cigarettes. I told you we were running low. There’s no milk in the fucking fridge either. I’ll just work every hour God sends and trot down to the shops shall I?” “I work too…” “Work?! You call what you do work? Christ, someone should have you arrested under the Trade Descriptions Act!” He made a gesture to encompass all of his study books and papers laid out on the table. “This is work! Having you as a fucking girlfriend is work!” Davina cried and stumbled into the kitchen, determined to rustle up something quickly to try and appeal to Darren’s stomach and put him in a better mood. All this stress he was under… making him say all these cruel things. His finals couldn’t come quick enough for Davina. Then they could really start to live properly, really start to prepare for the baby. On a tray Davina placed a glass of whiskey and ginger with ice alongside a plate heaped with toast, spaghetti in tomato sauce and two fried eggs. She picked it up, held her head high and walked in to the living room where Darren was still pouring over his studies. She kicked open the door with her foot. “Darren, some food…” “Not now,” he muttered, “I’m just working out the last bit of this formula.” “Well, I’ll just leave it here…” Davina made to cross the room to put the tray down on the coffee table but before she had barely taken a step one of Darren’s largest and heaviest physics text books had struck her on the side of the head. He roared and leapt up out of his chair as the hardback found its mark. “You stupid bitch! I was trying to concentrate!” The tray and all that it carried fell to the floor. Darren’s training shoes mashed the spaghetti and eggs into the carpet as he reached out for Davina’s hair and yanked her head backwards, all the time screaming out like a wounded animal. Davina fell back against the wall and he was still gripping her hair as they slid together to the floor. Darren’s eyes were glazed and his screams turned to sobs of rage and self pity. “All this work… I’m under so much pressure… so much fucking pressure…” Davina eyes were closed as she whimpered over and over again, “Please don’t hurt me Darren. I love you. Please don’t hurt me or the baby…” On and on she feverishly whispered the words until she felt Darren’s grip on her hair suddenly loosen. He gripped her face with both hands and his wild eyes bored into hers. “Oh God, I’m so sorry… what have I done? Please forgive me. I’m so sorry. I’m so sorry. I love you. Don’t leave me. Don’t take the baby away. I’m begging you, Davina, not to take my baby away. I’m so sorry.” They lay there for some time, amongst the toast and the eggs and the ice cubes, allowing the tomato sauce of the spaghetti to stain their clothes, oblivious to the whiskey and ginger that was soaking though to their skin. Because of Darren’s assurances Davina grew increasingly confident that she had just witnessed a side of him that she would never see again. And when he drew himself up onto one knee and asked her to marry him, she thought that all her troubles were over.

Emily West's idyllic childhood is shattered when her young brother, Bobby, dies from meningitis. Her wish to escape to a more exciting, adventurous life seems to be granted when, at the age of eighteen, she meets Darren O'Dowel. Fifteen years her senior and with a job at the local radio station he appears to offer a sophisticated and glamorous existence... the reality is anything but. Darren is controlling, domineering, abusive and violent and leads her into a dark and degrading world of drink, drugs and sexual exploitation. Only when she eventually extracts herself from this destructive relationship can her life start afresh. But Darren O'Dowel does not forgive or forget. He blames her for his downturn in fortune and he wants revenge. He believes that Emily West has ruined his life... now he will try to ruin hers. (50% of the royalties from this book will go to the domestic violence charity REFUGE)

Wendy Turner Webster is best know for presenting the hit TV show PET RESCUE. She is married to actor Gary Webster and they live in West London with their two small boys, Jack and Freddie. Wendy has drawn on her own experiences of domestic violence during her first marriage to write the relevant scenes in The End of Emily West.