What Am I Doing Here?

True Adventures While Surviving 1172 Days In The U.S. Army During WWII 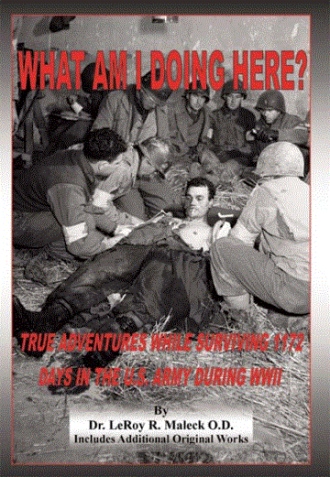 Captain Robie studied my face for a moment and said, "Lee, you look like hell, I guess you need some sleep. Why don't you get in the back seat of my jeep, and ride instead of walking, maybe you can get some sleep."  I said, "Thanks", and quickly got into the back seat on the right side of "Pops"  Mc Mahon, our clerk.

"Pops" was 40 years old, to us youngsters he was a stabilizing factor.  He had very bad knees, and couldn't walk very far so he always rode.  We were soon going to lose him, as the Army was recalling and releasing all soldiers over 38 years old.

As we sat there, our medics were given their marching order, and those not in our jeeps walked onto the blacktop road.  But before our Sergeant left for the road, he leaned over to me and almost whispering, said,   "Maleck, you are now a three striper, and have men under you, and it wouldn't look good if you rode when they didn't. They too, didn't get much sleep, what do you think?"

I agreed and quickly left the jeep to join my guys that were about a hundred yards up the road, walking behind a large slow moving truck.  Just as I had about reached them, there was a monstrous explosion behind me that almost blew us down!  Quickly turning around, I saw a bunch of debris high in the air above the trees.  It was our medical chests, blankets and litters.!

Running back, we were all shocked to see that our medic jeep and trailer had been blown up by a very powerful mine.  We first came upon our driver, Aldo Funari, lying face down on side of the road about 30 feet from the wrecked vehicles. The front portion of the jeep was well beyond him.  He was still alive, but his back was broken.  Captain Robie had been torn in two, at the waist.  "Pops" Mc Mahon was nowhere to be seen.  We left the road to search for him.  The rear half of the jeep where he sat was missing, suddenly chills shuddered throughout my body, as I realized that only moments ago I was sitting along side of ‘Pops’ and would not be here and alive if Sergeant Lawrence Miller hadn't spoken to me about keeping a good relationship with my men. Sergeant Miller, wherever you are today, again I give my “Thanks”.

Somebody found "Pops" remains, about 75 feet from the road.  His right leg below the knee was missing.  When we put him on a litter to bring him to the roadside, his body was like a bag of jello, as almost every bone in his body had been crushed or broken.

We started a search for his leg, but soon gave it up when one medic spotted more trip wires and "booby" traps.  "Pops" didn't need his leg now.

These Germans were devilishly clever, knowing that blowing up a vehicle, with that large mine would cause casualties, and force advancing forces off the road and into these mined and "booby" trapped areas to cause more deaths and casualties.

The strangest thing about this incident was that the mine that destroyed our jeep and trailer and killed three men was buried under a paved blacktop road.  Our mine sweeping troops never detected this mine.

WHAT AM I DOING HERE? by Dr. LeRoy Maleck O.D. is  Book III and potentially the most moving of his life experiences.  This book contains the recollections of that time in life when a 22 year old army combat infantry medic was forced to rapidly mature and change forever. The author’s first person style and account clearly comes from being there.

This book chronicles his entry into the army as seen by a new recruit.  The true account continues through basic training, continued training and the introduction to army life and situations that seem as a satire and have humorous   moments.

Follow his journey with the 137th Infantry Regiment, aboard a troop ship to England.

Then in early July, D Day + 28 Days, his Regiment is on Omaha Beach.  Roughly 11 days later he, with his unit is engaged in something his training could not prepare him for, combat with a determined, entrenched enemy.

Follow the exploits of war through the eyes of a combat infantry medic who went through, survived, and helped others survive. of some of the most brutal battles faced by the U.S. Army in World War II, Including the Northern France Campaign and the Battle of the Bulge.

In addition to an army combat medic’s first person account of his participation in World War II, the author has included a story about a rather amazing four legged friend, Speed.

Speed was his Uncle Bill’s dog, companion, and often hunting partner.  In contrast to the War chronicles you may find this amazing heartwarming and just a great story about a truly amazing dog.