Listen To The Music 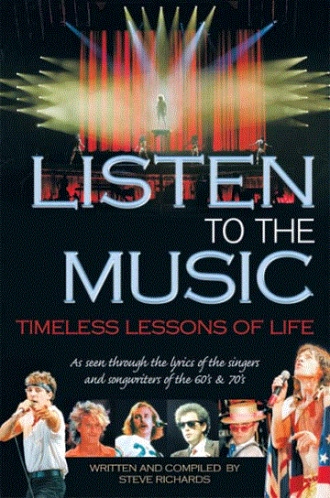 “Some things never seem to last

Ain't it funny how we missed the past”

(Elton John ~ Where Have All the Good Times Gone)

The music of the 60’s and 70’s reflects the turbulent events of two decades marked by unprecedented social, political, and economic change.  The complex challenges Americans faced in the 60’s and 70’s are strikingly similar to the times we find ourselves in today.  Unlike then, today’s pop artists do not speak to the significant issues shaping the world around us, including an unpopular two-front war, an economy in crisis, climate change and divisive social issues. Attracting tabloid and media attention by what an artist is wearing or with whom they are seen seems more important to the artist than their music.  The MySpace, Twitter, Facebook, Instant Messaging, iPod (not that I don’t have three!) generation is looking for entertainment that is visually stimulating and immediately accessible.  With You-Tube and streaming videos to your laptop or iPod, Gen-Y’ers and “Millenials” are more entertained by what they see than by what they hear.  For those reasons, today’s singers and songwriters focus more on style than on substance because that’s what sells music and draws young fans to concerts.

Most singers and songwriters of the 60’s and 70’s were born during or just after World War II.  As such, they were on the leading edge of the Baby Boomer generation. They were raised by parents born during the Great Depression who, because of their experiences, taught their children to be independent, self-reliant, free thinkers which profoundly influenced their music. These artists vividly expressed through their music what people were experiencing during those turbulent times.  Raw emotions of love, anger, fear, frustration and hopes and dreams for peace and a better world were common themes in the lyrics of the music of the 60’s & 70’s.

The first Baby Boomers graduated from high school in 1964 while the last Boomers entered high school in 1978.  Growing up, Boomers danced to the music, studied to the music (or at least tried to), and listened to the music at work or in their cars.  In the 60’s, we were busy “exploring life”, skipping class or trying to find a date for the next fraternity party.  Blame it on youthful exuberance, a short attention span, or other distractions: while we listened to the music, we seldom heard the words to our favorite songs.  Many of us are now at a point in our lives where we have the time, the patience, and, most importantly, the perspective to truly appreciate the wit, wisdom, and touch of philosophy within the lyrics of many of our favorite songs.  Indulging in a bit of retrospect on our younger years is OK.  But this is not easy for those of us who came of age in the 60’s and 70’s.  After all, we are a Type A generation of work-a-holic planners, doers, and overachievers.

But this book is not written for the Boomers (although they may find deeper meaning in the lyrics since they grew up during these times) because the music of the 60’s and 70’s is as popular today as it was 40 years ago.  This is clearly evident by the fact that an eclectic mix of teens, Gen Y’ers, Gen X’ers and yes, even grey haired Boomers are attending record-breaking concerts by artists like the Eagles, Rolling Stones, Tina Turner, Elton John, Billy Joel, Rod Stewart, and Jimmy Buffett.

Music is an integral part of our everyday lives but while we listen, we seldom hear the music.  If you really listen to your favorite classic rock songs, you will find that they may tell a story, offer a thought-provoking message, inspire or spark the imagination.  Listen to the Music reveals the overlooked messages hidden within the music of the 60’s & 70’s – messages that provide us with Timeless Lessons of Life.

The book spotlights over 1100 excerpts from the lyrics of 750 songs written by 160 artists who launched their careers in the 60’s & 70’s.  The music of this era reflects the turbulent events of two decades marked by unprecedented social, political, and economic change. Artists expressed through their music and lyrics what people were feeling during those turbulent times – love, anger, fear, frustration and hopes & dreams for peace and a better world.  The complex challenges Americans faced in the 60’s and 70’s are strikingly similar to the times we find ourselves in today and the reader will discover that the messages hidden within the music of the 60’s & 70’s remain as relevant as they were 40 years ago.

Life unfolds in much the same way for all of us.  We grow up, fall in love, raise a family, live our everyday lives, cope with unexpected challenges and we grow wiser (not older)!  Relevant lyric quotes can be found in chapters that correspond to one of these six stages of life. Through the captivating messages contained within the lyrics of the music of the 60’s and 70’s, the book shows how music affects our lives in ways we don’t fully realize or understand.

Go to www.ListenToTheMusicLyrics.com to hear some great music and to see photos of some of your favorite 60’ & 70’s artists!

As the son of a career Air Force officer, grew up in , , , , and   Upon graduating from The Ohio State University, he entered the United States Air Force and completed a highly successful 27 year career retiring in 1995 as a Colonel.  Following retirement from the Air Force, Colonel Richards moved to , where he managed one of the most prestigious country clubs in .  Steve is currently the President of Strategic Edge 360, an international consulting company specializing in strategic planning and leadership & management development for Olympic sports and non-profits.

Steve has been actively involved in Olympic Sports for over 40 years first as an athlete and later serving eight years on the Board of Directors of the United States Olympic Committee.  He has been President of two Olympic Sports Organizations – Shooting and Pentathlon and was a member of the 2004 United States Olympic Team in .  Steve’s other passions include windsurfing, mountain biking, hiking, and adventure travel.

His wife Susann is a professional educator having taught in both private and public schools for over 30 years.  They have two married children.  Their daughter served in the Air Force for 12 years as a Flight Test Engineer at Edwards Air Force Base before moving to private industry.  Their son is an Air Force officer and fighter pilot who is currently an instructor pilot in the Air Force’s newest fighter the F-22.

This book results from Steve’s 40-year passion for the music that he and 78 million other Baby Boomers grew up with. Twenty-five years ago, Harry Chapin’s song “Cat’s in the Cradle” had a profound impact on him as a father and husband and his book describes in personal terms how music has impacted his life.