Breach of a Sacred Trust 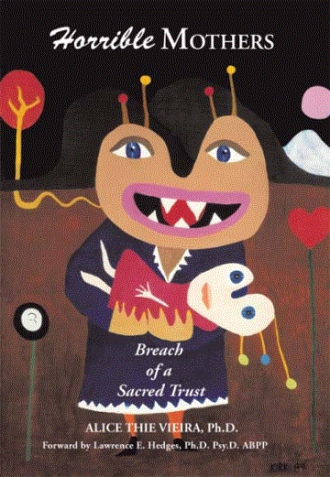 This seemingly simple but truly complex question” True or false: “My mother was a good woman.” This item has appeared in one form or another on countless psychological inventories over the years. The culturally-prescribed answer is, of course, “True.” Even the people most abused by their mothers tend to rise to defend "Mom." The rationale varies: “She was basically good”; “She was never cut out to have children”; “She simply had no idea how to be there for me"; “Perhaps if she hadn’t had me…”; “Maybe it was I who turned her into a bad mother?”

As early as 1954 in his work with abused children, psychoanalyst Ronald Fairbairn observed that a child acknowledging to herself or anyone else that she had a bad mother or that her mother was a bad woman was tantamount to admitting that the child was, by association, a bad person --and so it becomes an act of self-preservation to hold that one's mopther is good, never mind all evidence to the contrary.

In Horrible Mothers, pshychotherapist Alice Thie Vieira takes us into the world of individuals who have endured devastating damage at the hands of society's most sacrosanst icon: the Mother.

Vieira does so with four chief aims:

1. to label abuse so as to be able to acknowledge it;

2. to recognize that the sanctification of motherhood is a burden that society has foisted upon them;

3. to help mothers understand how their mothering may have hurt their children;

4. to help victims of horrible mothering grasp the unfairness of what was done to them, to comprehend how it affected their lives, and acknowledge what they have endured so as to break free from unhealthy attachments to their inadequate mothers, and thus move forward and better realize their potentiality.

Alice Thie Vieira is a practicing marriage and family therapist and clinical psychologist, working with adolescents, adults and couples. She was a high-school teacher, counselor, dean of girls, vice principal in charge of counseling and guidance and  principal of one of the most prestigious girl’s high schools in the . She taught at of , supervising upcoming counselors. She also hosted a radio show on KUCI, Psych Talk , for over five years, during which issues and struggles of daily life were discussed on a weekly basis. Maximizing potential by removing barriers that inhibit happy and successfu lives is her goal in all the work she does.