The Dynamics of Decaying Civilizations from Ancient Greece to America 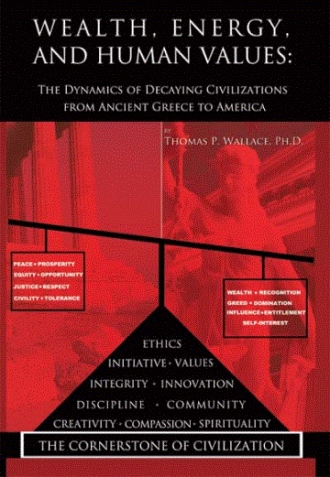 The Inevitable Exhaustion of Civilizations “The two greatest problems in history are how to account for the rise of Rome, and how to account for her fall”. J. S. Reid “We may come nearer to understanding them if we remember that the fall of Rome, like her rise, had not one cause but many, and was not an event but a process spread over 300 years”. Will Durant The degradation of the modern American culture, including its 2008 financial and economic crisis, and the modern rejuvenation of Asian cultures are best understood within the context of 4,000 years of human history and the lessons of failed civilizations. Such are the consequences of the dynamics of societal growth, stagnation, and deterioration, responding to the cultural variables of wealth, energy, and human values and behavior. The concept that all civilizations inherently and inevitably face deterioration and collapse is an unsettling, complex notion for most people to seriously contemplate. Nevertheless, prominent historians and social thinkers of the 20th century acknowledge the reality of this unexplained human experience that has occurred many times over the last four thousand years. The Greek poets Homer and Hesiod viewed history as a regressive process from the golden age through the bronze and iron ages. But, perhaps the most impressive and recognized analyses are the extensive works of Oswald Spengler, Arnold Toynbee, A. L. Kroeber, and Pitirin Sorokin who trace the socio-cultural development of primitive societies through their mature civilization stage leading to cultural deterioration and stagnation. Models, concepts, and theories have been proposed relative to the historic cultural degradation of past great civilizations. Many factors and variables have been identified and analyzed that influence social, economic, and political systems, contributing to mankind’s existence within the framework of a social order. However, a complete, unified theory that satisfactorily accounts for the accepted historical signature pattern or periodic fluctuations of cultural growth, decay, and stagnation has remained elusive. This elusiveness of a unified concept of human societal development has been due to the absence of a science-based, multi-disciplinary perspective that incorporates the disciplines of history, economics, and sociology. The civilization studies literature does not appropriately incorporated scientific definitions and principles pertaining to the consumption of societal wealth and available energy resources. Specifically, the science of energy consumption or transfer, i.e., thermodynamics, regulates mankind’s acquisition, refinement, and utilization of Mother Nature’s resources to provide the food and fuels necessary for the vital processes of human existence. Thus, the much-respected sociological and historical analyses of human behavior and events associated with cultural development have neglected the primary role of wealth-energy resources and the fundamental influences of basic science, while often utilizing scientific methodologies. The long sought unified theory of cultural growth and decay must strictly and rigorously integrate scientifically defined concepts and parameters of wealth and energy into socio-economic processes. Additionally, the ultimate success of a civilization is influenced by the randomness and probabilities associated with the activities of nature and mankind. It will be demonstrated that mankind’s socio-economic aspirations and accomplishments, while fundamentally influenced by human values and behavior, will be restricted and controlled by the availability and effective utility of wealth and energy resources. Typically, inadequate resources have inspired and precipitated negative human behavior of both the rulers and the ruled, particularly as mature civilizations evolve into the phases of cultural deterioration and stagnation. While adequate wealth-energy resources may appear to be an obvious prerequisite for cultural advancement, thermodynamic principles and applications have been excluded from the most respected analyses of socio-cultural development and transitions. Clearly, the science governing energy consumption associated with the nourishment of mankind and the fueling of machines is also applicable to the vital processes of a social order’s existence. This science is the key to comprehending the inevitable exhaustion of civilizations as well as to potential socio-economic rejuvenation. The normal operational mechanisms and energetics of cultural existence and advancement, e.g., economic systems, generate undesirable contaminates or societal consequences that constitute an accumulating internal resistance toward human progress that gradually reduces the rate of cultural growth. Such undesirable cultural by-products of socio-economic advancement include escalating societal complexities, disorder, pollution, and conflict as well as bureaucratic ineffectiveness and expense. These dysfunctional cultural ramifications are a predictable consequence of the second law of thermodynamics, a societal entropy concept, which mandates the spontaneous direction of all processes of nature and mankind and the generation of greater cultural complexity and disorder. Mankind’s actions, whether controlling the fate of an automobile battery or pursuing cultural advancement, will consume wealth-energy resources and employ human values, but Mother Nature’s scientific principles will limit and direct outcomes and produce consequences. The mechanistic-thermodynamic paradigm is a controlling principle for thermodynamic systems, including the organization and function of mankind’s social order as well as the operation of an automobile battery. The “inevitability exhaustion of civilizations” has become quite visible in the first decade of the 21st century as the world witnesses perhaps the most revealing and significant evidence of American society’s self-destructive journey of cultura

The degradation of the modern American culture, including its 2008 financial and economic crisis, and the modern rejuvenation of Asian cultures are best understood within the context of 4,000 years of human history. Such are the consequences of the dynamics of cultural change, responding to societal variables of wealth, energy, and human values. This work provides a unique and formidable science-based framework for civilization development that complements and enhances the work of preeminent historians and sociologists. Accordingly, the foundation for societal progress is placed on restrictive scientific definitions, principles, and concepts of energy and wealth consumption, rather than solely on behavioral perspectives derived from empirical data and historical events. Society’s dynamic forces are linked to the cultural deterioration and collapse of Ancient Greece and Rome, Imperial Spain, and Great Britain. Specific chapters are devoted to stagnation of Western civilization, Asian and Islamic resurgence, deterioration of the American culture, and ecological degradation of North America’s largest estuary, the Chesapeake Bay; collateral damage of socio-economic profitability. The characteristics of America’s current cultural deterioration parallel those of previous great civilizations. These include abuse of wealth and energy resources; excessive individual and national debt; lack of cultural civility, discipline, integrity, and ethics; unaffordable militarism, escalating income and wealth disparities; unresolved crises in health care and public education; and stultifying cultural complexity and bureaucracy. Themes include the underlying principles responsible for the eventual deterioration of all known civilizations; the basis for the recurring, sequential periodicity of civilization success and failure; and the roles and significance of militarism and religion in civilization growth, decay, and rebirth; Addressing these themes necessitates the integration of the academic disciplines of history, sociology, economics, and science, reflecting human nature and socioeconomic and political realities that fundamentally and continuously alter human values, priorities, and behavior, thus creating human history.

Dr Wallace, a physical chemist, has taught undergraduate and graduate courses in chemical thermodynamics and kinetics and polymer science. His research publications have appeared in the Journal of Physical Chemistry, Journal of Polymer Science, Applied Optics, Journal of Colloid and Interface Science, and Journal of Applied Physics. Additionally, he has served in various university administrative positions including the presidency of .