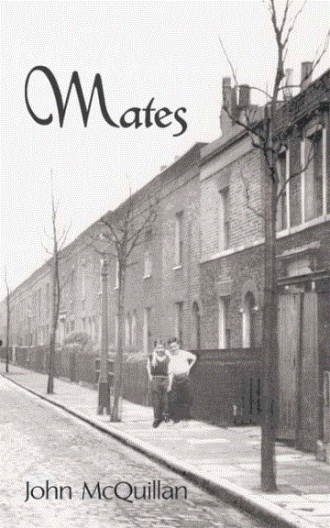 Dick stopped in his tracks. Without lighting the gas under the kettle, he turned, retraced the half dozen or so steps to the back room and stood in the doorway. “Hang on, you say she knows us?”

“I don’t think you would know her, but I met her a few times. She lived round the corner from us in Harper Road. She was a relative of the Cooper’s - a big woman.”

Dick came back into the room and sat down again. “What did you say……what did she say, when you realised you knew each other?”

“She recognised me straight away,” said Martha, “but she meant nothing to me until she started to speak – then I remembered her.”

“Did she say anything about….?”

“Straight away - straight away she said what an awful business it all was and how she often wondered where we moved to. Dick, how can we stay here with her living across the street?”

“Did she say anything else?”

“I didn’t give her much of a chance. I told her what’s past is past and that’s how we’d like to keep it, and would she please not mention it to anyone as we didn’t want it getting back to Alec.”

“Do you think she will tell anyone?”

“Yes I do,” answered Martha. “I never did like the woman; she was always gossiping. I’m sure she’ll be bursting to tell someone.”

“You don’t know that – she might not. She’s got kids hasn’t she?  I saw a couple over there at the weekend.”

“She’s got a boy, Danny, about the same age as our Alec and a girl, Jean, about a year younger I think.”

“I can’t believe she would go out of her way to hurt a boy of Alec’s age. Surely she wouldn’t wish it on her own son if the boot was on the other foot?”

“I just don’t trust the woman, Dick. I thought after 5 years we could put it all behind us, but it’s never going to go away, is it?”

Set in London between 1947-1966, the story follows the relationship between two boyhood friends, Alec and Pete. Pete, the elder by one year, is outgoing, strong and confident and always looks out for Alec who is the brighter of the two but quieter, weaker and somewhat shy.  Alec discovers a horrifying truth about his family that leaves him devastated. The boys are inseparable but are involved in an incident that changes their relationship completely. Whilst following Alec and Pete from the ages of 8 and 9 we also learn of their families, friends and romances through to their twenties.

John McQuillan lives in West Sussex, England.  John was born and grew up in South East London. He left grammar school at 16 to become an apprentice sign writer for 5 years, then started his own sign business at age 23. John retired from business at the end of 2006 after 44 years. Besides family, friends and writing, his other interests include the cinema, radio drama, music, swimming, walking and going to the gym as well as using his imagination and design skills to produce greetings cards, CD/DVD covers etc.  John has also written a number of children’s stories.