WILL YOU TAKE THE DOGS OR THE DIAMONDS? 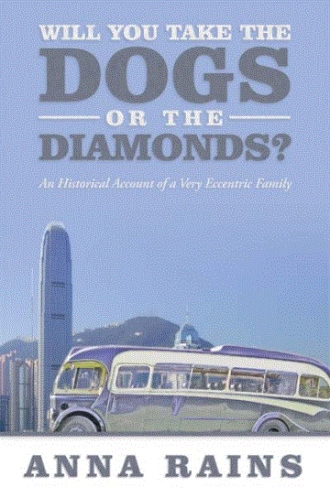 My grandmother went out of the way to get herself noticed.  She always had Rolls Royce’s until the chauffeur retired, but would not drive very far in them as she was inclined to car sickness.  On one occasion when the family was heading by train for Eastbourne for the summer, they arranged for the Inverness to train to stop at Dunkeld – you could do that in those days!  The chauffeur, George, drove them to the station where he assisted with the luggage.  My grandmother waited until people put their heads out the carriage windows to see why they were making an unscheduled stop and drawing herself up to her five foot height said in an imperious voice, “George, meet us in Eastbourne,” where upon poor George had to drive like a maniac to get there before them!

It was upon the retirement of her chauffeur that my grandmother, at the age of sixty-five learnt to drive and went everywhere at 70 miles per hour!  Of course she never took a test as it wasn’t necessary in those days.

On another famous occasion the family had taken two of the small first class compartments trains used to have and my grandmother, while standing on the platform in front of the audience of fellow travellers leaning out of the carriage windows, turned to my grandfather and asked in a very loud voice, “David, will you take the dogs or the diamonds?”  Needless to say he got the dogs – pugs, my grandmother always had several.

My eccentric grandmother also loved seeing the reaction of gentlemen wearing kilts.  She would happily sit stirring her hot cup of tea or coffee until the spoon was red hot and then casually lean over, as if she was about to say something confidential, and place the hot spoon on the bare knee of the kilted gentleman and then roar with laughter when he jumped.

During one of their summer holidays in , my grandmother was standing outside the Grand Hotel saying goodbye to some friends when her knickers fell down.  Without batting an eyelid, she simply stepped out of them and waved them to her departing friends!

That may have been one of the last times she went to the Grand.  While walking past the back of the hotel, she happened to glance down into the kitchen area.  She was appalled to see a rather scruffy looking man, whose job was obviously to butter bread for afternoon tea.  The weather was cool and the butter cold and he was finding it hard to smoothly butter the bread, and so she watched him put a lump of butter on the end of the knife and place it in his mouth where he breathed over it to warm it up!  Feeling sick, and thinking about how many sandwiches she’d eaten at afternoon tea there, she tottered home and swore blind she would never enter the hotel again – and I believe she never did.

Years later I met up with several of my grandmother’s friends.  One, a widow, Mrs Humphries-Davies, used to scare me.  I once mentioned her former husband and was greeted with, in a very imperious voice, “Oh, my dear, he was eaten by a lion in !”  She had a stuffed lion’s head fixed to the wall near the bathroom.  It was sort of hidden round the corner of a dark corridor and it always gave me a shock when I headed to the loo.  I never dared ask if that was the offending lion!

My mother was one of those lovely people who really enjoyed seeing people.  She always said that if someone came to visit you stopped everything you were doing, especially if it was house-work, because that was always there but the people were not. She was a shocking cook, having never learnt.  My grandmother did not believe in her daughters doing anything practical, she also afford servants!  Mother used to count heads and feed whoever was there, with some disastrous results.  On one occasion she lost me a boyfriend!  It was an evening when several people did turn up unexpectedly.  We were having a beef stew for supper and there wasn’t enough to go round.  It was in the days of the little