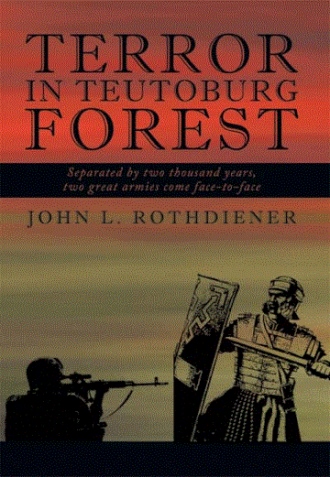 When they reached the top of the hill, the group came to a rapid halt. They stood hidden in a large grove of trees, where they had a perfect view of the valley. Matt ordered his dogs to sit. The small band of soldiers searched the valley below and heard a faint, rumbling sound. The noise grew louder as they watched. They realized they were listening to the footsteps of twenty thousand marching men, the pounding hooves of thousands of horses and the clatter of hundreds of wagons.

Then the massive army came into view slowly, as it turned into the canyon. It was exactly as Matt had described. The men sat breathless, watching in complete silence, as the scene unfolded before their eyes. Slowly, each formation, consisting of about five hundred soldiers came into sight. It was truly remarkable—endless lines of men marching in sixteen-man formations. The line continued for miles and the sound grew louder.

Excitement was written all over the professor’s face. Most of his life he studied Teutoburg Forest and the battle which took place. Now he was living it, as he watched the Roman army march into view below.

Finally he spoke, telling the soldiers what each formation consisted of. “This grand army consists of three legions; the 17th, 18th and the 19th. Caesar Augustus called them, ‘the Pride of Rome.’ Each legion consists of six thousand troops.”

As he looked down at the mighty army, the professor

still couldn’t believe what he was seeing.

Arminius spoke up suddenly. “There,” he pointed toward the slow moving gigantic army. “Varus, on pale horse.”

The captain looked though his binoculars for a close-up view of Varus. As he passed the binoculars to the professor, the captain remarked, “I think this is something you have only imagined in your life. Take a good look at the general of this mighty army.”

The professor anxiously took the binoculars and focused on the man he had studied much of his life. He was not as big as he had envisioned, but certainly looked the part of a Roman General dressed in his battle gear. A dark red vest covered his chest. The professor had seen many paintings of Roman generals and realized he looked perfect for the role. He was clean-shaven, with a large nose, typical of a true Roman. His complexion was light, also characteristic. He looked proud and confident on his horse.

The professor noticed how close his bodyguards were to him. There were about a dozen men riding beside and behind him, always alert to their surroundings.

The captain finally spoke, “You know Professor, I could order one of my men to cut him down, right where he is now.”

“An evil empire is determined to enslave them and take their land. I feel we have an obligation to stand and fight.” --Sergeant Matt Taylor, United States Army Teutoburg Forest, 2009 The Terrorist Assault Team’s orders were clear. They were to storm the house, capture the terrorists, free the hostages and contain the bomb. None of the twenty-six member, highly trained TAT team was prepared for what would take place on that hot August night. Through a bizarre chain of events, these GI’s lives would change forever. They would be forced to choose between a new life or fight for freedom in a way they never imagined. “Varus, Varus give me back my legions.” --Caesar Augustus, 9AD Teutoburg Forest, 9 AD One of the greatest battles of all time took place in Teutoburg Forest in 9AD. When it was over, more than twenty thousand seasoned Roman Soldiers were dead. How could a poorly armed, undisciplined group of Germanic warriors defeat this mighty foe? What happened to Varus, the general of the Roman army and his famous soldiers is revealed in this thrilling plot. This is the unknown story of how the battle is fought and how it became a turning point in history. Terror in Teutoburg Forest Relive the battle that helped shape the world, as we know it today. This gripping account of how the onslaught occurred is skillfully captured in this exciting historic novel, Terror in Teutoburg Forest, related by author John L. Rothdiener.

John L. Rothdiener is a novelist who lives in Bolivar, Missouri with his wife, of thirty-six years, Joy. He writes from a life-long love of history. A few years ago, an article about the battle at Teutoburg Forest triggered the idea for this book. John was stationed in Germany while serving in the United States Army. He enjoyed visiting his ancestor’s homeland and hopes one day to visit the site of this great battle.