The Tears I Couldn't Cry 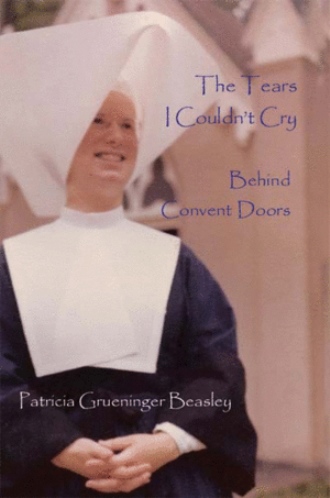 At the age of three, I was promised to God.

At the age of forty-one, I stood on a hill overlooking , letting the wind run its fingers through my hair for the first time in twenty-two and a half years.  Its gentle caress rippled through my body from my head to the tips of my toes.

A small bird flying overhead caught my eye.  “Be grateful you fly free,” I whispered.  Deep in my soul I was that bird.  I had always been that bird.  Now, finally, I was free, too.

Inhaling deeply, I gorged my lungs with the air that symbolized my freedom, air saturated with river smells of fish and crabs.  And it was more satisfying than the rarest perfume.  I thrilled to the sounds of nature bombarding my ears in a strange new way.  Had I never truly heard them before?  Or were my senses just waking up, because … for the first time in my adult life … I felt no guilt for loving the sensations I was feeling?

It was a spring day.  I wore a sleeveless, beige blouse and the matching wraparound skirt my sister Carole made just for the occasion.  Sand-colored sandals replaced my black oxfords.  It felt exotic to be wearing colors other than navy blue and white.  Beige, suddenly, was exhilarating!  Still it would take a while for the full impact of my decision to sink in.

Until today, I had been a woman obsessed with keeping promises.  The promise my Mother made when I lay dying.  The promise I made to my former teacher, a Sister, to stop fighting God’s call.  Years and years of promises in the form of vows made in a religious order of Catholic women that clung to its seventeenth-century identity – well into the twentieth century.

I struggled for what seemed an eternity to live a life dedicated to an ideal filled with contradictions.  I turned myself into my own betrayer, intent on silencing the voice of my frustrated womanhood – before it could incite an all-out mutiny.  I refused to allow my imagination the fantasy of falling in love and being cherished, marrying and giving birth to my own flesh and blood.  I denied myself the pleasure and comfort of touching and being touched, by shoving beyond my reach the hugs and kisses I was starving for.

My Superiors systematically squashed my passion for art and music, assigning and reassigning work duties according to their own perceived needs, which they called “for the common good.”  What I wanted was never a consideration.  Their will replaced my dreams, and they called it God’s Will.

Obedience pervaded every aspect of my life:  how I walked and talked, how I ate and slept, how I thought and related to people.  The vow of obedience removed decision-making from my life.  I had only to obey blindly and believe that my Superiors spoke to me in God’s Name.  And, in doing so, I severed blood ties and lost the family I loved.

With my vow of poverty I received no paycheck or social security.  I owned nothing.  I was assigned two Habits, the name for the Order’s customary garb, and I shared everything else.

In fulfilling my vow to serve the poor, I strained to give every ounce of my energy.  I listened.  I counseled.  I taught.  Ignoring my own needs, I wore myself out trying to relieve humanity’s ills.

Relentlessly, I fought the female drives I boarded up within.  While my virginity remained intact, it was not without agonizing struggles with chastity.  I suppressed every yearning for male companionship.  I repressed the attraction I felt toward the men whose paths crossed mine.  And I spoke of it to no one.

I came to feel like a bird locked in a cage in the all-justifying Name of the Lord, until I felt my heart, too, would break.

Pat’s incredible story takes readers on a terrifying journey through 22 ½ years of convent life in 20th century . Promised to God when she was dying at age 3, she eventually enters a Catholic order of women where she is controlled by rigid rules and must wear a cumbersome 17th century habit … looking like a “flying nun”.  During 3 years of “formation” she is stripped of her own identity and forced into a mold.  She must give up the family she loves, while her Superiors squash her passion for art, music, and nature.

She must live under vows that require blind obedience, no pay for her work, and untainted celibacy.  All of these sacrifices are demanded in God’s all-justifying Name.  Leaving the convent would be turning her back on God and risking eternal damnation, Superiors say.

After reading Pat’s true story, readers are faced with a question:  Was Pat, and thousands of other women like her, abused by the very religion they loved?

Emmy-award winning screenwriter and one of Pat’s mentors, Vickie Patik, says, “THE TEARS I COULDN’T CRY is a triumph of the human spirit and an inspiration to anyone who is working up the courage to question cherished beliefs and seek closure through honest reflection and self-healing.”

Barnaby Conrad, co-founder of the Santa Barbara Writer’s Conference and its co-director for 33 years says that Pat has written her story “that is terrifying and beautiful … and VERY moving.”

Following her years as a Sister, Pat Grueninger-Beasley settled in , where she took a temporary position with the North Carolina Job Service, before the late Louise Wilson hired her as Counselor/Coordinator of the Experiment in Self-Reliance’s high school drop-out program for low-income young people.

Eventually, she became a Human Relations Specialist for the City of and was elected vice-president, then president, of the chapter of NAHRW (National Association of Human Rights Workers).

In 1988, Pat married Karl Beasley and settled in the magnificent Southwest.  She returned to teaching and commuted between and the , followed by a teaching stint at the local public school.

After retiring from teaching, Pat became a freelance writer for a county newspaper and an author.

Pat lives with her husband in , where she delights in nature’s beauty and cares for animals.  She treasures her bonds with the Navajo and Apache Indians of the nearby reservation.