"God is Alive/God is Real"

"The Two Days That Changed My Life Forever" 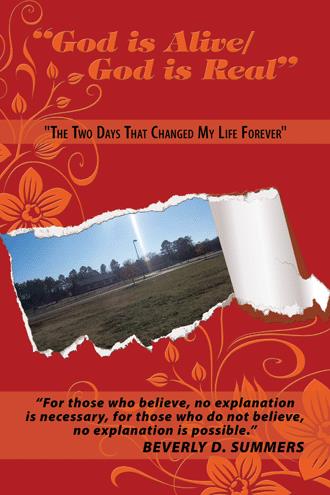 This novel is written for believers, for those who know God is Real.  There has never been doubt in my mind, God did not exist, now I know as proof, God is Real.  The occurrence that took place in my book which I have written is authentic.  Nothing has been altered, nor fabricated.  My book is written to strengthen Christians, to know we serve a sovereign God, and we can do all things in Christ who strengthens us.

written to give Christians encouragement and strengthen their faith

dedicated to the believers who know that God Is Alive, and God Is Real

I am not a writer, I do not know how to begin to write a novel.  I have a story that must be told based on facts.  It's not based on a dream, imagination, nor coincidence.  My novel tells the story when God's (Holy Spirit) came to me in Birmingham Alabama, on January fifth, and sixth, two-thousand eight, on a school ground and left physical evidence.  It takes place during a cool month of around fifty-five degrees over a two-day period.  We are living today in a turbulent world where there is so much uncertainty, some feel hopeless, and some are losing faith.  I come to tell them today, "God Is Alive and God Is Real"       "Two Days That Changed My Life Forever"

My name is Beverly Deloris Summers.  I was born Beverlyn Deloris Blair.  Some call me Belle or Bev.  I prefer Beverly.  I was born in the South, Birmingham Alabama, to the parents of Mr. John Ora, and Marie Latimore Blair Sr.  I was the seventh born.  Growing up, my family became members of Mt. Calvary Baptist Church.  We attended Church and Sunday School every Sunday.  I sang in the choir.  I got baptized and received Christ at a very young age.  Growing up, I was intimidated by my elder sister.  She was very manipulative.  I would do anything she'd ask me.  My sister would hide to smoke and drink.  One day she said to me, take a puff and a sip.  I choked, the drink taste bad, I decided that neither was for me.  She would swear, it sounded awful.  I knew those words would not be used in my vocabulary. As time passed, we grew up and went our separate ways.  I moved out-of-state.  After my dad's passing, I came back home moved with my mother and younger siblings.  I became a member of my mother's Church.  Later, I moved, got married, became a mother of four.  After having children I had a weight problem.  I joined a gym and started a walking program.  I'd walk inside gym tracks, school tracks, any form of exercise to keep off the weight.  As time passed, I divorced, moved, worked two jobs to provide for my children.  In two-thousand one, I visited  The Guiding Light Church, felt the Holy Spirit presence, became a member the same day.  Over the years I've grown to have a very close, personal relationship with God.  January fifth, and sixth, two-thousand eight my life was changed.