The Adventures of Fearless Fran in the Land of the Gods 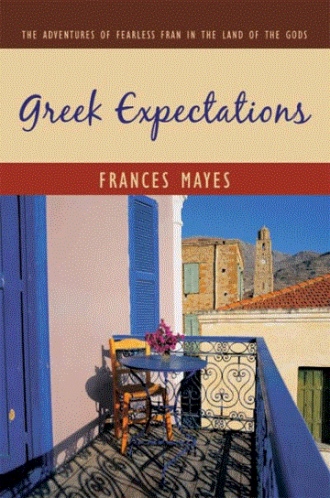 Out in the car, on the way to a beach during my day off, we were negotiating the narrow steep hill, with difficult camber and rather deep edging ditch which had caused me trouble on my trial drive in December.  But we were coming down, and had reached beyond half-way, when a green car passed on the other side, quite safely, to be suddenly and alarmingly followed by a great sparkling flash in the sky, and the appearance 'out of the blue' of a blue car, as if dropped from above (true actually!) slewed diagonally across the narrow road, blocking it completely.

As our astonished family watched open-mouthed, a young man leapt out of the apparition, amazingly unharmed: good heavens, he must have been wearing his seat belt!  He proceeded to remove his baseball cap and hurl it to the ground, then started kicking the car accompanied by suitable Greek oaths.  Well, it was plain that the family outing was going nowhere, so I got out to offer some assistance.  Luckily, the youth spoke English quite well.

'Please, please can you take me to my father?' he pleaded.

'But where?' I enquired.

My bemused and slightly shocked family were waiting.

‘Sorry guys, why not get out and sit on the side while I see what I can do?

'We can’t go anywhere for a while anyway.’ said Thomas

Despite my lack of Greek, I had already established that I and the young man could communicate, and as we drove he proceeded to explain the reason for his plight.  It seemed that this was his mother’s car, and he was very anxious to get up the hill to summon his father (as it emerged, hoping to have Dad there before the Police got wind of the accident).  I had studied the car, which had little glass left.  It did not look too bad on the offside, but a quick look at the nearside produced an involuntary gasp, and a perfect illustration of the term ‘mangled’.  As he continued to relate what had happened, the reason for his particular nervousness emerged.  He was only 16, and had no driving licence, nor, of course, any insurance.  On we drove, up past Elsie’s estate and along the cliff road.

Crikey, how far is this guy’s house? I thought, as we bounced along unfamiliar and questionable roads.

The night before Frances Mayes left to come to for the first time, her old school comrades at their 30 year reunion named her 'Shirley Valentine'.  fulfilled that role by finding a new enthusiasm for life, and a number of jobs, from teaching English, to caretaking an estate, to working for a holiday villa company.

Encouraged to write by the good reception for her work on the local English language paper, relates this first part of her memoir, which covers her life in 3 very different Greek places, and adventures ranging from hilarious to hair-raising.

Fran is a sort of 'Everywoman' learning to deal with and its people - wonderful, beautiful, free and friendly - but often maddening and frustrating.

On the cover is the fabulous house that Fran and Dad bought, where visitors can stay   www.halkimouthouria.com

Frances Mayes had been planning a book of her experiences in Greece for some years, encouraged by many who found her letters and emails well written,and her turn of phrase telling a story very entertaining.

And then there was the irritation of that book 'Under the Tuscan Sun' by her namesake, about which she kept getting teased, strengthening her resolve to show what this Frances Mayes could do.

But the notes she kept never got expanded into a story until she had served her 'apprenticeship' as a journalist on the local English language paper, 'The Halki Visitor' which was started in 2002. Frances remained Editor (effectively sole researcher, author, photographer and advertising executive), till the last issue of 2005.  The workload of running her own craft/gift shop, being a landlady and working for a travel company came to mean that the pressure of editorship was too much, so she became local correspondent for the paper, still submitting articles and photos.

Before all this, in another life, Frances was first an Honours graduate in English, then a librarian, before retraining as a teacher. She combined this with being a wife and mother, having 2 sons.  During her 10 years in the teaching world, she gained, by thesis, her MA in Education - so Frances is an academic writer too. During this time she was overtaken by divorce, and by the urge to fulfil a long-standing ambition to teach English abroad.

Once in Greece, she followed many opportunities which opened up. Even things which seemed to go wrong were really going right. Fate was sending Fran to discover the wonderful little island where she and her Dad now have a beautiful antique house, and Fran a business which satisfies and exploits her creative and artistic talent.