The Old West Adventures of Ornery and Slim 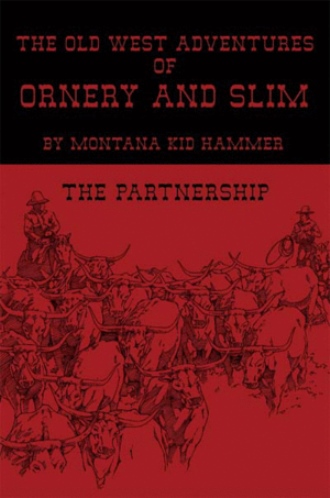 Chapter 2 - "An Arrow Shirt and a Cup of Coffee" Whoosh! An arrow flew past and stuck in the trunk of the tree right next to Ornery. He rapidly filled his right hand with his old Colt ‘73 Cavalry revolver and rose to his feet in the flash of an eyelash. With the lightning slip of his thumb and trigger finger, he shot with deadly precision at the swiftly approaching camp encroachers like in the day when he was a mounted trooper. Slim swept the brass-framed Winchester “Yellow Boy” lever rifle from his lap and stood up as quickly as his partner. Slim barely heard the tin cup in his lap, or felt the warm coffee splash, as the cup tumbled down to the ground, when he stood and to put that rifle to his shooting shoulder. Slim anchored his feet in place but felt something ever so lightly tug his right shoulder back a bit. Ornery yelled, “How many o’ ‘em do ya’ see out there, lad?” “Three, four…no FIVE!” hollered Slim, as almost everything disappeared into a... Chapter 9 - "A Bad Day and a Good Friend" As the gunfire intensified upon Slim, he grumbled to himself how he hated being away from ranch house, cuz’ o’ this very reason”, being shot at on the job. Slim’s grumblings were pretty normal at this point in his new craft. Ornery was away to town and Slim pondered how he was gonna get out of this with his hide? It wasn’t that Slim didn’t love being a cowman out west. However, he didn’t want to die out west, at least not just yet. In his favor and survival, he’d his favorite shooter, his ol’ 1866, First Model Winchester lever rifle at his side. A highly tarnished brass-framed lever gun and, admittedly he “singled outta derned fine tree to guv hisself cover,” for the moment. For the time, Slim was pleasured with his given troubled state of affairs. He didn’t cotton* to or care for this “high profiled lead-slingin’ contest”, as Ornery would called this “fit and fix”. 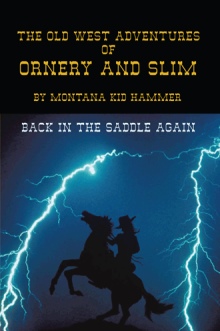 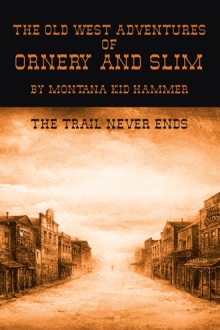 This historically based fictional novel tells on a pair of working cowmen and their exploits in the American old west. This story chronicles a veteran cowhand, Patrick O’Connor, (Ornery) and his tenderfoot saddle partner, Francis Slimmery, (Slim), and how they made their way west to come into the steady employment of the ranch known as the, “O U T (Oh-Ewe-Tee) Spread”. Further told is how the two main characters come to deal with life, contending; with their critters (cows), the elements of nature, the lay of the land, outlaws, wildlife, their friends, calico-friends, and each other, all the while toiling to tame their corner of the prairie west. Conveyed are the simple, but oft’ humorous and life like escapades of these two laboring cow-saddlers, as they commence to ply their cow craft for the “brand”. The setting for these accounts is far less fictional, and transpires on the very real North American frontier, circa 1880’s. Told about as well is the time-honored cowboy code, one pervasive to the people of this era and played out by the two central figures. These tales dabble in the daily deeds, trials, and tribulations of nearly every aspect of a cowman’s existence during that period. The anecdotal activities are set to expose the full range of endeavors, from the slow and arduous boredom of ranch chores, to the split second moments of hair-raising and life-threatening perils oft’ encountered along the trails. The chapters in this story are intended to rekindle the feeling of an old west evening around the campfire, filled with tales of cowboy adventures, escapades packed with; love and luck, kinship and hardship, calamity and triumph, wisdom and self-exploration, all via the exploits of these two saddleback heroes and their friends. All this, and shared in the old-fashioned American story-telling tradition.

Montana Kid Hammer, ‘Kid’, originally a Montana-native, is an author and educator who lives just north of Fairbanks, Alaska. He enjoys horseback riding, snow skiing, hunting, reading history and cowboy action shooting. Kid has a family; five children, two grandchildren, is retired military, and has lived and traveled in the region of which he writes. Kid is a recent graduate of the Institute of Children's Literature, is self-published locally with an old west short-story volume, and has produced professional-technical submissions for the United States Air Force-Air Education and Training Command. He is also a NRA Certified Instructor and a member of both the Single Action Shooting Society and the Golden Heart Shootists.